Trade of the Decade: Buy THIS in the Corona-Crash | Investors Alley

The U.S. economy remains mostly shut down to combat the spread of COVID-19. Only history will tell if the politicians got it right. One thing we know is that the shutdown did produce a stock market crash. The challenge now is to find investments that will provide superior returns in what will become the new normal.

I suggest that the place to look for great future returns will be in the stock sectors that crashed the hardest but still provide essential services.

A look back at the 2008-2009 bear market shows that picking stocks of good companies with share prices that almost disappeared provided great returns over the next several years. One example I use is the case of Aircastle, Ltd., a commercial aircraft leasing company. At the bottom in March 2009, Aircastle shares traded less than $3.00 per share. Two years later, it was $11.00. That’s a 230% winner! (Full disclosure, I’ve been in and out of Aircastle the past several years now and the last time we bought and sold as part of the Dividend Hunter we made a 63% gain in about five months, plus scooped up some dividends.)

In the current crisis plus crash scenario, the energy infrastructure companies have suffered a triple-whammy of bad news hits. The result was share prices that dropped by as much as 90% in just two months.

The energy sector started falling early. When China announced the coronavirus outbreak in early January, crude oil began to fall on the expectation of demand destruction in China. While energy midstream businesses are not usually affected by the changing price of crude oil, stock prices are.

By late February, the U.S. stock indexes were still setting record highs. Then the markets realized that drastic measures would be needed to stop the spread of COVID-19 in the U.S. The major indexes fell by over 30% in a month. The already falling energy sector stocks continue to decline with the rest of the market.

The market fall triggered a liquidity event in the various high yield investment sectors. Before the crash, leveraged investment strategies using stocks from the high yield sectors were popular. You could find exchange-traded notes (ETNs) and closed-end funds (CEFs) that leveraged up portfolios of business development companies (BDCs), real estate investment trusts (REITs), master limited partnerships (MLPs), preferred stocks, and other similar high yield groups. Some discussions I have had indicate there were numerous hedge funds also using this strategy.

As stock prices started to fall rapidly, these funds quickly became over-leveraged. To get the leverage back in line, the funds were forced to start selling. The selling led to further share price declines, which caused even more selling. By the time the high-yield sectors found a bottom on March 18, stocks in these groups had dropped by up to 90%. The Alerian MLP Infrastructure Index (AMZI) lost 69% of its value. The AMZI tracks most of the U.S. energy infrastructure space.

Share values in energy infrastructure have recovered in the weeks since the mid-March lows. However, after a 90% drop, a doubling of value still leaves share prices down 80%. The market forces, instead of fundamental forces sell-off in this group, puts investors who buy now in a great position to earn attractive yields and massive capital gains over the next few years. Here is one idea from the group.

EnLink Midstream LLC (ENLC) dropped by 85% in the first two-and-a-half months of the year, reaching a low of $0.88 per share.

The share price has more than doubled off the low, but even at $1.90 per share, the market cap is less than the annual EBITDA run rate.

The stock should trade to give a market value of six to eight times EBITDA.

$10 per share is a reasonable expectation for a future target price. Right now, after a 50% dividend cut to preserve cash, ENLC yields 19%.

Distributable cash flow provides four times coverage of the dividend, so it is secure.

Do NOT Collect Another Dividend Until You Read This

Please hold off on collecting your next dividend payment until you read THIS.

With one small change in your brokerage account you can set yourself up to collect 5x... 10x... even 25x more dividend income down the line...

Take a look at the difference this makes in your potential income: 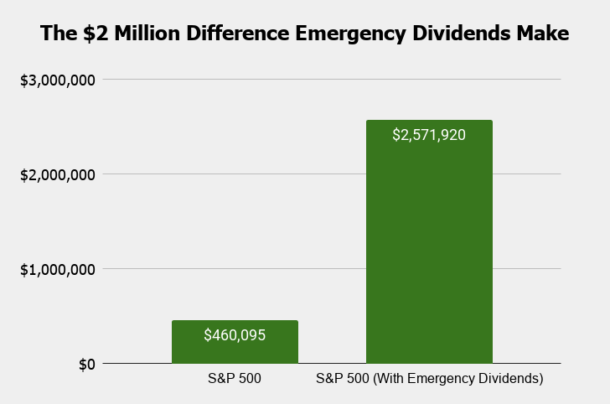 And all it takes is one change in your brokerage account...

But you have to hurry - Big Government recently put tight restrictions on advertising this secret...

And with coronavirus ravaging the market this could be your last chance...

Click here now to read all the urgent details.

If you're at or near retirement age, you can't afford to wait.