The Trade to Make On a Volatile U.S. Dollar | Investors Alley

We’ve finally reached the end of 2020, and I don’t think anyone is complaining about leaving this year in the dust. After all, the coronavirus pandemic wreaked havoc across the globe and made life miserable for a vast majority of the world’s population. Let’s all hope that 2021 is going to a much happier year.

For most investors, 2020 likely wasn’t too bad. The market crashed in March but climbed back to new highs by the end of the year. Moreover, the investment community saw a massive influx of new investors, as many people were stuck at home with nothing better to do but play the market. (Having commissions on trades virtually disappear didn’t hurt either.)

One investment topic that hasn’t gotten all that much attention is the movement of the U.S. dollar. After a few years of almost no volatility, the U.S. Dollar Index has fluctuated substantially this year. So, where is it headed in 2021?

For example, you may expect the dollar to weaken because of economic issues in the U.S.; however, if other currencies weaken even more, an investment vehicle that tracks the dollar may go up. The value of a currency is always relative to other currencies.

Moreover, multiple factors can influence a currency. Is the economy improving? Is the central bank pumping liquidity into the economy? Is there demand for the currency as a reserve investment? That’s just a small portion of the variables that can impact a currency.

One popular way to trade the dollar versus other currencies is through the Invesco DB U.S. Dollar Index Bullish Fund (UUP). UUP is sitting right at its 52-week lows as we head into the end of the year. However, at least one large fund or trader is placing a big bet that UUP will rebound by the first week of January.

The trade that caught my eye was an opening trade of nearly 20,000 calls, traded in a block. With UUP at $24.35, the January 8 24.50 calls were purchased for $0.10. With the December holidays, this is less than a two-week trade. Even so, UUP options generally don’t cost much due to how little volatility there tends to be.

Nevertheless, the ETF can certainly move more than $0.25 higher, which is what would have to happen for this trade to break even. Anything above $24.60 is profitable. Considering UUP was trading at nearly $25.50 in early November, it’s certainly not out of the realm of possibility for this trade to succeed.

My best guess is this trade is tied to the Georgia election on January 5, which will decide the United States Senate’s majority. The trader or fund making this trade believes the dollar could move higher based on the election result. For just 10 cents per option, it certainly seems like a reasonable way to make a play.

FREE SPECIAL REPORT: How To Generate +$500/month Income With Options 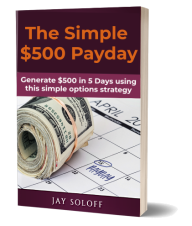 Today I want to give you a brand new special report on options trading, for free!

The free report reveals how to generate upwards of $500 every month.

Here’s a quick glimpse inside...

This is perfect for you if you just want to get your feet wet with options...

Or if you’re just looking to add an extra $500 or more to your cash flow every month.