Are Chinese Stocks a Buy Under a Biden Presidency? | Investors Alley

There’s a whole lot to unpack from last week. After five days of waiting for definitive numbers, media outlets have called the presidential election for Joe Biden. Senate control may take until January to decide due to two runoffs in Georgia. In other words, the market has plenty to digest.

Before we talk about trading opportunities, let me step back and say recent market volatility has been good for trading. In my flagship Options Floor Trader Pro service, we recently booked gains of 125% on Brandywine Realty (BDN) puts and 94% on Amkor Technology (AMKR) calls.

Back to the election and its aftermath… a Biden win seems like a good thing for Chinese companies. Keep in mind, the trade war with China was based on tariffs and was mostly unpopular among U.S. companies whose margins shrank due to higher import prices for Chinese goods (or having to switch to imports from other, more expensive locations).

Biden is likely to reduce or eliminate many of these tariffs, which should be a boost for U.S. importers and a boon to Chinese stocks. In fact, even before Biden took to the stage in Wilmington, Delaware, to deliver his victory speech, you could see what iShares China Large-Cap ETF (FXI) had done. The popular China proxy ETF went up 7% over the last week.

Options action in FXI is also skewed heavily bullish, which is no surprise given how the stock chart looks. At least one trader is moderately bullish on FXI for the next couple of weeks and is using covered calls to express that view.

What’s more, the position can still earn stock appreciation up to a cap of $49. That’s another $1.17 of potential upside should FXI continue to rally. So, if FXI moves sideways for two weeks, the trader will earn about 1%. If FXI drops, that 1% yield provides some cushion. Finally, there’s an upside potential of up to $49.

This position seems like a reasonably safe way to be bullish on China over the next couple of weeks while also generating a small yield. Covered calls can be valuable tools to use to take positions like this and increase yield while still allowing for some stock appreciation.

Looking for The Next NIO?

One of the more interesting stock market stories has been the rise of TSLA challenger NIO. Shares for both have been loosely correlated for most of last year... until the stock was upgraded by JPMorgan. 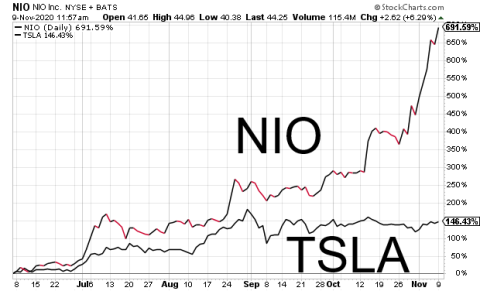 Trading volume and options activity have taken off creating some interesting trade set-ups. Here's how I'm finding those trades and making them with extra cash sitting around the house. Click here for details.