Do you believe in the power of positivity?

If so, roll up to Wall Street… because it’s abundant.

According to the Wells Fargo/Gallup Investor and Retirement Optimism index, investor optimism is at its second-highest level.

But one group hasn’t quite joined the full party. A group that may surprise you – and give rise for cautious optimism going forward…

Don’t Sleep on the Small Caps

For some investors, the mention of “small-cap stocks” triggers fear in itself. They assume the stocks are riskier.

These small-cap companies (with market caps between $300 million and $2 billion) are often the lifeblood of American innovation and entrepreneurship. They also lead the biggest rallies from downturns and recessions, as investors feel the same optimism that prevails at the moment.

Yet small caps have underperformed this year – the Russell 2000 is up just 11.7%. So why are they lagging?

As Rob Isbitts notes in Forbes, “… the S&P 500’s gain this year was powered by relatively few companies” and that “… most of those companies were among the largest stocks in the S&P.”

Indeed, the largest 30 stocks have accounted for half of the index’s gains.

By contrast, the Russell 2000 isn’t as skewed towards big, dominant companies. As Isbitts reveals, “The largest weighting in the Russell 2000 for any company at the start of this year was 0.26%. The S&P 500 had more than 80 companies with at least that much influence on the index.”

So don’t sleep on small caps…

Where to Look for Small Cap Gains

Quoted in CBS MoneyWatch, Francis Gannon, co-Chief Investment Officer at Royce & Associates, says the “global economic recovery should benefit some of the more economically sensitive or cyclical areas of the market” – like small caps.

Specifically, he says globally exposed small caps are compelling, as “there’s a leg there from an earnings perspective that investors are missing.” 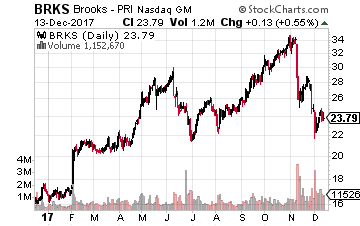 Brooks Automation Inc. (Nasdaq: BRKS): Selling its products in 50 countries, Brooks is one of the firms leading us into a more automated world as technology improves.

Related: 3 High Growth Stocks for the Rise of Robots

The company provides automated solutions for the semiconductor manufacturing and life sciences industries.

Both the net and operating margins sit around 10%, allowing Brooks to pay a $0.40 per share annual dividend (1.6% yield), with a comfortable 45% payout ratio.

And unlike many smaller companies, Brooks is actually less volatile than the overall market, as indicated by its beta under 1.0.

BioTelemetry Inc (BEAT): Name one area that’s never going to go out of business. If healthcare isn’t at the top of your list, it should be.

BioTelemetry is a small cap wireless medical technology and research company, focusing on cardiology. And it’s at the cutting-edge of more accurate and effective patient care.

That care begins with the company manufacturing wireless, non-invasive cardiac monitors. It then works with hospitals and clinics to analyze and diagnose heart disorders in a faster, more efficient way, as its devices can monitor patients remotely.

Healthcare is an expensive business, but BioTelemetry is working hard to provide more efficient care, while controlling costs. And needless to say, its mission is proving popular and having an impact on the bottom line.

With 16% revenue growth in the last fiscal year, net income growth shot up by 619%, to $53.4 million. Margins sit comfortably in double-digit territory, which exceeds its rivals. And like Brooks, BioTelemetry also has a beta under 1.0.

The company is expanding, too. In early December, it announced a partnership with Apple to provide cardiac monitoring for the new Apple Heart Study app. Working with Apple Watch, it will detect for irregular heart rhythms and atrial fibrillation.

This follows the completion of the $280 million buyout of Switzerland’s LifeWatch AG in July – a deal that boosts BioTelemetry’s leading presence in remote cardiac monitoring, given LifeWatch’s similar work in digital health systems and wireless, remote diagnostics.

While small caps in general may have lagged the broader indexes, these two crucial companies are bucking the trend. And they’re well positioned for further success in 2018. The fact that they’re less volatile than the overall market sweetens the deal for risk-averse investors, too.