What To Expect From Gold In the New Year | Investors Alley

Despite the rapid approach of the holiday season – with plenty of investors going on vacation – there has still been plenty of financial news to contemplate. Of course, the biggest news item in the world of investments has been the rapid rise of the price of bitcoin, along with the launch of bitcoin futures. 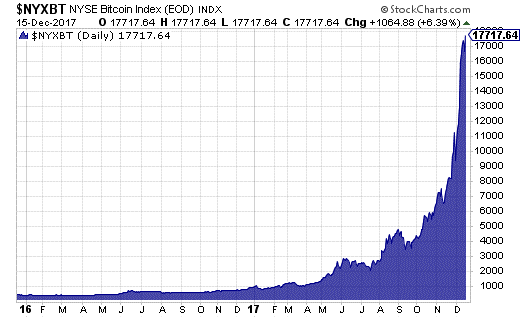 Actually, “rapid rise” is putting it mildly, as the price has basically gone straight up. The craziness and popularity of cryptocurrencies is probably why we’ve heard almost nothing about gold. It seems like a long time since the masses were clamoring for every ounce of gold they could get their hands on.

These days, gold is barely an afterthought. Who needs precious metals when you can buy bitcoin… or so it seems.

Of course, many investors know better than to fully write off gold. Interest in the yellow metal has always been cyclical There’s no doubt gold will rise again, probably about the time this whole cryptocurrency bubble bursts and investors start panicking.

At least one big options trader is very bullish on gold as early as next month. He or she executed a sizeable trade in January options of SPDR Gold Shares ETF (NYSE: GLD) called a risk reversal. This strategy uses premium from short puts to help finance a long call positon.

Once again, it’s extremely bullish and a bit risky depending on your perspective. The risk reversal can lose the call premium on a down move and even more on the short puts if the price of GLD drops below the short put strike.

On the other hand, if you believe there is a floor to how far gold can fall by January, this type of strategy can be a good, cheap way to bet on gold’s upside.

The best part is the risk reversal collects a small amount between $115 and $124, which is a pretty wide range. Basically, it eliminates the negative effects of time decay while still allowing full participation on the upside.

Moreover, gold likely does have a floor as GLD hasn’t been below $115 in almost a year. Plus, with the cryptocurrency mania and other political events, investors aren’t going to stray too far from gold. Gold may be ignored right now, but it isn’t forgotten. 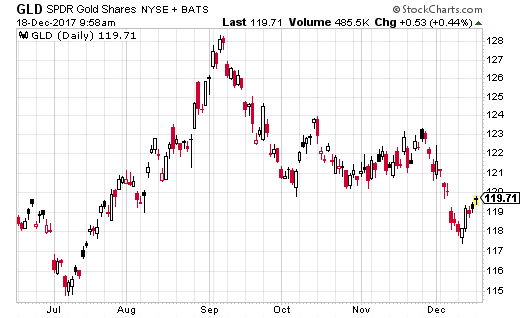 If you’re bullish on gold, you can skip the risk reversal since you likely won’t be trading 2,100 contracts. Instead, buying the calls straight up isn’t a bad idea with how cheap they are right now. The January 120 calls are only trading for $1.00. Getting to $121 (the breakeven point) seems like a very reasonably possibility with a month to go to expiration.

This “21st Century Pension Plan” Pays You Income FOR LIFE