What a week for technology stocks.

Given that “technology stocks have been at the forefront of equity market gains and are pivotal for keeping the momentum going,” according to Rebecca O’Keeffe, head of investments at Interactive Investor, there’s little doubt that investors are paying closer attention than usual.

Great stuff, for sure.

Those are still impressive returns.

The point here? Don’t get sucked into the headline news and only look at tech’s biggest names. There are profits elsewhere, too. For example… 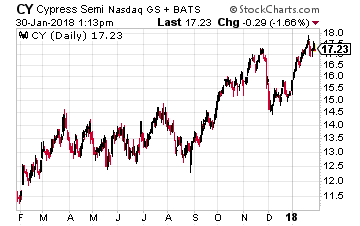 And there’s more to come…

Could Cypress be on the block, too? According to El-Khoury and CFO Thad Trent, it’s more likely that it will be buyers if the right opportunity arises: “Even though we were sitting on the sidelines [in 2017], we’ve been actively evaluating targets continuously,” Trent tells The Street. That being said, KeyBanc Capital Markets pegs Cypress as one of its top two takeover targets this year.

Connected Cars: Our cars aren’t just cars anymore. They’re mobile computers. The trend towards “infotainment” is gathering pace, with the market projected to double over the next five years.

Cypress is front and center of it. The chips it makes are crucial for car connectivity and IoT solutions. And with the amount of in-car electronics rising significantly, it’s a lucrative market.

Earnings: Cypress announces its fourth-quarter and full-year earnings today. It’s already beaten expectations in four straight quarters – including Q3 2016 revenue and EPS that jumped by 15% and 80%, respectively, as its IoT business surged.

The company also supplies the USB-C controller to Apple for the new iPhone, as well as 78 PC models (a number that will rise to 120 this year). Cypress’ already owns one-third of the USB-C market – with growth projected to catapult at almost 90% per year until 2021. Its third-quarter USB-C revenue doubled, ahead of the iPhone launch.

This time around, quarterly projections call for overall company revenue of $593 million and EPS of $0.25 – up 11.8% and 66% over Q4 2016, respectively. The company may well beat those estimates again, given that it already notched most of its quarterly revenue just one month into the quarter.

While big tech companies tend to grab most of the headlines, some of their businesses wouldn’t exist if it weren’t for “behind-the-scenes” firms like Cypress that make crucial components.

In Cypress’ case, its position as a leading chipmaker puts it on the leading edge of several huge, long-term tech trends like the IoT, connected cars and homes, Big Data, plus the ongoing ubiquity of mobile devices and network connectivity.

The future looks bright for Cypress – and its earnings today should underline that. With a PEG ratio of just 0.45, the stock is still considerably undervalued, too. The company also pays a $0.44 per share annual dividend – a 2.5% yield.