Soup’s Off: This Civil War-Era Giant Could Be Cooked | Investors Alley

It’s 18 years since I moved from England to America. And there’s one thing I’ve never got used to.

We’re used to clouds and rain, not sun and heat. And certainly not humidity! We’re way too pale and pasty.

I wouldn’t want it in a portfolio, either. 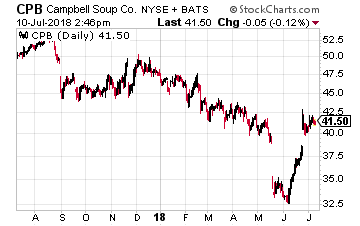 From Soup to Nuts (And Other Stuff, Too)

The actual name of the company is a bit misleading.

Around 80% of Campbell’s sales come from the United States. And in trying to boost those sales, the 149-year-old company (yes, founded in 1869!) adopted the “speculate to accumulate” adage last year.

It snapped up Pacific Foods for $700 million last May, plus the $6 billion acquisition of pretzel-maker Snyder-Lance.

What’s it done for Campbell’s performance?

The Bad, the Worse, and the Ugly

Simply put, the acquisitions have merely plugged holes in a very leaky boat.

In the first quarter, Campbell notched 15% sales growth. But according to Investor Place, 14% came from Snyder and Pacific, while the remaining 1% was currency gains.

The real story is that Campbell’s core business is flatlining.

Sales have dropped for the past three straight years. Over the past five years, average annual sales growth and net income growth are a paltry 0.5% and 2.4%, respectively. The company lost another $393 million in the last quarter.

Needless to say, that’s not a good formula. It would be even worse if not for Snyder and Pacific.

But while those two acquisitions have added sales, they’ve also saddled Campbell with a pantry-full of debt.

At $9.8 billion, the debt is over four times more than a year ago and is highest of the major food companies. It’s also terrible, given that its market cap is $12.5 billion (significantly lower than most of its rivals), interest rates are rising, and it has just $200 million in cash.

Unsustainable? The 88% payout ratio indicates the company is over-extended.

That debt and dividend are serious pressures if its fortunes don’t improve.

It’s not like the food industry is growing, either…

Zero Growth and a Tariff Punch

The reason: Intensifying competition from online retailers like Amazon (which owns Whole Foods, in addition to selling other foods) that has eroded Campbell’s so-called “legacy” brands and squeezed margins.

It’s a timely warning, with an industry-wide slump dragging many food stocks to cheap price-to-earnings levels that might lure many investors.

As aluminum and steel prices rise, Campbell has admitted its costs will, too – hence its lower full-year EPS guidance – from a 1% to 3% loss to between 5% and 6%.

Buy the Rumor, Sell the News?

Like I said with GameStop last week, the one thing that might rescue Campbell is a buyout.

In May, ex-CEO Denise Morrison retired and the company announced a complete strategic review of its business, including possible separation of operations. Speculation mounted that it was prepping for a potential sale.

Interim CEO Keith McLoughlin fueled rumors on the last earnings: “Everything is on the table. There are no sacred cows.” Campbell plans to announce the results of its review in late-August. 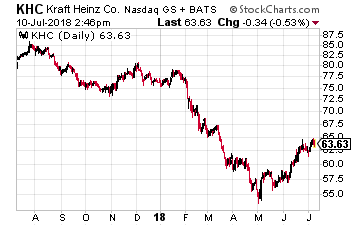 And on June 25, shares shot up 9% after a New York Post report said The Kraft Heinz Company (NYSE: KHC) is “very much interested in buying Campbell,” with the sale process set to begin. It also named General Mills Inc. (NYSE: GIS) as a potential buyer.

Why It Should: Campbell is under huge pressure and really needs help. It seems willing to at least explore possibilities.

Activist investor Daniel Loeb and his Third Point hedge fund are also in discussions with the Dorrance family (which owns over 40% of the stock) over a sale. Loeb reportedly sees Campbell as undervalued.

Why It Won’t: Campbell’s low-growth business and poor fundamentals aren’t attractive to buyers. It prompts the question of whether anyone actually needs it. 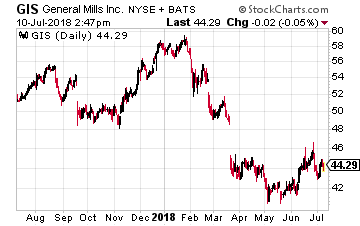 General Mills would pay a fortune for a company with approximately half its own market cap. And it already has soups in its stable.

Kraft ($77.2 billion cap) would also pay a hefty price. It also wants to expand globally and Campbell doesn’t fit the bill. As JPMorgan’s Goldman says, Kraft “might want the iconic brands” but would be “taking on an awful lot of risk. We’d be surprised if Kraft Heinz wanted Campbell, which does not solve Kraft Heinz’s growth problems… desire to buy top-line growth… Campbell has many issues… so we do not expect a deal.”

Be warned: Campbell buyout rumors have happened before… with no sale.

Ultimately, while it might be tempting to buy a potential takeover target… it’s risky.

Campbell is well-established and boasts “legacy” brands… but it’s in bad shape and hardly appealing.

Sales are lopsided, with its core business struggling… it’s losing money… industry growth is non-existent… and debt is sky-high.

With the stock down 17% over the past year (and 31% over the past two years) and having lagged the market over the past one-year, three-year, and five-year periods, no wonder 20% of the float is sold short. Of the 17 analysts that cover Campbell, 41% of them recommend a “sell.”

If a buyout doesn’t happen, Campbell is sitting on a zero-growth business and huge debts. And you’re sitting on big losses if you own the stock.