In case anyone forgot what a volatile market looks like, well October of 2018 is here to remind us. After starting out slow for the first week of the month, the stock market has pretty much been nuts since then.

How crazy has it been?Let’s take a look at the VIX.

The VIX is a popular index for measuring market volatility.The long-term average for VIX is around 20, so when the index is above that level, we are generally considered to be in volatile markets.However, we went through all of 2017 without the VIX ever closing north of 20, so even 15 was considered high in recent times. 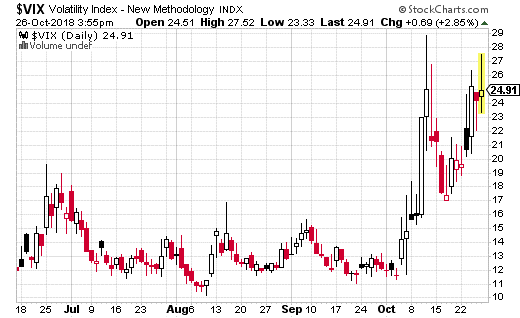 Well, these days 15 would be considered low.As you can see form the chart, we’ve spent most of October higher than 15 and about half the trading days in October over 20 as well.As we approach Halloween, we’re actually hovering around 25.Clearly, investors are worried.

Why the concern?There are numerous explanations starting with higher interest rates.We also have poor earnings from companies hurt by tariffs and slowing demand.And let’s not forget, we’re nearing the most important mid-term elections in a generation which happen to be the same week as the next FOMC meeting.

One popular safe-haven investment for investors concerned about the market is gold (and gold ETFs).Gold is particularly suited as a hedge against currency uncertainty.And, since higher interest rates will directly impact currency levels, gold seems like a good candidate to move higher with rising rate expectations.

Professional investors appear to agree.For instance, one strategist used a large risk reversal to get very bullish exposure to gold.A risk reversal is when the options trader sells a put to finance a call buy (or vice versa).The strategy was executed in SPDR Gold Shares ETF (NYSE: GLD).

This particular trade was for the November 16th options.The trader purchased the 118 calls and simultaneously sold the 116 puts for a total of $0.05 with the ETF trading at $116.82.The purpose of this risk reversal was take a long position in gold without having to spend any upfront capital (or very little – just 5 cents per spread).

The trade was executed 3,500 times and breaks even at $118.05.Above that level, every dollar gold moves higher and the trade makes $350,000 per dollar.On the flip side, below $116 and trades can lose $350,000 per dollar – yes, risk reversals are risky trades.Clearly, the trader believes there’s a floor on gold over the next couple weeks, and I tend to agree. 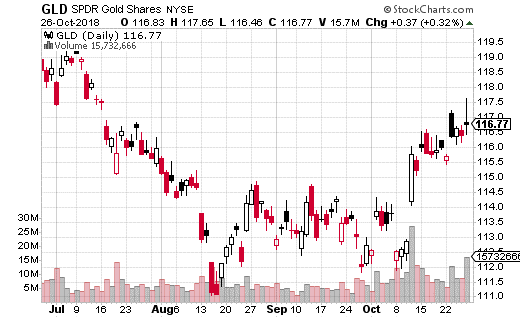 Still, I don’t recommend that kind of risk for most options traders (and whoever holds your brokerage account will hate you if you try to do a trade like that).Instead, you can make a very simple trade in GLD to get long gold.

The November 16th GLD 118 calls only cost $0.90.That’s not a lot to spend for a trade that should protect you against market uncertainty through the next Fed meeting.You can only lose $90 per contract but your upside is unlimited (above $118.90) if gold explodes higher.

This chart could make today the easiest time in history to retire and feel rich while doing it.