Back in April, I shared with you about the growing problem facing humanity in many places around the world – the growing scarcity of water, which is the foundation upon which our very civilization is built.

Conditions are still very bad, making water even more of a no-brainer sector for some of your investment money. Let me fill you in on what has happened since my last article on water.

First, there was new satellite data on freshwater reserves from NASA that revealed dozens of regions across the globe are in danger of becoming the next Cape Town. If you’ll recall, I told you about the South African city of nearly four million residents that was in danger this year of becoming the first of the world’s big cities to run out of water. It had to impose severe water-saving measures to avert “Day Zero”… more on that situation in a moment.

Related: How to Profit from Solving the World’s Water Shortage

Research from scientists at NASA and the Jet Propulsion Laboratory shows that worldwide fresh water reserves have changed drastically since 2002. The decline in water availability in regions such as northern India, north-east China, the Caspian Sea and across the Middle East has been blamed mainly on irrigation and groundwater pumping.

The study was the first to use gravitational satellite data to map global trends in fresh water availability across a 14-year period, drawing on data from NASA’s Grace satellites. The research identified areas where water resources rose or fell significantly during the period, and it found 14 regions where changes were primarily due to human activity, compared with eight regions where the changes were mainly caused by climate. As Jay Famiglietti, one of the study’s authors, noted “Fresh water availability is changing and water insecurity is much closer than we think.”

That means there could a number of Cape Towns in our future.

Speaking of Cape Town, it managed to postpone it so-called ‘Day Zero’… barely. Theewaterskloof, the biggest reservoir for the city, is a vastly diminished trickle of its former self after three years of relentless drought have reduced it to barely a tenth of its 480 billion-liter capacity.

But for now, ‘Day Zero’ has been put off until 2019. The drought is still going, but the people have made unprecedented efforts in conserving water. In three years, Cape Town residents have more than halved their use from 1.2 billion liters a day in 2015, to just over 500 million liters (about 132 million gallons) at the start of this year. Part of the restriction included suburban residents living with just 50 liters (a little over 13 gallons) a day per person versus the global average of 185 liters.

If and when ‘Day Zero’ restrictions kick in, residents’ water rations would be cut to 25 liters a day. This will be triggered when overall dam levels fall to 13.5% – they were 19% recently.

Water is also becoming more important geopolitically. Take a country that has been in the news a lot lately – Turkey.

Turkey is the country where the very important Tigris and Euphrates rivers originate and it decides how much of the water to release to its neighbors to the south – Iraq and Iran. It recently decided to restrict the water flow on the Tigris River as it fills a reservoir behind a newly-built dam. Many of those dams, by the way, flooded the traditional lands of the Kurdish people that President Recep Tayyip Erdoğan is constantly fighting against.

That restriction of the Tigris is not good news for those downstream. In Iraq, for example, inflows this year are 40% below the long-term median.

Water shortages pose an immediate and very real threat to Iran, Turkey’s ancient rival. Kaveh Madani, a former Iranian deputy vice-president for the environment and a professor at Imperial College London, said to the Financial Times: “This is not a water crisis. It is a bankruptcy.”

He was not exaggerating the seriousness of the situation. Drought now afflicts 97% of Iran. The country’s most serious recent protests were not against “moderates” or “conservatives” in the government and the average person there could care less about the U.S. withdrawal from the nuclear deal… they were protesting about the lack of water.

The protests are aimed in the right direction – poor government policy. Iran’s policy to raise national food production has led to the cultivation of marginal farmland and, in turn, over-irrigation, salinification and increased desertification.

As you can see water is becoming more and more crucial and is a must-own investment. So how can you participate in the water investment thesis? 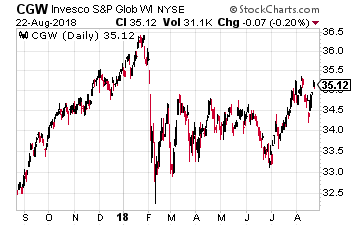 Related: 5 Stocks That Prove Water is a Growth Investment

This is nicely balanced geographically with about 45% in the U.S. and the rest overseas. The top two sub-sectors within the fund are utilities (46%) and industrials (41%). Wall Street is apparently still in the ‘ignorance is bliss’ mode when it comes to the global water situation because this fund gained only 6.7% over the past year and is actually down 1% year-to-date.

Among its top ten positions are names that should be well-known to U.S. investors: American Water Works (NYSE: AWK), Xylem (NYSE: XYL), Idex (NYSE: IEX), Danaher (NYSE: DHR) and Aqua America (NYSE: WTR). Both AWK and WTR are water utilities, while the other three are industrial companies.

Interesting to note that these stocks have actually outperformed the ETF on an individual basis, which is why I almost always opt for individual stocks instead of an index or an ETF. Here are the gains for these stocks on a one-year basis and year-to-date respectively:

One of these stocks is my top water recommendation in my Growth Stock Advisor newsletter – Xylem. It recently came in at number 7 on the Fortune 2018 “Change the World” list for its effect on the world.

The Water Infrastructure segment includes the company’s business surrounding the sourcing, collection, treatment, and transportation of water. The primary customers in this segment are public utilities and large industrial companies. These customers use Xylem products including industrial pumps, filtration and treatment equipment, and infrastructure control systems.

The Applied Water segment involves the Xylem’s products and services sold to residential, commercial, industrial, and agricultural end-users. Some of the products in this segment include pumps, valves, heat exchangers, hydro turbines, and dispensing equipment systems. Its Applied Water business focuses more on the distribution of water to households and businesses.

The third segment of Xylem’s business is Sensus. It represents the company’s largest foray into the smart technology market. Sensus is all about technology and includes a variety of smart meters, cloud-based analytics software, remote monitoring and data management systems, and smart lighting.

The company reported excellent results for the second quarter of 2018. It delivered $1.3 billion in second quarter 2018 revenue, up 13% year-over-year. Revenue for the quarter rose 8% on an organic basis, driven by double-digit growth in utilities and continued strength in the industrial and commercial end markets across nearly all major geographies. Orders increased 8% organically in the quarter. Xylem now forecasts full-year 2018 revenue of approximately $5.2 billion, up more than 10% versus the prior year. On an organic basis, Xylem now anticipates revenue growth in the range of 6% to 7%. Xylem also narrowed the range of its full-year 2018 earnings expectations, with adjusted earnings per share in the range of $2.85 to $2.95. This represents an increase of 19% to 23% from Xylem’s 2017 adjusted results.

Xylem’s stock is up more than 12% since the November 29 recommendation date despite the turbulent stock market we’ve had in 2018. And I expect much more upside in the years ahead due to the water situation globally.