While the Fed has for now put interest rate increases on hold, I continue to receive questions on whether REIT values will be hurt by rising interest rates. It is a widely held –but inaccurate– belief that REIT values must fall if interest rates continue to increase. The fact that many REITs increase their dividends over time tells us that these are businesses with potential for growing dividends and share values even in a rising rate environment.

Recently, I looked at the history of REIT values and interest rates. Since 1995, there has been 16 periods of significantly rising interest rates. Out of those 16, REIT values increased 12, or 75% of the time. In the period from June 2004 through August 2006 the Fed increased rates 16 times. During that period REITs outperformed the S&P 500, 59% to 22%.

The fact is that REIT results are driving more by economic conditions, rising commercial real estate values, and the ability of REITs to increase the rental rates on their properties. We can monitor how well a REIT is performing from its history of dividend growth.

I maintain a database that covers about 140 REITs. I use the database to track dividend rates, yields and increases. Of the 140, about 90 have histories of regular dividend increases.

There are four REITs that should announce a dividend increase in April. 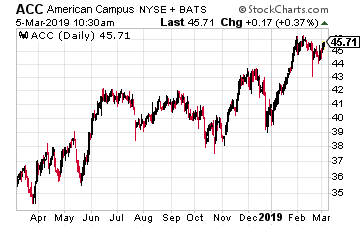 While some growth comes from acquisitions or development, ACC also realizes 2.5% per year of average rental rate growth. Since resuming dividend increases in 2013, the payout has been increased by 5% to 6% for six consecutive years.

The new dividend rate is announced at the end of April/early May with an end of May payment date. 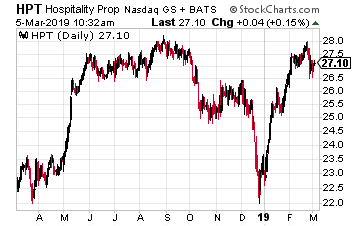 Hospitality Properties Trust (NYSE: HPT) owns 325 hotels and owns or leases 199 travel centers located throughout the United States, Canada and Puerto Rico. All the properties are leased to management operators. In 2018 FFO per share was up 2% compared to the 2017.

The current dividend rate is 57% of 2018’s FFO. For the last several years, HPT has been increasing the dividend by about 2% annually. I expect an increase this year of similar magnitude.

The new dividend rate has been announced in mid-April, with a late April record date and second half of May payment date. 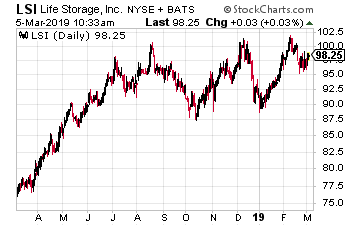 Life Storage Inc. (NYSE: LSI) owns over 750 self-storage facilities located in 28 states and Ontario, Canada. Self-storage has been a cyclical REIT sector and growth has flattened over the last year. Life Storage was growing its dividend by over 10% per year before keep the rate flat for the last two years.

For last year FFO per share increased by 3.7% so investors should look for a low single-digit dividend increase. If a boost is coming in April it will be announced near the start of the month for the dividend to be paid at the end of April. 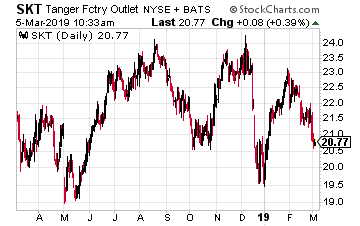 Tanger Factory Outlet Centers Inc. (NYSE: SKT) was the pioneer in developing factory outlet malls. The company has increased its dividend every year since its 1993 IPO. Over the last five years, the payout has grown at a 9/63% annual compounded rate. However, the rate was increased by just 2.2% last year.

In 2018, AFFO per share was up slightly compared to 2017 results. With the turmoil in brick and mortar retail, Tanger has stayed conservative with its balance sheet and growth projects. The current dividend just 58% of AFFO. I expect a 2% to 3% increase to keep the company’s dividend growth track record intact.

The next dividend will be announced in early April with and end of April payment date.

While Republicans and Democrats fight tooth and nail in Washington... 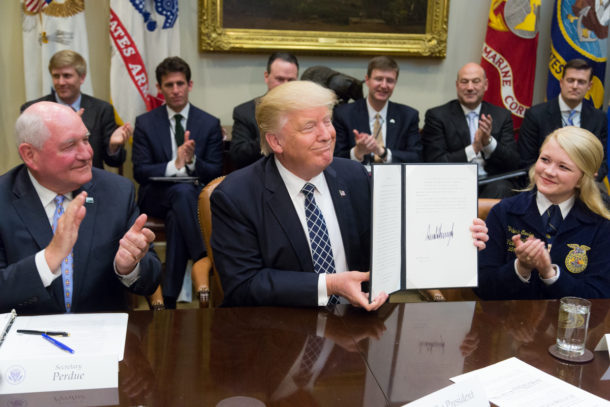 In fact, it's a lucrative market that was once reserved for only the richest Americans.

But, thanks to laws passed by Congress, you and I now have a 'backdoor' investment into this lucrative market.

But you must act fast, the deadline to earn your first payment is coming up quick.