It’s officially the start of a new trading year, but that doesn’t mean you have to create all new investment strategies.  While there are certainly going to be some changes (possibly big ones) in 2018, there is plenty that happened in 2017 which will more or less be repeated this year.

For instance, the leading mega tech companies are probably still going to drive a lot of the market action.  Companies like Apple (NASDAQ: AAPL), Facebook (NASDAQ: FB), and Amazon (NASDAQ: AMZN) are going to continue to be market leaders, at least in terms of volume.

In terms of tech companies (or retail), I don’t really see any new players breaking into the upper echelon of heavily traded securities.  Maybe Tesla (NASDAQ: TSLA)?  Of course, we can always be surprised.  Maybe some blockchain company will rise up out of nowhere and capture investors’ attentions, just like Bitcoin itself has done.

Outside of cryptocurrencies though, it’s probably going to be more of the same in terms of the most heavily followed companies.  That list definitely includes Netflix (NASDAQ: NFLX), which will certainly have its fair share of headlines in the coming year.

One trader doesn’t expect a whole lot from NFLX, at least in the coming weeks.  The trader sold a call and a put, both out-of-the-money and expiring on January 19th.  The strategy is known as selling a strangle and makes money if NFLX stays in between the two short strikes by expiration.

There’s no reason to expect January to be a crazy month, so in my ways, this strategy makes sense.  A roughly $10 range up or down is not bad for a stock like NFLX.  However, the trade gets very risky outside of the profit range. 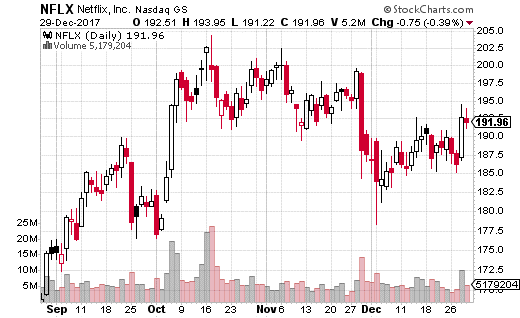 Personally, I never make trades unless they have defined risk.  I want to know what my max loss potential is in any scenario.  With a short strangle, you essentially don’t know how much you could lose on a big move.

Let’s say you like this trade idea in NFLX but prefer to have defined risk.  All you need to do is buy a strangle outside the short strikes.  In other words, buy a farther out-of-the-money call and put than the ones you already sold.

Yes, your gains are smaller by a fair amount… but so is your risk.  This type of trade is called a short iron condor and is a quite popular way to collect premium from selling options while keeping your risk under control.