Is This Trade Predicting A Massive Selloff In Stocks? | Investors Alley

There’s been plenty of action in the market lately, most of it of the negative variety. The S&P 500 is down over 8% over the last three months and has recently gone negative for the year. Other asset classes haven’t necessarily been the answer with gold, oil, and bonds all down for the year as well.

Volatility, as seen by the VIX, has remained elevated for large portions of the year. It’s quite unlike 2017, where the VIX almost didn’t get above 15 and sat closer to 10 for much of the year. Conversely, in 2018, we’ve seen a high over 30 and about half the period so far has been around 20 or above.

You could argue that 2017 was an abnormally low volatility year, which is certainly true. However, 2018 has been more volatile than any year since the aftermath of the Financial Crisis of 2008-2009. In fact, VIX futures have essentially been under pricing volatility in terms of actual, realized volatility. (Keep in mind, the VIX itself is not a tradable index, so futures, options, and ETFs are used to trade it.)

In other words, index options have actually been cheaper than what the actual movement in the index suggests they should be priced at. For the most part, if you’ve been buying puts on major stock indexes, you probably have been doing pretty well.

But what about the Santa Claus rally we tend to see in December? That’s the term for the typical rally we see in stocks around this time each year. Is this bullish event still in the cards?

According to some options traders, it’s not likely. In fact, there’s at least one strategist who is preparing for a worst-case scenario. This trader bought some extreme upside calls in iPath S&P 500 VIX Short-term Futures ETN (NYSE: VXX). 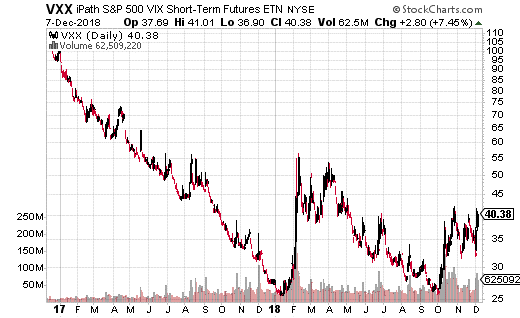 VXX is an ETN which trades like a stock and is easily accessible to the average trader. The fund invests in the front two futures month of the VIX, so it’s a decent reflection of how short-term volatility is behaving. VXX is a heavily traded product and is used for both hedging and speculation on the direction of volatility.

But as you can see in the chart, VXX climbing to $70 is a highly unlikely event. Assuming the VIX futures curve maintains the same shape, volatility would almost have to double for VXX to climb that high. The trade appears to be a catastrophe hedge.

Still, if you want to protect your portfolio from a black swan event, spending $0.06 per option on far out VXX calls is at least a cheap way to do so. On the other hand, you could buy yourself both more time and a closer to the money strike without breaking the bank. The January 18th (monthly expiration) 55 calls in VXX cost about $0.50 for example. You get over a month of protection for a not unreasonable price in that case – and are still very much protected against a severe meltdown in stocks.