Is Oil Going Higher? Feel Like You Missed The Gains? | Investors Alley

How do you analyze oil in this market?  It may seem like picking a direction for crude oil shouldn’t be too overwhelming of a task.  However, under current market conditions, there are multiple competing factors in what could drive the price of oil (higher or lower).  Deciding which way you think the price is going may be more daunting than you think.

First off, the price of oil tends to be directly correlated to how well the global economy is doing.  Under normal circumstances, demand for oil is higher when the economy is firing on all cylinders, so to speak.  However, demand is just one factor.  If oil supply exceeds demand, then it may not really matter how well the economy is performing.

The huge glut of oil from fracking in the US is the primary reason why the price of oil bottomed out over the last few years.  Many of these operations were shut down when oil became too cheap to make the process worthwhile.  If the price of crude climbs higher, these non-standard drilling methods will certainly become popular again.

Perhaps more important in the long-run, alternative forms of transportation fuel are really taking off.  Electric cars are the most obvious example, and as they become cheaper, more and more people will purchase them.  Nevertheless, in the short-term we’re still a long way from electric vehicles taking over for gasoline engines.

On the other hand, Chinese tariffs on US crude oil could certainly have an overall bullish impact on the price of oil. Moreover, a trade war in generally could result in pressure on the US Dollar, which in turn tends to be a bullish variable for crude oil prices.

In sum, we have a growing economy and a potential trade war which are bullish for oil.  On the other hand, we have the possibility of rapidly increasing supply and a global trend shifting away from fossil fuels, which are bearish factors.   So you can see, there’s hardly a consensus opinion on what’s next for oil.

Of course, this is when we take a look at the options market to see what the smart money is doing…

And as a matter of fact, we just had a very bullish trade occur on United States Oil (NYSE: USO), which could give us some directional clues. 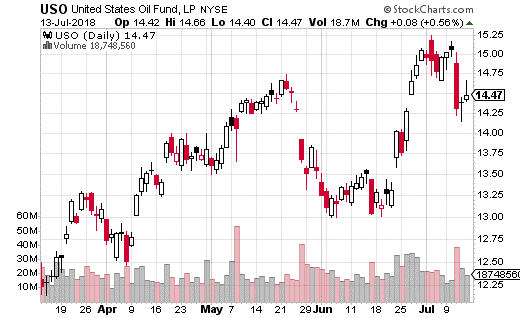 That’s fair amount of cash to drop on a long options trade. It’s especially true because commodity ETFs tend to have consistent downward pressure due to the structure of the futures curve and how ETFs are exposed to them.  In other words, you don’t just drop three quarters of a million dollars on a long oil ETF trade unless you feel pretty confident oil is going higher.

This is easy trade for me to recommend if you are bullish on oil.  For about $0.40 per contract, you get over 2 months of exposure to oil’s upside.  Plus, USO only needs to move about 7% higher for this trade to make money.  Oil can move 7% in a day – so that’s easily within reach and then some.  If you’re bearish instead, the September 14 puts only cost about $0.45 – so it’s roughly the same trade, just with the opposite direction in mind.