How To Generate Income On Tesla’s (TSLA) Plunge | Investors Alley

Of all the selling going on in the stock market these days, no sector has been hit harder than tech. Although I believe the overall selling has been too harsh, the tech sector was certainly overvalued relative to other sectors.

Keep in mind, the tech sector has almost always been the biggest area of growth, so it does make sense to some extent that its companies would have the highest valuations. However, there were certainly some companies whose valuations were very difficult to justify.

Of all the ultra-pricey stocks out there, probably none was frothier than Tesla (NASDAQ: TSLA). Of course, Tesla has been a cult stock for some time, and its CEO Elon Musk could basically do no wrong. By the way, some people call TSLA an automotive stock, others an energy stock, but above all else, it’s a technology company.

Take a look at the chart of TSLA over the last 3 years. You can see the huge jump last year and the big selloff over the past week. 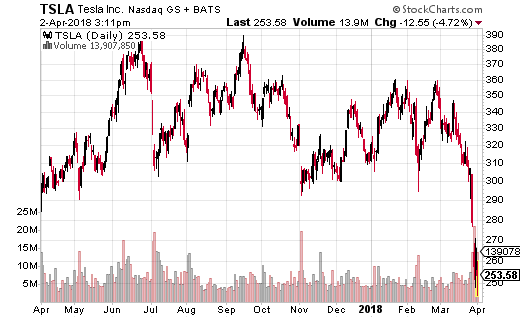 The selloff was sparked by production concerns over the company’s Model 3 automobile. The highly sought-after $35,000 electric vehicle is not being produced as fast as expected. There is real concern that buyers will walk away as they become frustrated with the wait time. TSLA has simply not been able to keep to their ambitious production schedule.

Between the tech selloff, the sky-high valuation, and the production issues, TSLA certainly has plenty of short-term bearish catalysts. Could we see a drop all the way to $200 or below in the next six months? At least one big options trader thinks it may be possible, but also is prepared if the stock goes right back up.

This trader sold a massive September straddle in TSLA at the 265 strike. Selling a straddle is when a trader sells a call and a put at the same strike in the same expiration. It’s a strategy used when the strategist believes a stock is going to be range-bound, or settle at or near a certain price at expiration.

Selling the straddle generated a credit of $78! That means the stock would have to close lower than $187 or higher than $343 at September expiration to lose money. That’s a gigantic range, and any price in between those strikes means the trade is profitable. At max gain of $265 at expiration, the straddle seller – who sold 800 straddles – would make over $6 million.

So is this sort of trade you and I should do? Definitely not. We don’t want that kind of risk, or more importantly, the kind of margin necessary to hold a short straddle in our portfolio. Instead, we can generate decent income by selling put spreads in TSLA.

While TSLA has its share of problems, the company’s products are also extremely popular (and typically high quality). Elon Musk has always been successful at whatever large company he’s been behind (PayPal (NASDAQ: PYPL) Space X, SolarCity). As such, I believe there’s a floor on TSLA’s stock price, at least for the next several months.

The straddle seller is protected down to $187 and until September. Let’s say we wanted to cut some time off that and look at June options. Selling the 180-190 put spread in June (selling the 190 put, buying the 180 put to cap risk) would generate about $1.00 in income.

Now, you’d risk $900 for every $100 you generate with this type of trade, so you would only do this strategy if you feel TSLA isn’t going below $200 or so. Also, if TSLA does continue to drop, you’d want to roll or close your positon pretty quickly. However, if you are believer in TSLA, this is the sort of strategy you could use every 3 months to generate additional income in your portfolio.