How To Bet Big On Banking With Options | Investors Alley

I often make the argument that trading options is superior to trading stocks. Now, I’m not talking about investing in stocks… if your goal is to collect dividends, you obviously need to buy stocks. But when it comes to trading (short to medium-term holding periods) options are almost always the better choice.

Generally, options traders will point to the built-in leverage of using options and the ease of access to underlying assets which would otherwise be difficult to afford. However, I believe the most important benefit to options is their flexibility. Most significantly, being able to tightly define your risk parameters for any given trade is a huge advantage to using options versus stocks.

Because you can you can buy and sell both calls and puts, it opens up a massive variety of options combinations (what we generally refer to as spreads). Throw in combinations of options and stocks (covered calls, delta neutral trading, etc.), and you’ve got nearly unlimited choices.

One type of spread you’ll often see professional traders use is the ratio spread, or the ratio backspread, to be more specific. This type of trade essentially has too much risk involved to be used by most casual traders. A standard backspread consists of buying an option near the money (call or put) and selling two options in the same expiration at a higher (call) or lower (put) strike.

This type of spread is very popular because it greatly reduces the cost of the trade by selling two of the farther away options. On the other hand, the double short strike means there’s unlimited risk if the underlying asset prices moves through the strike. That’s why this is a common trade among pros but generally avoided by the casual options trader.

Nevertheless, you can still glean a lot of information from large block backspreads which hit the tape. (There are also ways to roughly emulate the trade without taking on the same amount of risk.) In fact, a very interesting ratio backspread hit my screener this past week which provides a moderately bullish take on Morgan Stanley (NYSE: MS).

By reducing the spread cost under $1, the trader has pushed the potential return up to $4.03 or 415% gains, with breakeven at $53.47. The spread buyer also is only risking $0.97 if MS stays below the breakeven point. However, there is considerable risk above $57.5… $1.5 million for every dollar the stock moves above that point.

Keep in mind, the trader is spending almost $1.5 million to place the trade (and stands to gain over $6 million if MS closes at $57.5 on October expiration). That’s a lot of money to put down on a three-month trade. As such, there’s clearly a strong opinion – backed by capital – that MS is going higher, but not to the moon, by October. 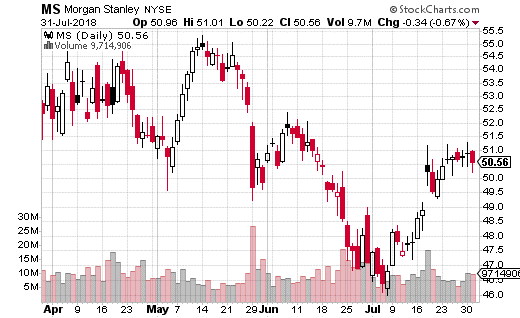 Let’s say you like this trade, but don’t want to expose yourself to the upside risk (or margin requirement). You can simply turn the spread into a standard vertical spread and pay $1.20 instead of $0.97.  It’s a reasonably close price to the backspread detailed above without all the risk.

So why would someone want to save just $0.23 on a spread if it comes with all that additional upside risk? First off, the strategist clearly believes MS isn’t going higher than $57.5 by October. Moreover, he or she could easily hedge the position with shares (or possibly already has done so). Finally, $0.23 doesn’t seem like a lot if you’re doing a 5-lot, but when you’re doing 15,000… well, it makes a big difference ($345,000 to be exact).