Here’s How to Profit When the Dollar Tanks | Investors Alley

With the Fed announcement behind us, it’s time to start thinking about how to trade the expected slow increase in interest rates. The next small rate increase is expected in December, and then there could be two or three more incremental increases in 2019.

Of course, we can’t predict definitively what will happen. A change in the global or domestic economic picture could halt rate increases – or even reverse them in an extreme case. Plus, even slight variations in interest rate expectations could have a major impact on the US dollar. As such, trading the dollar can be a very reasonable way to take a position on interest rates.

So how do you trade the dollar? Once again, ETFs (and their options) offer us an easy and straightforward way to trade assets that used to be considered arcane and mostly untouchable for the average trader.

Invesco DB US Dollar Index Bullish Fund (NYSE: UUP) is a popular way to trade the dollar against a basket of currencies. As the dollar appreciates against six major world currencies (such as the Euro and Yen), UUP goes up, and vice versa.

You may not think there would be a lot of opportunity to trade options in UUP if you look at a chart of the ETF. Clearly, it doesn’t move all that much ($3.50 range in a three-year period). That’s in part due to the nature of currencies (large moves don’t typically happen over a short-period of time). It’s also because when a currency is matched against six other currencies, moves within the individual currency pairs will cancel each other out. 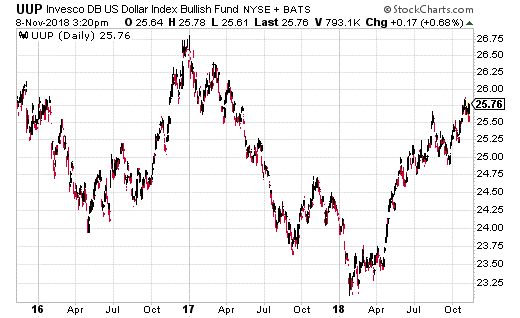 Nevertheless, it didn’t stop a strategist from making a considerable purchase of puts on the ETF.

While UUP doesn’t move a whole lot, the dollar index ETF only needs to drop to $24.84 for the trade to break even. Once again the massive amount of options purchased means this trade could make substantial gains on a drop in the dollar.

Of course, with interest rates moving expected to move higher, it’s more likely that is trade is a hedge against an unlikely scenario. It could be some kind of fund (pension fund, exchange traded fund, mutual fund, hedge fund, etc.) betting on higher interest rates and using this trade as a hedge. It also could be speculative, although when straight puts are purchased like this, it’s generally a hedge.

Regardless, if you have a position that makes money on higher expected interest rates (short bonds, long financials, etc.) this could be a very cheap hedge for you to put on. That is of course assuming you don’t buy 218,000 puts at once.