Getting Paid 5.5% While Waiting for the Energy Rebound | Investors Alley

This year will go down as another strong one for Wall Street. We had a big dip late last year, so that helped give 2019, a nice low base to start with, but outside of that it’s been a nice slow uptrend for stocks this year.

But what’s truly remarkable is that energy stocks haven’t merely lagged the indexes this year, but they’ve lagged the market for several years. From a long-term perspective, the gap is astonishing.

Energy Has Lagged for More than a Decade

Let’s look at the Energy Sector of the S&P 500. This subset of the market includes 29 of the largest energy companies in the world. The popular ETF trades under the symbol XLE.

But that could soon change. Why? Because at the moment, the entire energy sector has been on pins and needles as we await the gigantic IPO of Saudi Aramco. This isn’t just a big initial public offering, but it will be the largest in history, by far.

Saudi Arabia is looking to sell off 1.5% of its state oil company for $25 billion. That works out to a valuation of $1.66 trillion. That would make it larger than Google and Facebook combined.

Aramco has been planning the IPO for some time now. The Kingdom of Saudi Arabia realizes that it needs to diversify its economy. The offering was originally planned to take place last year, but the IPO has been delayed a few times.

In 2016, when Crown Prince Mohammed bin Salman first started talking about an IPO, some analysts thought the company could be valued as high as $2 trillion. Actually, some thought it could go for even more. It’s hard to describe how much money this is. For comparison, buying a giant like Chevron would set you back a cool $220 billion.

The fear over energy stocks at the moment is that the flooding of Aramco shares will hold down energy stocks even more. The price of oil hasn’t moved much since the spring. In fact, it looks like Aramco will look to buoy the price for oil ahead of the IPO. We don’t know the details yet, but Aramco will probably announce the offering price in two weeks, which would be on the same as the OPEC meeting in Vienna.

While there’s potential for a rally in energy shares, I wanted to highlight some tempting dividend yields that you can find in this sector.

Let’s start with Occidental Petroleum (OXY). OxyPete is one of the largest oil and gas companies in the world. The company was founded in 1920 and is based in Houston. OxyPete operates through three segments: Oil and Gas, Chemical, and Midstream and Marketing. The firm is currently valued at $35 billion.

Like many energy stocks, Oxy Pete’s stock has been in a world of pain. Over the last 14 months, the share price has been cut in half. Still, the company remains profitable. The last earnings report came in at 11 cents per share, which is less than one-third what Wall Street had been expecting.

This summer, Oxy Pete’s board approved a one-cent dividend increase. The company now pays out a quarterly dividend of 79 cents per share. That comes to $3.16 per share for the year. At the current price, that works out to a dividend yield of 8.2%. That’s more than four times the yield of a 10-year Treasury.

Exxon Mobil (XOM) is the granddaddy of American oil companies. XOM has operations all over the world. As of December 31, 2018, Exxon Mobil has approximately 25,000 net operated wells with proved reserves of 24.3 billion oil-equivalent barrels.

The oil bust has been hard on Exxon Mobil. In 2012, XOM made over $8 per share. This year, it will probably make about $2.66 per share. Wall Street expects an earnings rebound, and the business outlook will be much brighter after the big Aramco IPO.

Exxon Mobil currently pays a dividend of 87 cents per share. Going by the recent price, that translates to a dividend yield of 5.2%. You can’t find many CDs paying you a rate like that, and certainly not a world-renown blue-chip stock.

Schlumberger (SLB) supplies technology for oil and gas, drilling, and production. This is another energy giant. Schlumberger currently employees more than 100,000 employs across 120 countries.

The company has been through some rough times. A few years ago, the DOJ nailed them for violating sanctions against Iran. Schlumberger had to fork over $230 million in fines. As big as the company is, they had to announce some layoffs a few years ago. The total job loss came to 21,000 jobs or about 15% of the total workforce.

Things seem to be looking better for SLB. For the last earnings report, the company beat expectations by three cents per share. For 2020, Wall Street expects earnings of $1.72 per share, which is a nice increase over the $1.46 per share that Schlumberger will probably make for this year.

Schlumberger has been paying out 50 cents per share in dividends each quarter for the last four years. That gives the stock a nice cushion of yield for 5.5%.

133 million people are cutting the cord, and you can profit from it without Netflix. 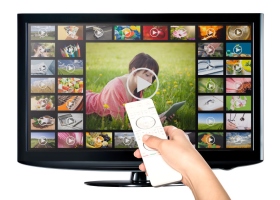 Everyone and their mother is turning to streaming to get their TV fix. Cable companies are going the way of the dinosaur. And there’s one little-known, $10 opportunity that can have you tripling your profits and dividends very quickly.