Even as technology invades other areas of industry, there has been one notable laggard in adopting new technologies – the energy industry. 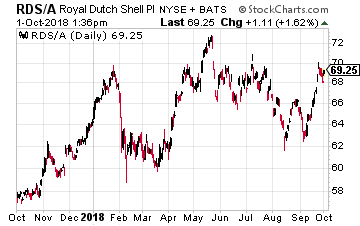 Even the mining industry is using robots to automate many of the functions at mines, but autonomous robots are still a rarity in the oil and gas industry (more on that later). So it is major news that Royal Dutch Shell PLC (NYSE: RDS.A and RDS.B) is investing in an artificial intelligence (AI) platform to support operations across the entire group.

The company providing the AI platform for Shell is C3IOT on Microsoft Azure. The main initial application of AI at Shell will be for predictive maintenance – such as working out when a piece of equipment is likely to fail, so it can be replaced before it breaks. The company says that more than 600,000 assets from individual pieces of equipment to entire wells will be covered by the predictive maintenance program.

The long-term goal though is to expand the AI platform to support other machine learning, machine vision, and natural language processing (NLP)-based uses in all of Shell’s operations – upstream, downstream, unconventional fuels, refining, and retail operations.

Jay Crotts, Shell Group CIO said “With the C3 IoT Platform, we’re looking forward to significantly enhancing the productivity and scope of our advanced analytics capabilities to create greater economic value across Shell’s operations. C3 IoT allows us to optimize our existing investments in data and cloud infrastructure while accelerating time to value of AI-based applications, so Shell can better serve our customers with even more agility and efficiency.”

I cannot emphasize enough that this is a really big deal in the artificial intelligence space. Tom Siebel, C3 IOT’s CEO, described the deal with Shell to the Financial Times as “the largest AI deployment that we’re aware of anywhere in the world.”

And he correctly suggested that the company had jumped ahead of its oil company peers. Siebel said to the Financial Times, “Everybody else is kind of looking at it. These guys are rolling it out.” Siebel predicts that the benefits for Shell will run into the billions of dollars per year!

And with evidence accumulating that the productivity gains from the shale revolution are slowing down, deploying AI could be the way the oil and gas industry takes its next leap forward.

The slowing of productivity gains from the U.S. shale revolution was emphasized recently by the CEO of Schlumberger, Paal Kinsgaard, who said that the advantages of drilling longer laterals and pumping more sand and water to increase oil production was nearing an end. He pointed to the specific example of the Eagle Ford in Texas where unit well performance is declining.

What the IEA Says

The adoption of AI by companies like Shell is just the tip of the proverbial iceberg when it comes to the potential of technology to transform the industry. The International Energy Agency (IEA) recently gave further examples of how how new technologies can boost the oil and gas industry.

One such example is the use of miniaturized sensors and fiber optic sensors that could be used to boost output or increase the overall recovery of oil and gas from a reservoir. Other examples are the use of automated drilling rigs and robots to inspect and repair subsea infrastructure and to monitor transmission pipelines and tanks.

Drones could also be used to inspect pipelines (which are often spread over many miles) and hard-to-reach equipment such as flare stacks and remote, unmanned offshore facilities. Drones with potent “sniffers” can detect methane leaks coming from oil and gas pipelines at 1,000 times the accuracy of traditional methods, saving pipeline owners significant money that is lost from leaked product and potentially from fines.

In the longer term, the IEA says the potential exists to improve the analysis and processing speed of data, such as the large, unstructured datasets generated by seismic studies. The oil and gas industry will furthermore see more wearables, robotics, and the application of AI in their field operations.

The IEA forecast that widespread use of digital technologies could decrease production costs between 10% and 20%, including through advanced processing of seismic data, the use of sensors, and enhanced reservoir modeling. Technically recoverable oil and gas resources could be boosted by around 5% globally, with the greatest gains expected in shale gas. 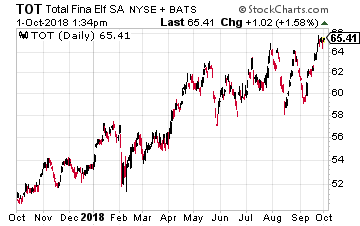 As you saw earlier, Shell is leading the way when it comes to the adoption of AI among the oil majors. Another European oil major, Total SA (NYSE: TOT), is leading in another segment of technology adoption – autonomous robots.

In a first for the oil industry, an autonomous robot will be deployed to an offshore oil and gas platform in the North Sea later this year. Under this pilot project, the robot will initially be deployed at the French oil firm Total’s gas plant on Shetland before being sent to join Total’s 120 workers on the company’s Alwyn platform, 440 kilometers north-east of Aberdeen, Scotland. The machine, made by Austrian firm Taurob and supported on the software side by German university TU Darmstadt, will be used for visual inspections and detecting gas leaks.

The Total trial will start with just this one robot to see how it handles the harsh conditions in the North Sea, as well as how well it works alongside people. If successful, you could see numerous such robots on offshore platforms across the world within five years, transforming the offshore oil industry.

Sell These 21 Stocks About to Be Destroyed by Amazon

These 21 publicly traded companies are right now under tremendous pressure from Amazon’s growth in their sectors. I’m not talking about books and electronics, those were decimated years ago – think Circuit City and Borders – but now companies we wouldn’t have imagined being targeted by Amazon. It’s not just retail but all sectors, from groceries to car parts and shippers to drug stores, healthcare providers, even teachers. No one is safe but these 21 are squarely in Amazon’s sights. And being the big names they are there are probably more than a few lurking in your portfolio.