Dump These Energy Stocks Before the Next Correction | Investors Alley 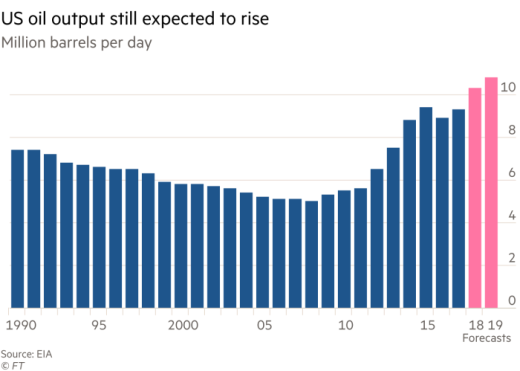 For the prime example of the change in U.S. oil fortunes, look no further than the Permian Basin, which is located in Texas and New Mexico. Output there in 2017 totaled 815 million barrels. The previous record was set in 1973 at 790 million barrels.

All of this is good news, right?

Yes, if you’re an oil consumer. But if you happen to own oil stocks, the answer is a resounding no.

And the reason is obvious. The last time oil prices rose into the $60s per barrel, the U.S. shale producers pumped oil out of the ground as fast as they could. The assumption was that demand from places like China would continue to soar exponentially.

So when demand cooled a bit, the result was a crash that took the oil price into the 20s per barrel, which devastated the industry for several years.

Demand is still strong at the moment. For example, China is the second-largest market for U.S. crude oil, having imported 50 million barrels in the first nine months of 2017. But the oil storage facilities in China are nearing capacity, leaving an open question about the extent of future U.S. oil imports.

And since the recovery rate for oil from shale reserves remains very low, this suggests there is more potential for increased production as the technology to get at these reserves is improved.

Based on the history of absolutely no discipline from the U.S. shale industry, I expect an even greater flood of U.S. crude than the EIA forecast. That flood will likely send oil prices tumbling once again. And it’s not just the smaller shale companies that are solely to blame.

Energy giant ExxonMobil (NYSE: XOM) said in late January that it plans to increase its oil output in the Permian Basin fivefold by 2025 to 500,000 barrels per day. And Exxon is hardly alone among the majors.

Oil companies continue to invest into shale even though most U.S. shale companies have struggled for profitability, and the industry as a whole has consistently lost money since the first successful shale oil wells were drilled in 2008-09. Exxon itself lost $439 million on oil and gas production in the US in the first nine months of 2017.

While all of this is going, the smaller shale companies are also being adversely impacted by the change in the tax laws limiting interest deductibility.

Remember that many of the shale firms have heavy debt loads and now they will not be able to deduct all of their interest payments on that debt. According to Greensill Capital, if the limits on deductions in the 2018 to 2021 period had applied in 2016, companies would have been unable to claim tax relief on 39 % of their interest payments. The limit for 2022 onwards would have prevented relief on 97 % of those payments.

Consider too how quickly too oil dropped below $60 per barrel during just a few days of market turmoil, suffering its worst week in two years. That shows you will see how little firm support there is at the current price level. The steep price decline was likely the result of hedge fund liquidations – hedge funds had accumulated a record long position in crude oil.

Add this all up and I would avoid, or sell short if have a high risk tolerance, the oil producing sector as a whole.

With the added consequences of the new tax law, I would definitely avoid the exploration and development companies that are carrying heavy debt loads. Two ETFs that have large exposure to these type of companies are the SPDR S&P Oil & Gas Exploration & Production ETF (NYSE: XOP) and the iShares U.S. Oil & Gas Exploration & Production ETF (NYSE: IEO). These two ETFs are down 12.88% and 9.05% respectively year-to-date. The former is off nearly 20% over the past year.

Even the Energy Select Sector SPDR Fund (NYSE: XLE), whose largest positions are Exxon (22.6%) and Chevron (17%), is actually a little in value over the past year. In other words, your money will be treated better elsewhere; especially in the light of these companies going in so heavily into shale and ramping up output that will very likely not be needed.

However, if you still wish to have some exposure to the oil sector, I would go with the Norwegian oil company Statoil ASA (NYSE: STO) whose stock is up 21% over the past 52 weeks. The company reported better-than-expected earnings in its latest quarter on the back of record production. 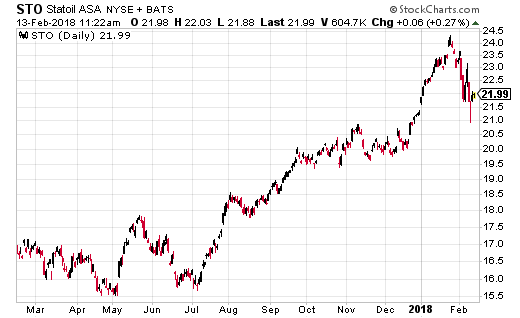 It also, in December, gave the go-ahead to its flagship Johan Castberg project in the Barents Sea after slashing costs by 50%. The breakeven for the project is now less than $35 per barrel. The Barents Sea is thought to hold about half of Norway’s undiscovered oil and gas. The company’s management also showed their savvy when they bought mature oil assets offshore Brazil for the equivalent of $10 per barrel in December.

Now don’t get me wrong. If oil falls in price, so will Statoil’s stock. But I like a management that is focused on squeezing costs and only going ahead with the most profitable long-term projects.

That is unlike some U.S. company managements that only know the words, “Drill, baby, drill!” No doubt due to the fact that some incentive packages for executives are still based on the amount of oil produced and not on bottom line profitability.