Despite Strong Forecasts and The Bitcoin Craze, Here’s Why You Should Avoid This Popular Chip Stock | Investors Alley
Reading Time: 2 minutes 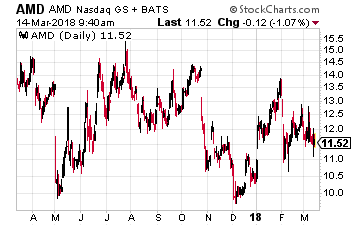 On the face of it, semiconductor firm Advanced Micro Devices (Nasdaq: AMD) is a company on the move.

Revenue and earnings are projected to shoot up by 18% and 124% this year, respectively.

Much of the growth is because AMD has stepped up its game in the CPU and GPU business.

Specifically, its lower-priced Ryzen CPU performed well against Intel’s CPUs. And its GPUs match up favorably against NVIDIA’s similar offerings.

Two Words No Chipmaker Ever Wants to Hear: “Security Flaws”

According to the report, the weaknesses make the chips susceptible to a cyber-attack that could give hackers access to personal information on the respective computers or servers.

Obviously, no chipmaker needs potential security flaws to be exposed. But the timing is particularly unfortunate for AMD, since its chips were just starting to gain some traction against industry behemoths like Intel and NVIDIA. (For comparison, AMD’s market cap is $11.5 billion, versus $244.7 billion for Intel and $151.7 billion for NVIDIA).

It’s also not good news, given that both Intel and NVIDIA are set to release new CPU and GPU chips later this year.

Investment-wise, although AMD’s share price has rocketed over the past two years, it’s down 16.6% in the past 12 months, despite enjoying an impressive year in terms of revenue and profit. And the overall net profit margin remains razor-thin.

In addition, AMD’s price is significantly more expensive than its industry peers, with an uncomfortably high debt load, to boot.

While revenue and profit forecasts are strong for this year, AMD faces challenges from bigger, more diversified, more profitable rivals and needs to get back to showing that it can translate any success into share price gains.

If you’re looking for chipmakers without security concerns and stock prices on the rise then take a look at Tony Daltorio’s Growth Stock Advisor. He’s put a fast moving chipmaker in his portfolio and even with February’s market turmoil it’s churning out double digit returns for his readers.