Now that the bloom is off the cryptocurrency rose, investors looking for the latest hot sector have descended upon the pot stock space. Marijuana-related companies look likely to have raised $8 billion from investors in 2018.

And that’s understandable – estimates are that it could be a $150 billion sector within a decade. The growth in the marijuana sector has been greatly aided by recent developments – the legalization of pot by Canada in mid-October and the Democrats winning control of the U.S. House of Representatives. The latter makes it more likely the U.S. will legalize cannabis nationally. Already, a number of states have legalized marijuana, with Michigan being the latest.

From just a $5 billion market in 2015, the legal cannabis industry in North America is expected, in the most conservative estimates, to top $20 billion by 2020. North America is pretty much the global legal pot market at the moment since about 90% of global legal revenues currently come from the U.S. and Canada.

Cannabis sales are only a small fraction of alcohol sales, but that is likely to change when major beverage companies enter the market and start replacing alcohol content with cannabis content. 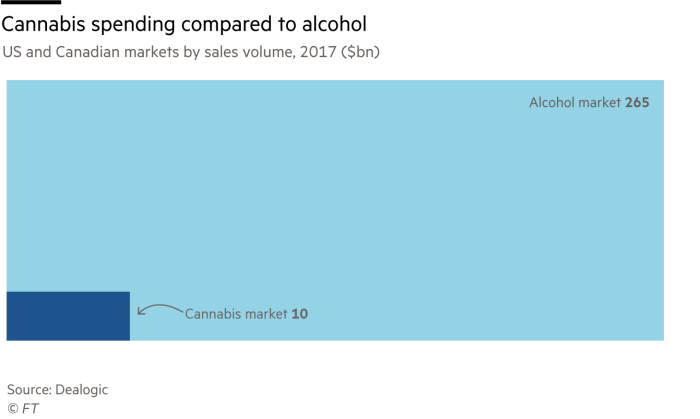 And there is a similar story that looks to be unfolding in the non-alcoholic beverage market also. That growth story is why some of the world’s leading beverage companies have shown interest in the sector.

Some drinks companies are seriously looking at adding CBD (cannabidiol) – the non-psychoactive part of marijuana – into drinks aimed at the mass market. These drinks containing cannabidiol and focused on pain management could become big business. Analysts at Cannacord Genuity estimate that sales of drinks infused with CBD could make up 20% of the edibles market and will reach $600 million in sales in the U.S. by 2022.

Or as a recent Bloomberg article put it, pot has “moved from the black market to the stock market and now appears to be on its way to the supermarket.”

Related: Buy These 3 Stocks to Profit From Marijuana Legalization

Other drinks companies in the alcoholic beverages space have or are contemplating jumping into the pot sector.

And Diageo (NYSE: DE), the drinks conglomerate behind Johnny Walker whiskey and Guinness beer, has also been exploring investment opportunities in the cannabis sector in recent months. It is thought that Diageo, the world’s biggest alcohol company, has had serious discussions with at least three major Canadian marijuana companies. 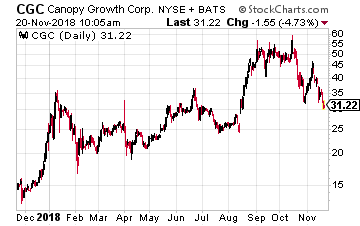 The maker of Corona beer and Modelo Especial, Constellation Brands (NYSE: STZ) has taken a giant leap into the sector when it invested just under $4 billion into the Canadian cannabis group Canopy Growth (NYSE: CGC), lifting its stake to 38%. Underlining the company’s bullish projections for cannabis, Constellation CEO Rob Sands acknowledged that the industry could represent “one of the most significant global growth opportunities for the next decade”.

However, you must still tread carefully when it comes to investing in the cannabis sector. After all, these companies are still money losers. 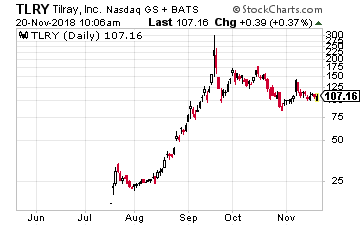 In other words, these companies have costs that are rising faster than revenue. While some marijuana companies are starting to see the size of their losses slow, not one is profitable, and it could still take some time before they start making money. 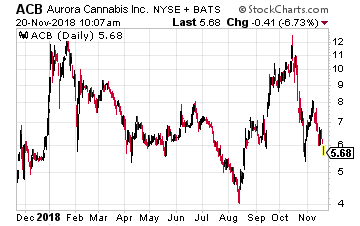 Another worrisome item is the fact that the cost-per-gram is falling in Ontario (Canada’s most populous province) as the provincial government is buying product in bulk and at their set prices. (Canada’s cannabis companies can’t sell directly to retailers.) Tilray’s average per-gram price fell to $6.21 from $7.53.

It will still be months too before Canada’s pot companies produce enough to meet the strong demand. Until then, they’ll be spending big money on developing larger greenhouses. For instance, in August, Aurora announced it was starting production on a 1.2 million-square-foot facility, which will take months to build. 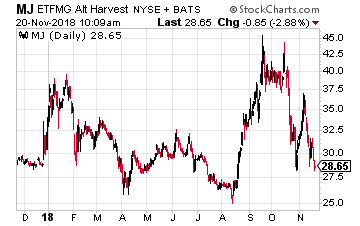 These problems are why I do not like a broad play on the industry such as you would get through the ETFMG Alternative Harvest ETF (NYSE: MJ). Instead, I prefer to look for individual opportunities.

One company that is definitely on my list is CannTrust Holdings (OTC: CNTTF), which will be listing soon on the NYSE. It is in active discussions with a number of firms in the beverage, food and cosmetics industries and expects to announce a deal within the next two months. 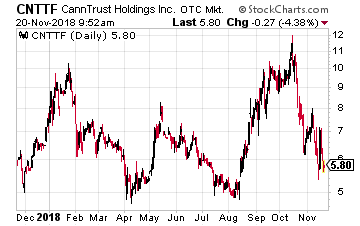 This strategy is in contrast to that of Canopy Growth, which is tying itself to Constellation Brands. The chairman of CannTrust, Eric Paul, told Bloomberg “Ideally, it would be great to have a bunch of brand partners. We’d like to find the best partner for every one of those verticals [beverages, food, etc.]”

I was impressed too with its third results. Here are some of the highlights:

And despite a 20% move up after the earnings announcement, CannTrust stock sells at a much cheaper valuation than its peers.

There is also another cannabis-related company I like a lot that I have recommended to my Growth Stock Confidential subscribers. It is a more conservative way to approach the sector through a REIT that pays regular dividends.

Stay tuned for more on the sector in upcoming articles and special reports.