I’m a great believer in looking at areas that few on Wall Street do for growth opportunities. I like to find a major positive change happening in the global macroeconomic environment that will benefit a sector or industry and then uncover a company that should benefit from this change in the long term.

I’ve recently discovered such a change and want to bring it to your attention… the growing worldwide airplane pilot shortage.

The Boeing and the ICAO Studies

Last summer, Boeing (NYSE: BA) released a study that estimated the world’s airlines will need about 637,000 new pilots over the next two decades to meet demand. That works out to be 87 new pilots entering the commercial ranks every day for the next 20 years!

About 40% of that number will be needed just to replace the pilots globally who will be retiring over the next 20 years. This is a similar problem that I described in the May issue of Growth Stock Advisor with regard to U.S. healthcare staffing as the baby boom generation retires.

The remaining 60% will be needed to cover all the additional flying that airlines are expected to do over the next 20 years, especially in the ultra-fast-growing Asian air markets. That’s one of those positive macroeconomic trends I mentioned earlier – rising incomes in places like China and India are leading to an unprecedented tourist boom emanating from Asia. More on that later.

But even here in the slower growing U.S. market, more pilots will be desperately needed. Boeing said the U.S. market will need about 117,000 new pilots over the next two decades. That’s roughly 5,800 pilots a year or, over three years, it’s the equivalent of the current number of pilots that American Airlines has.

Think about that for a second: imagine if a major airline, like American Airlines, had to replace every pilot every year for the next 20 years. That’s where we are right now and where one of my newest finds fills that niche.

A similar study was conducted by the International Civil Aviation Organization. Its study found that the global airline industry will need 980,000 pilots in 2030, more than double the level of 2010. That will require the training of 50,000 pilots annually.

Bottom line – a lot more pilots will be needed globally. But why aren’t more people pursuing an aviation career?

In simple terms, it isn’t easy to become a pilot.

Even ignoring the physical requirements, it’s darn expensive to become a pilot. Here in the U.S., it costs about $125,000 (on top of whatever you spend for a four-year college degree which is usually required) to get the necessary ground and flight training you need. And thanks to a Congressional mandate, you need to have at least 1,500 flight hours before any passenger airline will hire you.

A Leading Trainer for Professional Pilots 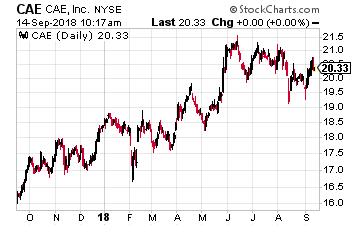 CAE (NYSE: CAE) has been in business since 1947 and offers you a “pure play” training company driven by the long-term growth in civil aviation around the world. That is in contrast to some of its competitors such as L3 Technologies (NYSE: LLL), which are involved in other businesses. The company also is riding the wave of simulation-based training in areas with critical tasks including defense and security as well as healthcare. 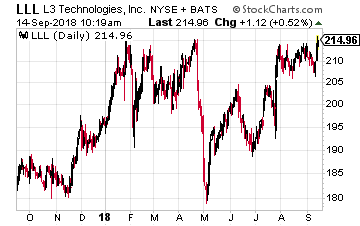 CAE has the broadest global presence in the industry, with over 160 sites and training locations in over 35 countries that includes the world’s largest civil aviation network with over 50 training locations, more than 250 full flight simulators, over 2000 instructors and more than 160 aircraft. Each year, CAE trains more than 120,000 civil and defense crew members and thousands of healthcare professionals worldwide. 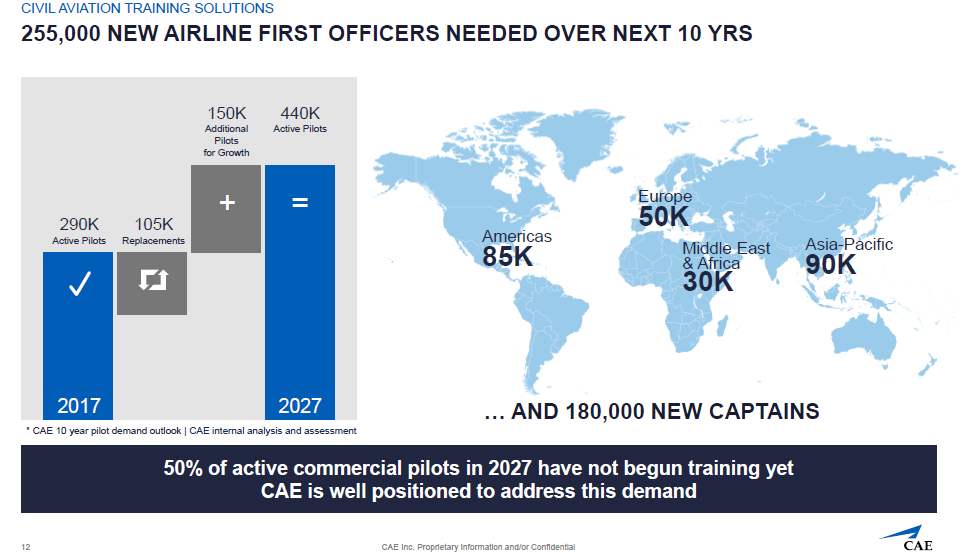 One reason I like CAE is that the company is the leader in these markets, but still with lots of room for growth thanks to the significant, untapped market opportunities that exist in its three core businesses.

While CAE is a market leader in civil aviation training, it addresses less than a third of what the company estimates to be a $3.5 billion training market. Company management is well aware of the incredible growth opportunities here. It says that 50% of the commercial pilots that will be active in 2027 have not begun training yet. CAE predicts there will be a need for 180,000 new captains and 250,000 new first officers over the next decade.

In defense and security, CAE has a 7% share of the approximately $15 billion training systems integrator (TSI) market. In addition to contracts with all the U.S. military branches, CAE also trains people for the U.K. and Swedish militaries as well as NATO.

In healthcare, it is an innovation leader in the simulation-based healthcare education and training market. The company sees significant opportunities for long-term growth as the healthcare market increasingly adopts simulation as a means of training. CAE Healthcare was the first company to bring a commercial Microsoft HoloLens mixed-reality application to the medical simulation market. 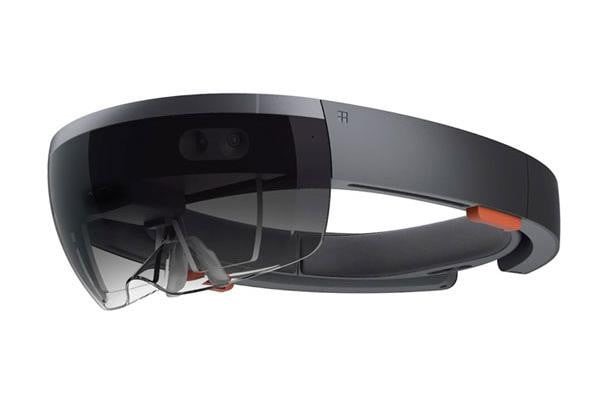 By using the HoloLens, the CAE Vimedix AR ultrasound simulator integrates real-time interactive holograms of the human anatomy. If you think back to last month’s issue and the critical need for more healthcare personnel, you realize how much this type of training is needed.

Another reason I like CAE is that much of its revenues are recurring due to long-term agreements with many airlines as well as military services. In 2017, 60% of its revenues were recurring, up from 43% in 2008 and just 15% in 2001.

In addition, of its $2.7 billion in 2017 revenue, 58% came from civil aviation training solutions and 38% from defense and security training programs. The remainder came from its small, but rapidly growing, healthcare business.

CAE’s revenue base has what I like too – a broad geographic mix with 36% of 2017 revenue coming from the U.S., 28% from Europe and the remaining 36% from the rest of the world. It is the latter area that is growing the quickest thanks to the aforementioned rapid growth in Asian airline travel.

The macrotrends I have been telling you about are already coming together to boost CAE. The evidence can be seen in its latest fourth quarter and full fiscal year results, which sent the stock up 5% immediately afterwards. Let me fill you in on some the details…

I especially like his last statement saying that CAE would exceed the underlying rate of growth in markets that are experiencing accelerating rates of growth themselves. But keep in mind CAE is a company with solid fundamentals behind it and not some company that adds blockchain to its name, sending the stock soaring.