One of the best investing maxims ever from legendary investor Sir John Templeton is this: “People are always asking me where the outlook is good, but that’s the wrong question. The right question is: Where is the outlook most miserable?” Templeton would often also say, “invest at the point of maximum pessimism.”

Adding insult to injury, Vanguard will soon rename the largest gold-oriented U.S. mutual fund and shift its focus away from the metal. The $1.8 billion Vanguard Precious Metals & Mining fund (VGPMX) will be known as the Vanguard Global Capital Cycles fund. Its precious-metal mining exposure would be reduced in favor of other commodity-related industries and global infrastructure, such as telecoms.

That alone, from a contrarian viewpoint, tells me the bottom for gold is nearly here. Vanguard’s move in 2001 to take the “gold” out of the fund name and broaden its mandate perfectly coincided with a bottom for gold at about $255 an ounce.

And there is more evidence, from a contrarian stance, that the peak in negative sentiment for gold is here. Hedge funds have just recently made one of their largest ever bearish wager on gold, raising their net short position in gold futures and options to the largest level since 2006.

The timing was ‘perfect’. Remember what I’ve told you numerous times about crowded trades, with everyone on the same side of the ‘boat’? Very shortly after the hedge funds had initiated those short positions, gold went on a tear as the stock market slumped, enjoying the biggest one day jump in nearly two years.

However, gold isn’t just a contrarian play. It actually does have some solid fundamentals supporting it.

Number one – gold mine production has likely peaked.

After rising every year since 2008 global gold supply plateaued last year, according to the World Gold Council (WGC). Global gold production rose to 3,268.7 metric tons in 2017 from 3,263 tons a year earlier, according to the WGC. That was the smallest increase since 2008, when gold mined fell more than 2% in the midst of the financial crisis.

In China, the world’s biggest producer, gold production fell by a record 9%. That was only the second time output has fallen in the country since 1980. The decline is due to the government clampdown on small, illegal mines. China accounts for about 15% of the world’s gold production, a higher percentage than Saudi Arabia accounts for in the oil market.

Related: Sell the World’s Biggest Gold Miner as it Slips to No. 2

The reason for “peak gold” is pretty straightforward and explained by Barrick Gold president Kevin Dushnisky who says the gold mining industry is suffering from a lack of new discoveries and falling ore grades as well as delays in project development.
Central Bank Buying Frenzy

On the demand side of the supply/demand equation, while investor interest has tailed off, the true ‘smart money’ – central banks have been buying a lot of gold at these depressed prices.

Central banks have emerged as major buyers of gold this year, with purchases hitting their highest level in six years, according to analysts at Macquarie. Central banks have bought a total of 264 metric tons of gold this year, “by far the most at this stage of the year of any period in the last six years,” the bank said. While gold buying has been dominated by Russia, Turkey and Kazakhstan, Poland also bought gold for the first time since 1998, Macquarie said. And Hungary has increased its holdings tenfold to 31.5 tons.

This is just another chapter in the decade-long story of central banks diversifying away from the U.S. dollar. They have been doing so ever since the financial crisis in 2008 because of worries over the ballooning U.S. government budget deficit.

Even billionaire hedge fund manager Ray Dalio, who predicted recently that the U.S. economy is about two years from a downturn, says the dollar will plunge and gold rise as the government prints money to fund a swelling deficit.

“Gold is the anti-dollar,” said Pierre Lassonde, the chairman and a co-founder of Franco-Nevada (FNV), the mining royalty company. “When the dollar is strong, there is no need for gold. But when the dollar is weak, people go back to gold.” Historically, gold and the dollar have a negative correlation of 80% to 85%.

As pointed out in a recent Barron’s article, there are several reasons all long-term investors should hold a portion of their assets in gold.

First, gold has a history of retaining its value. Gold was $20.67 an ounce 100 years ago and that bought a good men’s suit. At $1,200 an ounce, the same is true today. That’s why people throughout the ages have seen gold as a way to pass on and preserve their wealth from one generation to the next.

And just ask people in places like Venezuela where the economy has collapsed as to how gold preserved their wealth. That’s why, when I was an advisor, I would tell clients to consider gold as financial insurance and in the same category as insurance for your health, home and car.

Second, gold is dirt-cheap right now versus stocks. If you measure gold against the Dow Jones Industrial Average, it now takes 22 ounces of gold to buy one unit of the Dow, which is trading near record highs.

The most recent low in that relationship occurred in 2011, when the Dow/gold ratio dropped to 7.8. Then, gold was near its all-time high of $1,900 an ounce. The century-old peak of 40 occurred in 1999, when gold traded at about $290 an ounce and the Dow stood around 11,500. The all-time low came at the top of the commodity boom in 1980, when the metal and the Dow were at parity around 800 after a decade-long stretch when the Dow was mired in a bear market and moved little.

How to Buy Gold 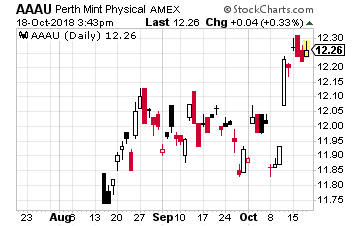 If you’re interested in owning gold, my favorite way to do so is through the Perth Mint Physical Gold ETF (NYSE: AAAU). I own it and here’s why…

AAAU shares are backed by allocated gold secured within The Perth Mint’s network of central bank grade vaults in Western Australia. All the gold held on behalf of AAAU is guaranteed by the Government of Western Australia.

That’s because the Perth Mint is 100% owned by the Government of Western Australia and operates under an explicit government guarantee contained in the Gold Corporation Act of 1987. This covers the offerings and obligations of the Mint including the gold stored on behalf of investors in AAAU.

The Perth Mint is a favorite of people who want to own physical gold. It has been around since 1899 and it operates one of the largest refineries in the world. It is also one of the few firms globally that is fully accredited by the five major gold exchanges: London (LBMA), New York (COMEX), Shanghai (SGE), Tokyo (TOCOM) and Dubai (DMCC).

The beauty of this ETF though is that it allows AAAU shareholders to convert their shares directly into a wide range of gold bullion bars and coins from the Perth Mint at any time! It does this and still has a minuscule annual management fee of only 0.18%.

If you invest into AAAU and wonder how much of a gold product from the Perth Mint you can convert your holdings into, here is a link to their calculation page: https://www.aaauetf.com/calculator.