Opportunities to grow your wealth do not always occur in the technology sector, although it seems that way at times. Sometimes it is the most common and mundane parts of your life that will present a fabulous way to grow the value of your portfolio.

One such example is something you and I take for granted every day here in the United States… water. You just turn on the tap and it’s there. But that’s not true elsewhere in the world and may not be true even here in the U.S. in the future.

I’m reminded of one of my favorite classic poems (published in 1798) – the Rime of the Ancient Mariner by the English poet Samuel Taylor Coleridge. The best-known verse from the poem is: “Water, water, everywhere, Nor any drop to drink.”

Water is seemingly everywhere, covering about 70% of our planet. Yet, fresh water is extremely scarce – accounting for a mere 3% of the world’s supply. Of that amount, the vast majority is either locked up in glaciers or resides in inaccessible subterranean pockets.

Of the amount of fresh water that is available, roughly 70% goes to agriculture to feed the world’s population. The enormous amount of water needed to grow the crops and livestock needed to feed and clothe the world’s growing population is creating a dire global situation.

According to the United Nations, more than 1.6 billion people are currently living in places where sustainable water use has already reached its limits. The U.N. believes that, by 2025, two-thirds of the world’s population will live in water-stressed regions.

Related: How to Profit from Solving the World’s Water Shortage

The World Economic Forum labeled the scarcity of fresh water as the most serious problem globally at the moment in terms of economic, security and environmental risks. And the U.S. Office of the Director of National Intelligence now ranks water scarcity as a major threat to national security alongside terrorism.

And it looks set to get even worse…

Global water consumption is forecast to rise by 85% by 2035, according to a forecast by the International Energy Agency. This could translate to 40% of the world population living with water scarcity by 2035.

Another forecast, from the International Food Policy Research Institute, predicts a 40% gap between water demand and water supplies over the next 15 years.

Let me give you some insight into the severity of the problem currently. In human terms, severe water stress currently affects approximately three billion people worldwide. Consider these very distressing facts courtesy of The Water Project.org regarding water and health:

In April 2017, the World Health Organization (WHO) came out with a startling report. The WHO Director, Dr. Maria Neira, was very blunt about the findings: “Today, almost two billion people use a source of drinking water contaminated with feces, putting them at risk of cholera, dysentery, typhoid and polio.”

She went on, “Contaminated drinking is estimated to cause more than 500,000 diarrheal deaths each year and is a major factor in several neglected tropical diseases including intestinal worms, schistosomiasis (parasitic worms that can attack body organs) and trachoma (bacterial infection of the eye).”

Here is just one such example… residents can’t afford wastewater sanitation facilities, so they just let the sewage flow freely into their backyards from their mobile homes. Human waste lies uncovered in soil, with children playing nearby.

The country in question here? Sadly, it is the United States. These conditions do exist in very rural sections of five southern Gulf states like Alabama, affecting more than 12 million Americans.

One example is occurring in Lowndes County, Alabama, where some people were infected with helminths. These are intestinal worms such as hookworm. Other tropical diseases can be found in this afflicted Gulf Coast region of the U.S. One of these is the infectious disease called chigas, which is spread by triatomine beetles (also known as “kissing bugs”). This disease mimics many of the symptoms of coronary heart diseases, so it often goes undiagnosed.

These numbers are eye-opening and show the importance of water to our health and well-being and our very existence.

Famed international and commodities investor Jim Rogers said in an interview with marketing agency Sinclair & Co., “Water is the single most important determination of civilization.” And he’s right. History shows that without water, no civilization – no matter how advanced – can survive for long.

Water’s importance hasn’t been lost on those that would take advantage of the situation either. The mainstream media has missed the fact that we may have already seen our first ‘water war’. It was conducted in the Middle East by ISIS.

At the height of its power, it controlled large swaths of land around water sources, such as the upper areas of the Tigris and Euphrates Rivers. The Arab region contains less than 7% of the world’s water reserves and less than 1% of the flowing water. Rain there does not exceed 2% of the global average.

And in India in 2016, members of the Jat caste sabotaged a canal that brings precious water to Delhi. The city is one of the world’s largest extended urban areas. The sabotage did not end until the caste got what they wanted from the Indian politicians.

Access to fresh, clean water is now a major investment opportunity of the 21st century. Water is currently a $600 billion market that is poised to grow to $1 trillion in a few short years — by 2020. It’s easy to see why…

Companies worldwide are well aware of the problem they and the planet are facing. To that end, companies are investing in water-related projects at record levels. In 2016, companies invested $23.4 billion in projects to secure their water supplies, according to the environmental impact charity CDP.

The list of companies is like a who’s who of the corporate world and include the likes of Nestle’s, Danone, Kimberley Clark and Colgate-Palmolive. These firms seem to taking to heart a quote from Benjamin Franklin: “When the well is dry, we know the worth of water.” Thankfully, they are acting before the ‘well’ is actually dry.

That $23.4 billion is just the tip of the iceberg. According to the consultancy McKinsey, between now and 2030, there will need to be $7.5 trillion worth of investments needed in the sector to keep pace with the projected increased demand for fresh water.

The problem isn’t just a water scarcity problem, but also an infrastructure problem. Globally, the problem is massive, with the World Bank estimating infrastructure spending needs to triple to $114 billion annually. And that is not counting the operating and maintenance costs.

This is not surprising when you consider that some water systems are more like sieves. Estimates are that leaky water pipes cost America about one trillion gallons of water annually.

The ASCE estimates our country needs $105 billion in wastewater funding now. The EPA says $271 billion will be needed over the next 25 years on wastewater spending. On the drinking water side, the American Water Works Association believes upgrades to our country’s creaking water infrastructure may require an astonishing one trillion dollars!

Overall, the ASCE says there is a more than $2 trillion funding gap between the projected current funding and the $4.59 trillion needed to get U.S. infrastructure up to an overall B grade by 2025. 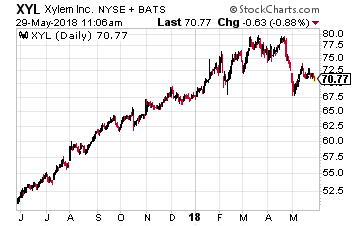 That is music to the ears of our selection for investing in water – Xylem (NYSE: XYL).

This water technology company was spun off from ITT Corporation in 2011 and included all of ITT’s water businesses. Its corporate mantra is “Let’s Solve Water” and does so through the creation of innovative solutions using ‘smart’ technology.

Xylem’s reach is truly global, generating revenues ($4.5 billion in 2016) in over 150 countries. The U.S. accounted for 46% of revenues, Western Europe for another 27% of revenues, the fast-growing emerging market segment now accounts for 20% of revenues and the rest of the world filled in the remaining 7%. In China, the company experienced a 19% rise in orders last year.

The company garners its business from several sources. Here is the breakdown of where the revenues came from in the 2016 fiscal year: public utilities – 47%, industrial firms – 37%, commercial buildings – 11%, residential buildings – 5%.

The Water Infrastructure segment includes the company’s business surrounding the sourcing, collection, treatment, and transportation of water. The primary customers in this segment are public utilities and large industrial companies. These customers use Xylem products including industrial pumps, filtration and treatment equipment, and infrastructure control systems.

This part of Xylem does a lot business in developing countries. Here are just two examples:

Xylem also provides membrane-based desalination technology and components and has done so since 1975. And for more than 24 years, the company has provided pre-treatment systems to improve the performance of reverse-osmosis membranes.

The Applied Water segment involves the Xylem’s products and services sold to residential, commercial, industrial, and agricultural end-users. Some of the products in this segment include pumps, valves, heat exchangers, hydro turbines, and dispensing equipment systems. Its Applied Water business focuses more on the distribution of water to households and businesses.

The third segment of Xylem’s business is Sensus. It represents the company’s largest foray into the smart technology market. Sensus is all about technology and includes a variety of smart meters, cloud-based analytics software, remote monitoring and data management systems, and smart lighting.

Tucked into this business is another 2016 acquisition – the Singapore-based water analytics company Visenti. This firm provides a suite of advanced products and services to enable smart management of water networks.

The logic of the Sensus and Visenti acquisitions is impeccable. Xylem’s smart platform can quickly identify the leaks in a water utility’s creaking water system. Then Xylem can offer its services (pipe fusion, etc.) to fix whatever the problem is.

Xylem: a Look Ahead

In the third quarter of 2017, organic top-line performance improved 5% year-over-year. This was largely driven by very robust demand from public utilities as well as stronger industrial end-market demand; although residential and commercial end-markets also did well.

I expect this number to improve further as the company’s analytics and Sensus business really get rolling. The company itself anticipates organic revenue growth of around 5% by 2020 based on the benefits of the Sensus and Visenti purchases.

Xylem should generate revenues of $4.7 billion for all of 2017. That will be year-over-year upside of about 25%, thanks to the acquisitions. Earnings per share should be around $2.40 a share.

With all the world’s water problems, I see an extended period of robust growth for Xylem, which is so uniquely positioned to meet many of the world’s water woes. Therefore, I recommend you purchase Xylem at a price up to $75 a share.