August – a month with many market participants on vacation – is well known for its bouts of volatility and markets in a tizzy about things not so important.

This year is holding to form with a selloff triggered by worries that turmoil in Turkey – mainly caused by a steep fall in its currency – will spill over into more important emerging markets and then eventually developed markets.

But as usual with August angst, it is much ado about nothing and it merely offers you an opportunity to pick up stocks on sale in some of the better emerging markets. More on that later. First, I want to give you a quick look at Turkey.

The crisis in Turkish markets was triggered by the geopolitical standoff between the U.S. and Turkey, or more specifically, its leader – President Recip Tayyip Erdogan.

A leader I might add that believes he knows better than the markets and has taken full control of the economy. Turkey needs much higher interest rates and tough austerity measures, but he will not hear of that. So he leads his country down the path of Venezuela toward economic oblivion.

Even with that said, the contagion effects emanating from Turkey are very limited. The sell-off we’ve seen in most other emerging markets is not justified by the fundamentals. First, Turkey is not a significant player in the global economy. Last year its GDP was $900 billion, or about 1% of global GDP at market exchange rates. And when it comes to foreign exposure to Turkish assets, the impact is equally limited. Non-residents hold 20% of Turkey’s equity market, which has a market capitalization less than 2% the size of the U.K. stock market. In terms of debt, foreigners hold about 40% of Turkish government bonds – and Turkey’s public debt is quite low, at only 30% of its GDP.

There’s been much talk about the exposure of certain European banks to Turkey. But even there, the exposure is quite limited. Of the Eurozone’s roughly €175bn claims on Turkish assets, Spanish banks have the largest exposure, with one of the country’s biggest, BBVA, having the most at risk. French and Italian banks are next, a very distant second. Korea barely slides into the top ten, and no other Asian country has any significant exposure to Turkey.

But what about those other emerging markets that the talking heads on CNBC (that know little about Ems) are worried about? The most exposed will be the countries that lack sound and coherent fiscal and economic policies. And there are several of those…

Brazil, faces a very contentious election this autumn and looks particularly at risk. South Africa has a highly respected finance minister and central bank, but faces doubts over its determination to stick to economic orthodoxy. Russia will be helped by the credibility its central bank gained through its handling of the 2014 rouble crisis, but is hampered by unpredictable U.S. sanctions policy. Another problem area is countries that have high non-bank dollar-denominated debt. And here Chile, Mexico and Malaysia all are worrisome.

But all of this does NOT mean that this is not a great time for you to invest into some other emerging markets.

Especially since the Turkey tantrum has made them very cheap relative to a very expensive U.S. stock market without really changing their strong fundamental story.

According to the highly respected stock market research firm, Research Affiliates, the cyclically adjusted earnings multiple of the MSCI EM index is now 13.7, putting it in the 25th percentile. In other words, emerging stocks have been more expensive than they are now 75% of the time. In comparison, U.S. stocks trade at a cyclically adjusted multiple of 31.9, putting it in the 97th percentile. That means U.S. stocks have only been more expensive than now 3% of the time in history.

You may wonder why I’m emphasizing valuations measures? It’s because these measures, such as CAPE (cyclically adjusted price-to-earnings ratio), are often a good indicator of coming outperformance.

As far as economic growth goes, there is no comparison between developing countries like China and India when compared to developed nations like the U.S. The percentage increase (in dollar terms) for the GDP between 2002 and 2017 for China is 713% and for India, 398%. In comparison, the U.S. economy only grew by the same as Germany – 76%, and below Canada’s 118%.

And for stock market performances, there really is no comparison. For the G7 major economic powers, the average stock market gain over the period from 2002 has been nearly 200%. But if you look at the markets contained in the Shanghai Cooperation Organization countries – China, Russia, India, Pakistan and other smaller countries, the stock market gain has averaged about 1,500% in the same time period.

These are just some of the reasons I have always been an investor in emerging markets.

I’ve already mentioned to you places in the developing world to avoid such as Turkey, Russia, South Africa, Brazil and Mexico. But what about the places where I would invest?

For that, you have to look at Asia. And here’s why…

For decades, the U.S. was far and away the biggest driver of growth in global GDP. But today, the lion’s share of global growth is coming from emerging Asia. Consider this data from the investment firm KKR…

That’s where I want to be as a long-term investor – where the growth is. 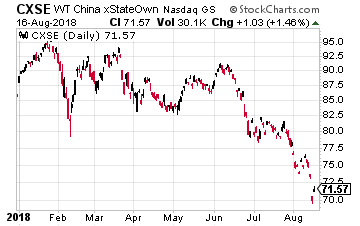 There a number of individual stocks that are and will continue to benefit from the economic growth across Asia. But for now, let me just cover broad ways to participate in that growth through ETFs.

The first ETF is one that I personally own – the WisdomTree China ex-State-Owned Enterprises Fund (Nasdaq: CXSE). The top three positions in the fund, comprising about a third of the portfolio, are the most well-known Chinese companies – Alibaba (NYSE: BABA), Tencent Holdings (OTC: TCEHY) and Ping An Insurance Group (OTC: PNGAY). With the recent selloff in China, the fund is down 19% year-to-date and 3% over the past year. 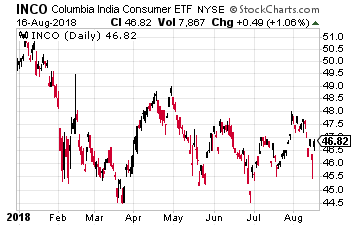 For India, an ETF to consider is the Columbia India Consumer ETF (NYSE: INCO). This is down 8% year-to-date, but is still up 7% over the last year. Its top three positions include local subsidiaries of well-known consumer brands – Nestle India and Hindustan Unilever. Number three is perhaps India’s best-known food company, Britannia Industries.