One of the main messages I give you in my articles is that you have to pay attention to global events to find the best investment opportunities before Wall Street does.

Another great example of that occurred in March at China’s annual parliamentary meeting. The one main takeaway from that meeting could be summed up by one sentence that was repeated again and again at the meeting – “We will make our skies blue again.”

The Chinese are (finally) very serious about curbing the rampant pollution in their country. This has boosted industrial metals prices globally as China curbs output of aluminum and steel in the country.

And China has cut back on the use of coal for both power and heating purposes. As a substitute for coal, the Chinese government is placing a major emphasis on natural gas.

While China does produce some of its own natural gas and imports more gas from Russia via pipelines, the all-of-a-sudden big increase in natural gas demand has had almost immediate effects.

In early December, that demand pushed LNG (liquified natural gas) prices in Asia to a three-year high, 20% higher than a year ago – and up 80% from the 2017 low – at above $10 per million BTU. According to energy consultants Wood Mackenzie, import volumes of LNG were 48% higher in the first ten months of 2017. This follows a 25% jump the year before.

A cold winter in northern China raised demand even more and made authorities desperate to meet the need. In December, Chinese oil company CNOOC (NYSE: CEO) was forced to hire over 100 LNG-carrying trucks to bring LNG over 1,300 miles from the south of China, where the LNG import facilities are, to the northern parts of the country where the cold of winter was biting hard.

And while prices have fallen somewhat since with a January thaw, this trend toward higher LNG demand from China is a feature of the energy market that will be with us for many years.

In an interesting side note for natural gas, there is talk in the market that energy kingpin Saudi Arabia may (in the relatively near future) have to import natural gas in the form of LNG in order to meet domestic needs. Demand there has risen by 50% over the past decade while proven Saudi gas reserves have only risen by 20%.

To that end, it is believed Saudi Arabia is interested in funding LNG projects around the world. Are President Trump and U.S. gas producers listening? I hope they are.

Especially since U.S. capacity to process LNG is set to grow nearly seven-fold by 2019 as five export terminals open. 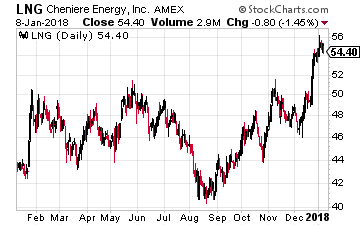 Primary among U.S. LNG exporters is Cheniere Energy (NYSE: LNG), which is the owner of the first LNG export terminal in the U.S. that has been operating since early 2016. It is exporting at its Sabine Pass facility with three trains and a capacity of about two billion cubic feet of gas per day. Its total capacity is expected to be about five billion cubic feet per day once all five trains are completed (the fourth train was recently completed). An LNG train is a liquified natural gas plant’s liquefaction and purification facility.

Chiniere’s first mover advantage is evident. In November, it signed an $11 billion memorandum of understanding for long-term LNG sales with China National Petroleum Corporation. CNPC is the parent of PetroChina (NYSE: PTR).

However, competition for Cheniere is underway here in the U.S. There are five other facilities, in addition to Cheniere’s, that will add roughly 7.5 billion cubic feet of LNG export capacity in 2018 and 2019. Here is the list of these facilities for you:

Cove Point, Maryland terminal just started operating in December and is owned by Dominion Energy (NYSE: D). It used to be an import terminal that was retooled as an export terminal with a capacity of 0.82 billion cubic feet per day.

Cameron LNG, Louisiana is owned by Sempra Energy (NYSE: SRE) and is scheduled to begin operation in 2018. It has three trains currently under construction with the first train expected to begin operation in early 2018, and the second and third trains are expected to start up during the second half of 2018. The three trains will have a capacity of 2.1 billion cubic feet per day.

Sempra Energy is also in the permitting stage of constructing an expansion to the facility, which would add a fourth and fifth train. Project completion for the expansion is expected sometime in 2019.

Elba Island, Georgia is a relatively small-scale facility owned by Kinder Morgan (NYSE: KMI) with a capacity of 0.35 billion cubic feet per day. It was originally constructed as a regasification plant for imports of LNG and it is being retooled as an export facility. The project will use ten small scale liquefaction units, constructed in two phases. The first phase will begin service in mid-2018, while the second will come online in early 2019.

Freeport LNG, Texas has three trains currently under construction. It will begin operation between the end of 2018 and the third quarter of 2019, with a combined capacity of 2.14 billion cubic feet per day. A fourth train is under development.

Corpus Christi, Texas is currently under construction on 1,000 acres controlled by Cheniere Energy. It is being designed for five trains and construction on the first and second trains began in May 2015 and is now about 70% complete. The first train is expected to begin operating in the first half of 2019 with the first three trains having a combined capacity of 2.14 billion cubic feet per day.

While I do like Cheniere Energy, there are lots of LNG projects coming online in China’s neighborhood – namely Australia. So instead of focusing on just LNG exporters, I am also looking at the carriers of all that LNG to China – the LNG shipping companies.

These companies are in the sweet spot between rising Chinese demand for LNG and limited supplies of ships. Transporting LNG requires specialized tankers and the market for these tankers has completely flipped. From a glut a few years ago, there is now a shortage of these specialized tankers.

This shortage has led to a doubling of LNG tanker rates since April 2016. And there is definitely room for further increases. Prices could double again and still not reach the highs set five years ago.

The LNG carrier shortage will not be alleviated quickly either since it takes about 30 months to build such a vessel. Between 2012 and 2014, there were orders for 66 LNG carriers. But with that aforementioned glut, orders dropped to only eight in 2017.

This will obviously benefit the companies that currently own LNG tankers. But be careful here – many of them are heavily loaded with debt. Here are two companies though I am looking at: 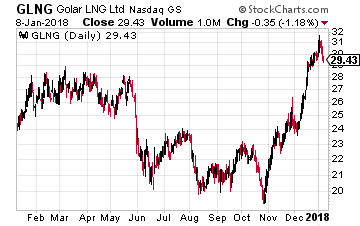 Golar LNG (Nasdaq: GLNG) – its stock is up nearly 20% over the past year. The company is one of the world’s largest independent owners and operators of marine-based LNG midstream infrastructure and is involved in the liquefaction, transportation and regasification of natural gas.

Related: A Top 10% Yield Stock to Own for Growth and Income

In others words, Golar is no mere LNG shipper, although it has 16 LNG shipping vessels. It is also focused on other aspects of the LNG pipeline including floating LNG liquefaction (FLNG) and floating storage and regasification units (FSRUs). It is the first company to convert ships into FSRUs and FLNGVs (floating liquefied natural gas vessel). This sets it apart from most of its competitors. 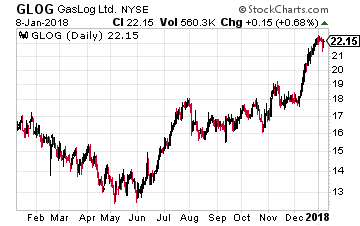 If you are looking at more of a pure-play LNG shipper, there is Gaslog Ltd. (NYSE: GLOG), whose stock is up nearly 30% over the last year, with most that gain occurring in the last three months.

Its fleet consists of 22 LNG ships on the water with another five ships on order being built. And like Golar, it is also becoming involved with FSRUs.

However, I like Gaslog because it is one of those carriers, along with Teekay LNG Partners L.P. (NYSE: TGP), that is greatly benefiting from the diversion of more and more LNG tankers to China. The daily rate of a 160,000 cubic meter LNG tanker soared to $80,000 in December from the 2017 low of $30,000 in April, according to ship broker Clarkson.

The third quarter of 2017 for Gaslog already saw record revenue and EBITDA. And thanks to Chinese demand, this should continue for the foreseeable future.

If you are looking more for income than capital gains, but still want to participate in the China LNG story, consider limited partnerships from the shipping firms.