Buy These 3 Stocks Growing in the Sharing Economy | Investors Alley

The sharing economy was birthed by a combination of big data, powerful platforms that run algorithms utilizing that big data, and the ever increasing power of the smartphone. Did you know Amazon is a card carrying member of the sharing economy? In addition to being one of the largest online retailers in the world, the company also matches buyers and sellers of goods through programs like its Fulfillment By Amazon (FBA) program.

If you’re like most people you don’t even know that half of the items you buy on Amazon are sold by a third party, and not Amazon itself. Using big data and advanced algorithms, Amazon not only recommends products to you as a buyer, but recommends products for sellers to supply, and can even provide a discount to fees charged to sellers for hot products it is trying to have listed on the Amazon site. And, these products which Amazon may or may not warehouse, and may or may not ship to you the consumer, are actually more profitable for Amazon than products it maintains in inventory and ships itself.

But it’s not just retail and transportation where the sharing economy is proliferating. In a report on the sharing economy BCG points out an example of a new sharing business formed by Mahindra and Mahindra (OTCMKTS: MAHMF). Mahindra, based in India, is one of the largest tractor manufacturers in the world. But, only 15% of India’s 120 million farmers even use mechanical equipment. To meet the needs of this underserved market Mahindra, “could have created lower-cost products by removing features or sacrificing quality. Instead, it created a sharing platform, Trringo, which allows farmers to rent equipment made by Mahindra (and even by its competitors) by placing a call.”

Finally, the World Economic Forum (WEF), in an article published just last week, highlights two of several drivers of the sharing economy which should continue to propel it forward. First, the WEF points out that ⅔ of global disposable income in the next ten years will be controlled by women.As the WEF states, “Women are already among the most ardent sharing-economy customers, and the growth of the “she-conomy” is likely to further boost this.” And Second, the WEF believes the sharing economy will play a vital role in reshaping the lives of a growing number of retirees. As individuals look to age in place and minimize disruption to their daily lives, companies already at work in the sharing economy will provide a means of earning income as well as provide care for those in need.

Let’s look at a few stocks that are already public and provide a way to invest in the sharing economy, as well as a few that are scheduled for IPOs in 2019. 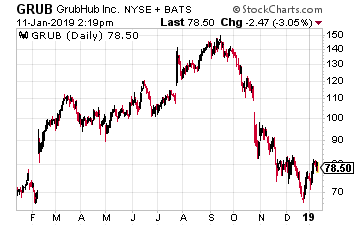 GrubHub is the quintessential sharing economy stock. The food delivery company not only delivers food from your favorite restaurant, but puts in place the entire order and delivery platform for restaurants it partners with. This has allowed non-delivery focused restaurants, on the mom and pop scale all the way up to the Taco Bells of the world, to add another revenue stream to their business model.

While the stock has pulled back in-line with the recent market selloff, the company is hitting on all cylinders. As CEO Matthew Maloney stated in their most recent earnings call, “We added more new restaurants to our network in the third quarter than any other quarter in the history of Grubhub. Our diners now have over 95,000 restaurants to choose from…” Revenue in the third quarter grew 52% year-over-year, with earnings growing 41% on a year-over-year basis. The company is projected to grow earnings an average 26% per year over the next 5 years.

The company’s stock had become a little overheated, and the recent pullback gives investors a second bite at the apple at a much better price. In addition to the stock pullback, another catalyst which makes the company attractive right now is the fact that they are beginning to realize economies of scale. This allows their marketing to be more effective, and is reducing their cost per order. Lastly, the recent addition of YUM! Brands (NYSE: YUM) as a partner should further accelerate growth. 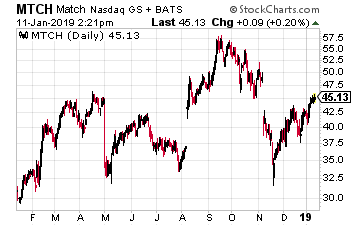 Match Group owns and operates several dating and relationship sites including Tinder, Match, OKCupid and Hinge. The company has over 57 million users of its apps globally, and was the highest grossing app in the Apple Store in 2017. The company is clearly dominating the dating app space and has built a critical mass of users which makes it difficult for competitors to infringe on the company’s market.

Match used the network effect to build out its user base with a savvy “hot or not” marketing campaign. The company’s range of apps now covers a broad spectrum of the population, from young people looking for casual social interactions to established career adults looking for long-term relationships. Match has mastered the big data world of dating, and has built a platform that is both user friendly and profitable. Revenue at their flagship Tinder brand was up close to 100% year-over-year in the latest quarter, and subscriber growth was up 61%. Earnings grew over 126% over the past year.

Match also suffered in the market selloff, and is in the process of recovering from an earnings miss last quarter, but has already recovered much of its losses. The company has a few specific catalysts that make it a good buy now. First, it is increasingly moving users to paid subscribers by adding additional relevant features to its paid subscription model. Second, the company is using data it already has to bring new products to market focused on narrower niches, making the experience more relevant for the user. And third, the company continues to enhance its algorithm to provide a better experience for users and find a relevant match on first use of its product, a major goal of the company. 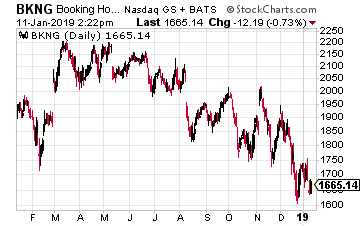 Before discussing some of the IPOs that are scheduled for 2019, I feel I would be remiss if I did not also mention Booking here. While I understand the stock is high priced, trading around $1,650, the valuation is fairly compelling. The stock currently has a PE of 19, is expected to grow earnings 16% per year on average over the next 5 years, and has profit margins of almost 20%.

Booking is not a pure sharing economy play, but does have over 5 million unique sharing economy listings on its site. This allows Booking to be an all-in-one offering for those unsure if they want a traditional hotel stay or a shared house, apartment, etc. I believe at these levels, and with a number of shared listings, Booking deserves a look as a sharing economy competitor.

Finally, I’d like to talk for just a moment about two potential sharing economy IPOs that may come public in 2019. Following on my mention of Booking Holdings, is sharing economy stock Airbnb (Nasdaq: AIRB).

Financial data is limited on companies that aren’t yet public, but we have a sense of the numbers from various media reports and piecing together data from reported private investments. Airbnb lists a little over 4 million unique properties ranging from houses to apartments to treehouses to tents, in a range of normal to exotic locations. The company was reportedly profitable for the second year in a row in 2018, after making $100 million on revenue of $2.6 billion in 2017.

While we’ll have to wait for the exact numbers to determine if the stock is a buy when it goes public, one of the things I like about the company is its innovative nature and the fact that it is not resting on its laurels as a “real estate rental” company. As CEO Brian Chesky puts it, “…people who misunderstand Airbnb, they tend to just see a bunch of real estate. But of course, if you look a little deeper, what you’re going to see are three million people — our hosts — and that’s in many ways, really, what you’re buying.”

One great example of this is the company’s Experiences business. Experiences provides travellers, or anyone for that matter, with a range of activities they can engage in when on vacation, or visiting a specific area. The “experiences” are hosted by Airbnb rental hosts, and the business is now doing over 1.5 million bookings per year. I would suggest that as the IPO nears and you are performing your due diligence on the company, look at the company and possible growth in its component parts, as opposed to viewing it simply as another online rental platform.

The final sharing economy stock I’d like to put out there is Lyft (Nasdaq: Lyft) Lyft is also projected to go public in 2019. Lyft has filed confidential IPO paperwork with the SEC as of early December 2018 concerning its IPO. A private funding round in 2018 valued the company at $15 billion, and the financial media recently valued the projected IPO at between $18 and $30 billion. Lyft reportedly had revenue of $563 million in the third quarter of 2018, losing $254 million in the same quarter.

In my view Lyft is benefitting from being second to market behind Uber. Lyft management has learned from the Uber experiences with unsatisfied drivers and regulatory challenges and has been able to avoid much of the bad publicity that has befallen Uber. If you’ve taken a Lyft ride recently, and had conversations with the driver (many of whom worked previously for Uber) like I have, you’ve heard how they were very unhappy with Uber and like driving for Lyft much more.

One of the things I like about Lyft is what appears to be a relatively aggressive move toward autonomous vehicles, which will increase margins by eventually eliminating the need for a driver altogether. In October, Lyft announced it was acquiring augmented reality (AR) company Blue Vision Labs. The company will join with an already robust autonomous vehicle initiative within Lyft, its Level 5 autonomous car division. The company is working closely with Ford (NYSE: F) to put an autonomous hybrid on the road as well.

The sharing economy is in its early stages with an abundance of growth ahead. Whether you prefer already established companies like GrubHub, Match, or Booking, or are looking forward to IPOs from Airbnb or Lyft, exposure to sharing economy stocks should be a part of your diversified portfolio.