Buy These 3 Growth Stocks Surging Because of Tariffs | Investors Alley

While Wall Street fawns over earnings reports from market darlings such as Apple (Nasdaq: AAPL), something else caught my eye this earnings season. That is the fact that the multi-front trade battles are prompting warnings from some of the largest U.S. companies that higher tariffs will squeeze their profit margins, force them to pass on the pain to suppliers and push prices up for consumers.

A look at corporate executives’ comments since the start of the second quarter reporting season show a marked change from the prior quarter. In the first quarter, attention focused on calculating the benefits to companies’ bottom lines of the corporate tax cuts Congress passed at the end of 2017. But now the focus has shifted to the trade war and rising costs.

I liken it to a three-act play. In the first act, companies were caught off guard by rising costs and their profits were hurt, negatively affecting their stock. In the second act, companies got a handle on the cost environment, announcing their intentions to pass on higher costs to consumers. Wall Street has gotten confident in that story, and stocks in sectors including consumer staples are in the process of recovering. But it is the third act that has yet to unfold and is worrisome. What happens when all of these pricing increases hit the economy?

The AutoNation CEO, Mike Jackson, said in his earnings call that so far, auto manufacturers have absorbed increases in the price of steel and aluminum without passing them on as they await the outcome of trade negotiations. But if tariffs becomes a permanent state of affairs, then manufacturers will have no choice but to try to pass those higher costs on. He said: “Consumers will not pay those higher prices. Volumes will fall, and they’ll have a material impact on the industry and on the economy.”

To date, General Motors has seen a $2 billion rise in its costs from higher commodities prices as well as currency headwinds. The company had been on track for another year of record profits until steel and aluminum tariffs were imposed. Even though GM sources most of metals needs domestically, it was hit hard because U.S. producers raised their prices by 40% to 50%, or much more than the tariffs themselves.

And there are many other companies that have sounded a note of caution too. . . . .

Caterpillar, for example, a big purchaser of steel to build its construction equipment, said it’s preparing for as much as $200 million in tariff-related costs in the second half. Industrial companies from Danaher to United Technologies said they were eyeing price increases because of their rising costs.

And for consumers, price increases will leave a bad taste: Coca-Cola said it will charge more for soda to offset the rising cost of the aluminum it buys for its cans. “I think it’s going to be one of those things that goes through into consumer pricing,” cautioned James Quincey, CEO of Coke, after the company increased prices in response to increases in an array of costs, from freight to the aforementioned aluminum used in Coke cans.

The protectionist measures threaten tech companies too. And it’s not just semiconductor companies and their supply chains that are being affected.

One prominent company that is sounding a warning about tariffs is Apple. In its latest filing with the SEC, Apple said tariffs and other protectionist measures may “adversely affect” the company. Here is exactly what Apple said in the filing:

And indeed, Apple’s fastest-growing division, which includes Apple Watch, AirPods earphones and HomePod speaker, is at risk of being caught up in President Trump’s latest proposals to slap a 25% tariff on Chinese imports. The devices that make up the bulk of Apple’s multibillion-dollar “other products” unit are highly exposed to the looming trade war. Apple will be forced to raise prices to compensate for the higher duties on the Chinese-made products or take a hit to its profit margins.

This “other products” is very important to Apple’s future since it is on track to become the company’s third-largest revenue source shortly, trailing only iPhones and services.  Apple shipped about 3.5 million watches in the second quarter, up 30% year on year, with more than half of those sold in North America. And its “other products” revenues rose 38% in the quarter, compared with iPhone revenue growth of 17% year on year.

Related: Will These 3 Popular Stocks Be the First Casualties of Trump’s Trade War?

So who will be affected by the growing trade dispute? And what will its effect be on your portfolio?

It’s not just the companies directly impacted by higher costs that you need to be concerned about. The technology sector may remain the market’s darling, but consumers don’t care which companies are impacted by tariffs and freight and which ones aren’t. They have a fixed budget, and if their cost for basics like groceries all go up in price, that will be less money left over for Amazon orders, streaming media services and smartphone replacements. In other words, if we continue down the current path, just about everyone will be affected.

Stocks-wise so far, it has been a mixed bag. Tariffs on steel and aluminum that started in March prompted Lincoln Electric, a maker of welding equipment, to slap tariff surcharges on its products. Some companies though have reported a benefit, including rail operator CSX, which hauls ore to American steelmakers that are adding production.

As time goes on, it will be harder to find companies not affected by trade policy. So what can you do with your portfolio?

I would start looking for companies that do have pricing power and have been able to pass along price increases, but that do not sell at sky-high valuations or have high expectations built into the stock price.

For example, at a glance you would think US Steel would be a winner since it has raised steel prices so much. But so much high expectations have been built into the stock that, after its earnings report, its stock fell by more than 10%.

One sector that may be worth a look is one despised by Wall Street – consumer staples. Food and other firms in the sector are starting to be able to pass along their higher costs on to the ultimate users – the consumers. 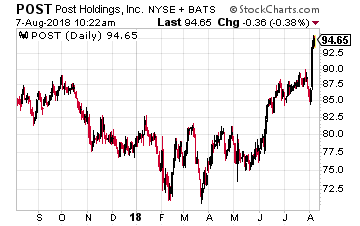 One broad way to play this sector is through the Invesco DWA Consumers Staples Momentum ETF (Nasdaq: PSL), which is actually up 10.5% year-to-date and 18.5% over the past year.

If you take a look at its portfolio, you will find some individual stocks that may be worth a look.

One of the stocks I like is the packaged goods company Post Holdings (NYSE: POST). It reported excellent earnings on August 2, with revenues for the quarter of $1.61 billion, which above Wall Street estimates. This and a positive outlook sent its stock soaring by more than 10%, bringing its year-to-date gain to over 18%. 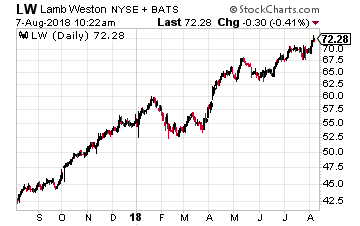 A similar story – with above expectations results for earnings per share and revenues along with positive forward guidance – unfolded at another packaged food company, Lamb Weston Holdings (NYSE: LW). The supplier of frozen potato, sweet potato, vegetable and appetizer products to retailers and restaurants globally has seen its stock move up 28% year-to-date and 67% over the past year.

Finally, there is the company best known for its spices, McCormick (NYSE: MKC).

Its stock is up nearly 20% year-to-date and over 27% over the last year. In late June, it posted great earnings and management reaffirmed its 2019 earnings and sales would be at the top end of its forecast and above analysts’ estimates. Its second quarter sales jumped 19%, boosted by the Frank’s and French’s brands it had acquired last year.