The latest chapter in the current stock market story centered around Apple. The company announced it would no longer report how many units it sells of its iPhone. While many are speculating why Apple is doing this, I believe it’s because they want to make less transparent the loss of market share in the emerging markets, where competitors like China’s Huawei are gaining share rapidly.

This episode made me think back to when I was still a licensed investment professional and would sit down with clients to discuss their financial situation. Sadly, I found a very common mistake, which I’m sure is still true today…

A lack of diversification.

Usually, clients would have way too much money in one sector – U.S. technology companies. That’s all well and good until the market hits a weak patch. Then, as we saw most recently, the heaviest losses occur in technology – the sector that had the biggest gains.

I suggested that clients move a little of money invested in technology stocks into what could be called ‘sleep well at night’ stocks. That is, quality conservative stocks, but that have a growth component. I would like to look for steady-as-you-go firms, but those that have some ‘trigger’ that will push the company into a faster growth mode from its past growth trajectory.

Just so you are clear on what exactly I mean, let me give you two examples from the consumer staples sector of two rock-solid companies – one domestic and one foreign – that are in the midst of a makeover that will lead to faster growth. 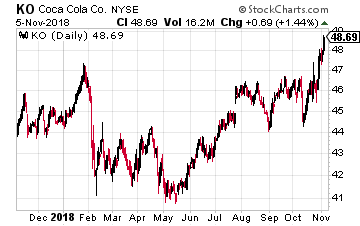 The first company is no other than Coca-Cola (NYSE: KO). I believe its new CEO, James Quincey, has just begun a change in Coke that is larger than what McDonald’s CEO Steve Easterbrook did to the change the fortunes at the ‘Golden Arches’.

First, Coke pulled off a $5.1 billion deal to buy the Costa Coffee chain from Britain’s Whitbread. The transaction represents a full-fledged leap into the global coffee market, where it has little presence currently. “Hot beverages is one of the few remaining segments of the total beverage landscape where Coca-Cola does not have a global brand,” said James Quincey, president and CEO of Coke. “Costa gives us access to this market through a strong coffee platform.”

This move continues Coke’s process of diversifying away from the fizzy and sugary drinks that made the company famous. These type of drinks have declined in popularity among increasingly health-conscious consumers. The deal is all part of the company’s effort to reposition itself as a “total beverage company”.

According to Euromonitor, the global coffee industry is valued at more than $80 billion, and has been expanding at an annual rate of more than 5%. Here in the United States – the world’s biggest coffee market – most of the growth is coming from a resurgence in the café culture among millennials aged 18 to 34.

According to a recent survey conducted by the National Coffee Association, 15% of millennials had their last cup of coffee in a café and 32% had an espresso-based drink the day before the survey, the highest share for any age group. These are the type of consumers Coke is trying to reach through its purchase of Costa.

As Mr. Quincey points out, coffee is among the “strongest growing [beverage] categories in the world” and the company was missing out on this macro trend. As the chart below shows, the potential for growth of coffee beverages versus soft drinks is high. 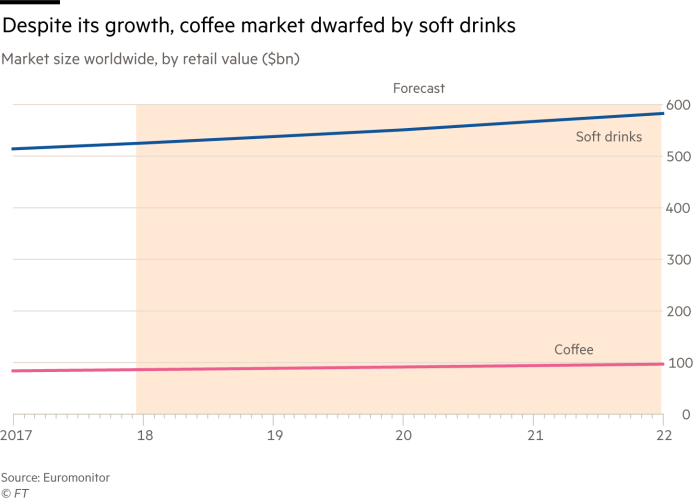 And consider that Costa has recently begun its push into China, where it pitches its drinks to Chinese consumers as a luxury treat. It still has only 460 shops there, so the potential for growth is enormous. Starbucks has 600 shops in Shanghai alone. Costa did not have the financial firepower for a big push into China, but now with Coke’s financial muscle, it does.

And there’s more to the transformation of Coke than coffee… it may go to pot too.

I have no doubt that drinks containing cannabidiol (CBD), a non-psychoactive marijuana ingredient focused on pain management, could become a very big business for Coke.

Related: Buy These 3 Stocks to Profit From Marijuana Legalization

Cannabis research firm Brightfield Group, recently raised its projections for the CBD industry, finding it could reach $22 billion in market size by 2022. If Coke is able to capture just 10% of that projected market size, it would bring in $2.2 billion in revenue by 2022.

Even before the company-altering changes, Coca-Cola is already coming alive. In the latest quarter, it produced a 6% rise in organic sales, helped by bottled water and lower sugar alternatives to the soft drink. Latin America led the way, up 19%, while Europe, the Middle East and Africa rose 9%. North America was slower, up 2%.

Make Up for Losses With L’Oreal 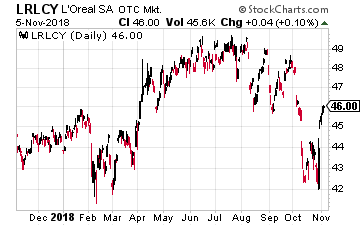 The second company in the consumer sector comes from Europe and is best known for its cosmetics, France’s L’Oreal (OTC: LRLCY). And here the main story is Asia and China.

Its stock surged more than 7% after its recent earnings report thanks to Asian demand for its high-end beauty products showing no sign of waning, despite the trade war. Sales in the Asia-Pacific region soared 25.8%. This demand pushed third-quarter sales to the highest quarterly growth rate in a decade!

The acceleration in growth in the third quarter was led by the company’s luxury division, home to brands such as Lancôme, Yves Saint Laurent and Giorgio Armani, which grew by 15.6%. Its active cosmetics division lifted revenue by 13.1%, driven by demand for so-called dermo-cosmetics, products that focus on skin health.

Its travel retail and e-commerce divisions are also achieving rapid growth. L’Oréal said that travel retail gained 29.9% during the quarter, while e-commerce was up 38.3% and now represents almost a tenth of total sales. E-commerce is accelerating thanks to the success of L’Oréal’s luxury brands on sites such as Alibaba’s Tmall platform in China.

I fully expect L’Oreal to continue to perform well because Asia’s enthusiasm for skincare and makeup is unlikely to fade. Even if an economic slowdown hits, sales of low-ticket luxury items will hold up better than more costly items. And Chinese per capita spending on makeup is still just a small fraction of the U.S. figure, so there is ample scope for growth there.

Neither company will go up 25% a year, as do tech stocks when they’re hot. But they will allow to sleep well at night and give you a decent total return. That’s why I do own both companies.