President Trump is not the only one using the words “mission accomplished”. On April 13, the International Energy Agency (IEA) said that OPEC could use those words in its battle to reduce the global glut of oil that had been a problem since 2015.

The IEA said oil stockpiles had dropped dramatically over the past year and could dip below five-year average levels in the coming months. Lowering inventories to that level was a main target for OPEC and Russia when the two countries began to curb output in 2017 to balance an oversupplied market and bolster oil prices.

Falling inventory levels and rising geopolitical tensions in the Middle East combined to push oil to its biggest weekly advance, in the week ended April 13, in eight months – up nearly 8% – and it is still trading at the highest level since late 2014.

But that isn’t the big news in the oil industry. Instead, the real news is the effect that Big Data is having on transforming the entire oil industry.

The oil industry is finally starting to adopt the latest innovations in information technology. And it certainly needed to change. In late 2014, MIT Sloane Management Review and Deloitte scored the oil and gas sector’s “digital maturity” at only a 4.68 out of 10.

Techniques such as advanced data analytics – used by tech titans like Amazon and others to disrupt any number of consumer-related businesses, are now being applied to the energy industry. The end result should be similarly dramatic.

The opportunities being opened up by adoption of these techniques include analysis of rocks to target oil well placement more precisely in oil-bearing areas, oil reservoir models and seismic analysis to allow production to be maximized through the lifetime of an oil field, and automation along with predictive maintenance that can make oil field operations more efficient and cheaper while also enhancing worker safety. 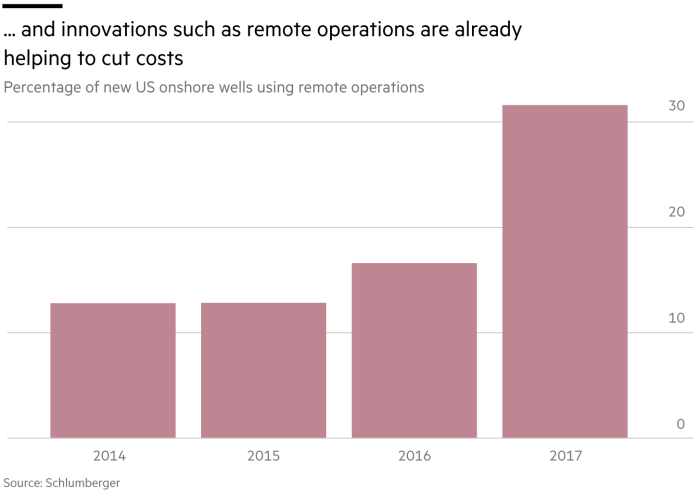 There is the hardware side of this technological innovation too. For example, the Chevron Tengiz oil field in Kazakhstan, that will start production in 2022, will have about one million sensors collecting data! The cost of these types of sensors is falling while their sophistication is rising allowing for more and more data to be collected in all aspects of an oil field operation.

But the real difference today is the rise of cloud computing. This makes it possible to store and analyze data at a relatively low cost. That is important to an industry that generates huge volumes of data, (think temperature and pressure readings and video footage as well). And the amount of data is rising almost exponentially. Bill Brain, CIO at Chevron, told the Financial Times the volume of data the company handles has been doubling every 12 to 18 months.

But the problem up to now has been that oil companies have done very little deep analyses of the all the data they have. Most of it went unused. But now with cloud computing, the data can be collected and correlated in one central location.

The IEA estimates that oil production costs will be cut 10% to 20% by the adoption of digital technologies, although I believe the cost savings will be even greater. For instance, BP worked with a Silicon Valley start-up on an optimization model that was able to raise output in its 180 well pilot project by 20%.

Either way, the likely result of all this innovation in the oil industry will be even more oil being produced cheaply. Currently, companies are recovering only about 8% to 10% of the oil in place in many U.S. shale wells. So if adoption of new technologies could raise that rate by even a few percentage points, the results would be dramatic. The end result would be even more downside pressure on the oil price than caused by the advent of the shale revolution here in the U.S.

While this may not be good news for oil price bulls, the adoption of new technologies by the oil industry is great news for the companies that provide the technology – the oil service companies. 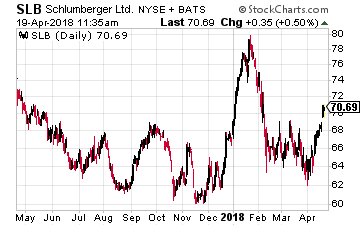 The number one company here is the world’s largest oil field services firm, Schlumberger (NYSE: SLB), which was founded in 1926. A sign of the change in its business since then is the fact that today it has a software technology innovation center that sits at the heart of Silicon Valley.

In 2017, Schlumberger launched a new software system called Delfi, which makes it possible to bring together and coordinate the way oil wells are designed, drilled and brought onstream into production. This allows Schlumberger’s clients to maximize output from an entire oilfield. The company also has worked with Nvidia in adapting its technology for viewing and analyzing seismic data.

The company’s hope is that, by the end of 2018, oil companies around the world will be using its new technologies “on a regular basis”. Schlumberger’s executive vice-president for technology, Ashok Belani, said to the Financial Times that adoption of this technology will cut production costs by 40% in U.S. shale fields within the next decade! 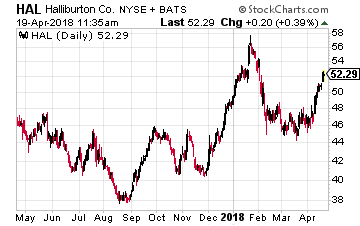 The next company is Halliburton (NYSE: HAL), which is the world’s number two oil field services provider. Like Schlumberger, it is also working with Nvidia on adapting technology for viewing and analyzing seismic data.

Last August, Halliburton announced a major partnership with Microsoft to ‘transform the oil industry in radical ways’. The goal is to digitize the entire upstream oil industry and improve exploration results through the application of deep learning and augmented reality to reserve estimates, modeling and simulations.

The two firms are collaborating in areas including machine learning, augmented reality and user interactions. Halliburton will use Microsoft’s HoloLens, Surface, Azure and its Internet of Things solutions. 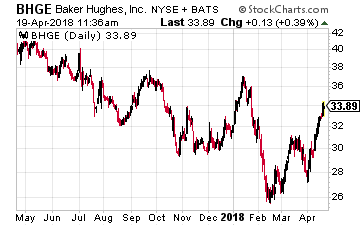 Finally, there is Baker Hughes (NYSE: BHGE), which is currently 62.5% owned by General Electric. I expect GE to spin this off in the not-too-distant future.

The company also has a partnership (announced in 2017) with Nvidia, but this one involves using artificial intelligence (AI) to help extract and process oil and gas more efficiently. It believes that it is just scratching the surface of what AI can do for the industry.

It also has a California technology center that it shares with the software operations arm of GE. Baker Hughes uses GE’s innovative industrial software program, Predix, in oil and gas applications.

With the oil industry finally moving toward digitization, these stocks should have a brighter future ahead of them.