Betting On The Market Not Moving? | Investors Alley

The last several weeks have been interesting for stocks to say the least. We simply are not used to the volatility – the daily swings – we’ve been getting nearly every trading day. It’s been years since we’ve had anything close to market conditions like this.

Moreover, volatility indicators have remained high but stable throughout the entire scenario. Typically you see volatility spike and the move down (slowly or immediately). However, volatility has spiked and is remaining at high levels.

For an example of what I’m referring to with volatility, look at the chart of the VIX below. Keep in mind, the VIX is the implied volatility index of the S&P 500, it tells us what traders think the volatility is going to be doing over the next month. 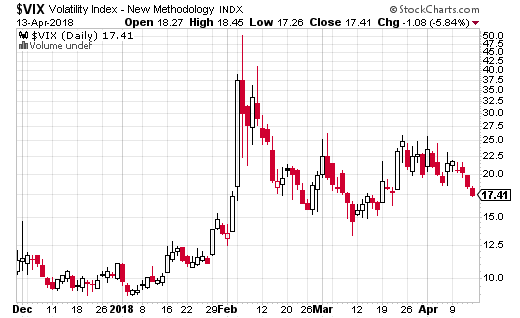 You can see that while the VIX is off the highs from early February, it basically has been moving sideways for the last 8 weeks or so. What’s more, the sideways average level is well above what the VIX was trading at prior to the February 5th selloff.

So how do options traders make money in this environment? It doesn’t seem like either long volatility or short volatility is going to pay off. Well, at least one trader is going the short volatility route with the VanEck Vectors Semiconductor ETF (NYSE: SMH).

For those not familiar, SMH tracks the 25 biggest public semiconductor companies in the US. It’s a fairly popular ETF, trading about 6 million shares a day on average, and nearly 40,000 options contracts per day. 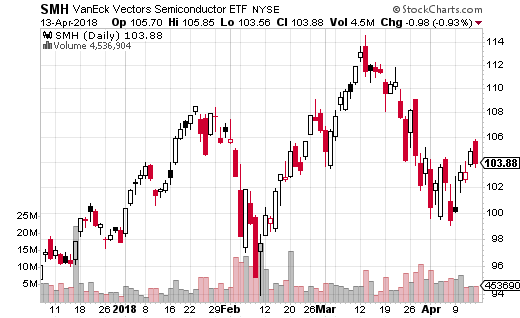 You can see from the chart, SMH has been pretty volatile lately, and has traded in a wide range. However, with earnings coming up, the trader I mentioned earlier believes SMH isn’t likely to do much over the next week. He or she sold 1,000 of the April 20th 104.5 calls and 104.5 puts (known as selling the straddle) for $3.24 total in premiums.

By selling the straddle, the trader is expecting SMH I remain in a range from roughly $101 to $108 over the next week. With it just being the start of earnings season, it is very possible the ETF will remain in that range for the short-term. The closer to $104.5 by week’s end, the more premium the trader keeps.

At best, the trader collects all $324,000 of premium. At worst, well the risk is unlimited if SMH were to shoot higher or collapse lower. That’s why I don’t recommend selling a straddle, ever. Not only does it carry unlimited risk, but the margin requirements for that type of trade are through the roof.

For about half the premium of the straddle, you’d only be protected from about $101.50 to $106.50 with this strategy. But, your risk is capped at $4.50 max loss… a huge difference from unlimited risk.

This type of strategy is known as selling an iron condor. In my opinion, it is far and away the best way to trade a stock you think is going to stay in a certain range for a certain period of time.