Despite the volatility and heavy stock selling in October, many analysts are expecting the remainder of 2018 to be bullish. The S&P 500 was only up 3% year-to-date after the October bloodbath (prior to mid-term elections), so it stands to reason that stocks are more likely to go up in the final two months of the year than continue to plummet.

Of course, stocks don’t move in a vacuum. There are key factors which could heavily impact the direction of the stock market over the next several weeks. While the impact of the mid-term elections is the most talked about variable, ultimately, interest rate policy may be the more important.

That’s not to say politics don’t matter – they do to some extent. Tax policy matters for certain, although there isn’t likely going to be much change on that front until the next presidential election. Tariffs matter and we’ve seen what impact they can have on quarterly earnings. This week’s election could possibly have an impact on tariff policy, although there’s nothing definitive in that regard.

On the other hand, what the Fed says at this week’s FOMC meeting could have a more meaningful effect on the market. Most importantly, if there’s a definitive statement on interest rate increases or lack thereof, we could see a major shift of funds between asset classes. In other words, stocks could move quite a bit either way if the Fed says anything unexpected.

Getting back to my original statement, it does seem like most analysts are leaning bullish for stocks once this week is in the rearview mirror. It could simply be a matter of having a significant amount of uncertainty resolved, regardless of the results.

I tend to agree that the markets should see a significant downturn in volatility for the rest of the year, pretty much no matter what happens with the Fed and elections. What happens with stocks is a bit more of a toss-up.

In the options market, I’ve seen quite a bit of action betting on a downturn in volatility – which typically coincides with stocks going up. On the other hand, I did come across a pretty large trade which looks like it could be using a bet on higher volatility as a hedge against an additional downturn in stocks. 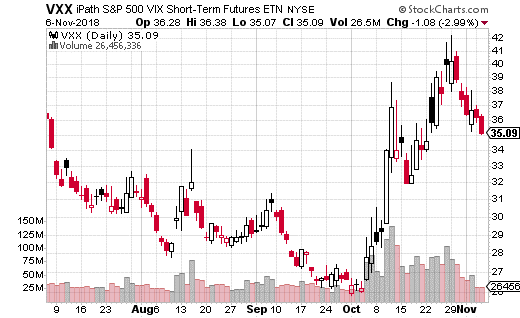 A strategist placed a large, three-part bullish trade on VXX. Roughly 14,000 January 2019 37-47 call spreads were purchased (buying the 37 strike, selling the 47 strike). At the same time, the call spread was financed by selling January 30 puts (also about 14,000 times). The trade was structured in a way that the trader only had to pay about $0.10 per spread in total.

Basically, anything from $37 to $47 in VXX in January makes money (with the max coming at $47). Any price below $30 at that point loses money. And, anything between $30 and $37 is roughly breakeven. It’s a little risky because of that $30 floor – but volatility also isn’t likely to plunge far below $30 given everything going on in the US right now.

I believe this is simply a cheap hedge against a further selloff in stocks. The short 30 put makes it a bit risky, and not the sort of trade casual traders should make. Still, a VXX hedge through January isn’t a bad idea just in case the markets take a turn for the worse.

In that case, I recommend a basic call spread in VXX. To lower the cost of the spread, we could do a December 21st expiration instead of January and narrow it to a 5 point spread instead of 10. Moreover, we could use an at-the-money spread like a 35-40 call spread or 36-41 call spread (with VXX at $35).