A Quick Trade to Profit from This Summer’s Volatility? | Investors Alley

However, there are still plenty of investors out there who aren’t familiar with how volatility is measured.  We can put a definitive number on how volatile the market is.  Generally speaking, the VIX (S&P 500 Volatility Index) is how most people look at volatility in numerical form.

Clearly, the popularity of the VIX has grown astronomically to where anyone who watches financial media channels should be familiar with it.  Moreover, ETPs (exchange traded products) associated with the VIX have taken off in terms of trading volume.  In fact, ETPs such as iPath S&P 500 VIX Short-Term Futures ETN (NYSE: VXX), have become a regular part of many traders’ books and investors’ portfolios.

VXX can be used for hedging short-term volatility risk or speculating on the direction of volatility.  Despite some hiccups with volatility ETPs (back in February), VXX remains extremely popular. It trades an average of 35 million shares and 300,000 options per day.

Another interesting aspect of VXX is that it seems to be used by institutional and individual investors about equally.  A volatility product that bridges the gap between Main Street and Wall Street?  Who would have guessed that was possible just 10 years ago?

That being said, it can be useful to look at options action in VXX to see where short-term volatility may be headed.  Sentiment in VXX can be quite skewed based on what’s going on in the overall markets.  Since volatility normally mean reverts (to low levels), there’s often a lot of bearish sentiment in VXX.  But when macro conditions get hairy, you’ll see VXX bullish sentiment spike as traders rush to hedge their portfolios.

Lately, market conditions have been more volatile than what we’re used to seeing during the summer trading doldrums.  The big catalyst is international trade discord, mostly sparked by US tariffs and the corresponding retaliatory tariffs.

At least one very big trader doesn’t believe anything catastrophic is going to happen through early August.  The trader sold a bunch of VXX 60 calls expiring August 3rd with the stock at about $36.  Now, $60 may seem a long way off from $36 (and it is) but also keep in mind that when volatility spikes, it can shoot to the moon in a short period of time. 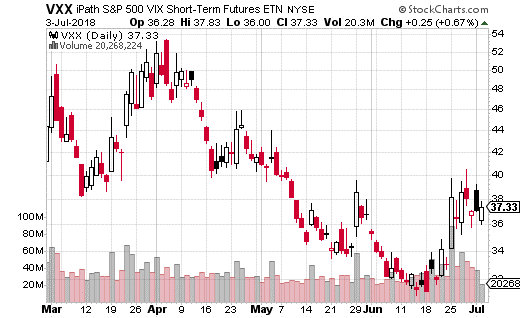 You can see from the chart that as recently as May, VXX was over $50.  So, when you see a trader sell over 8,000 calls with a strike of 60, you can be confident he or she feels pretty strongly that volatility isn’t going to go nuts this month.  By the way, the trader collected $0.62 per contract, or about $510,000 in premium which will all go to the trader if VXX expires below $60 on August 3rd.

I think this is a good idea for a trade with a solid probability of success.  However, I don’t ever recommend selling naked calls.  Selling call spreads is a lot safer and caps your max loss.  On the other hand, it’s even easier and safer to just buy puts on VXX.

The August 3rd 34 put only costs about $1.50, making the breakeven point $32.50.  If the markets remain calm, VXX could easily be south of $30 by then.  But the big plus to buying VXX puts is your max risk is only the cost of the put. With how volatile volatility can be, I believe most traders are better off severely limiting risk when trading it.