If you have any interest in economic policy, especially macroeconomic policy and repercussions, now is about as interesting as it gets. I realize most people don’t get a hoot about macroeconomics, but it can be very useful for analyzing trading opportunities. (For me, it goes beyond that since I have a degree in economics which focused heavily on the macro side of things.)

We’re experiencing a real life experiment on how tariffs and trade wars are bad for an interconnected global economy. Tariffs can gain political traction because they are supposed to create or protect domestic jobs. However, as soon as other countries imposed their own tariffs, it generally just comes back to bite the industries that initially were supposed to be insulated.

For a developed nation like the US, a trade war would probably result in something like a 3% decrease in GDP. That’s a big deal when you’re talking about trillions of dollars, but it’s also not catastrophic. On the other hand, tariffs can be extremely detrimental to the growth of emerging market economies. 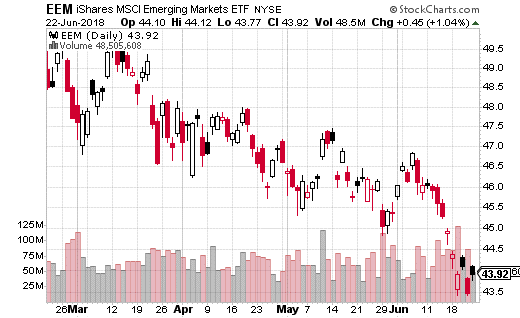 As you can see from the chart below, emerging markets have taken a pretty big hit lately. EEM started trending down when tariffs became a major news item. Since the actual implementation of the tariffs, it has dropped even lower.

However, a massive options trade last week in EEM suggests that the ETF is done falling for the rest of the month. This trade, known as a put ratio spread, involved a 100,000 by 200,000 put spread – which is about as big of an options trade as you’ll ever see.

That means if EEM stays where it is or moves up, the position will generate $600,000 in profit. The max gain is at $42 on expiration, where the trade would earn $0.56 or $5.6 million. However, below $42 in EEM is where the risk comes in. Every $1 below $42 would result in roughly $10 million in losses. Clearly, there’s big money betting on EEM staying above that level through the end of June.

I like the idea of this trade, but obviously not the risk involved. In fact, selling a put spread is tough in general because the options are so cheap. I think you may be better off betting on a reversal straight up using a call spread.