5 Stocks to Buy in the AI Race Between the U.S. and China | Investors Alley

While President Trump fights the battle to save jobs in old-line industries such as steel, he may be losing the war for the future (despite the imposition of direct tariffs on China). The United States has always been predominant in new technologies, such as artificial intelligence (AI). But now China is rapidly closing the gap. 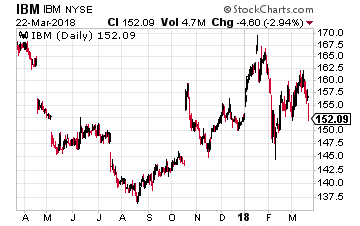 Think about some examples of U.S. prowess in AI: DeepBlue, which defeated chess grandmaster Garry Kasparov, was developed by IBM (NYSE: IBM), as was Watson, which defeated champion Jeopardy players in 2011. The robot Stanley, which demonstrated the feasibility of driverless cars in 2005, was developed at Stanford University in the heart of Silicon Valley. And don’t forget that one reason for U.S. dominance has been Darpa (Defense Advanced Research Projects Agency), the U.S. military research funding agency, whose backing was behind many of the most prominent research papers in AI.
However, one recent example highlighted how China has come to the fore in AI. 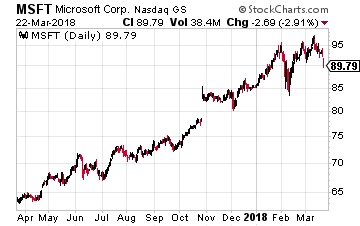 In January, companies from all over the world subjected their artificial intelligence systems to questions from the Stanford Question Answering Dataset, which assess reading comprehension. The winning AI systems came in at a few percentage points above the average human score of 82.3%. The two winning companies (in a virtual tie) were Microsoft (Nasdaq: MSFT) and Alibaba (NYSE: BABA).

Yes, the Chinese e-commerce giant is rapidly becoming a powerhouse in artificial intelligence. 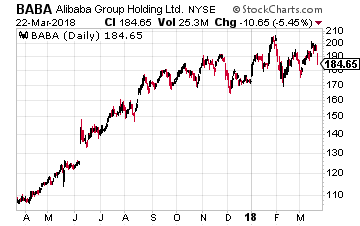 The evidence can even be seen in its latest Singles Day event, the world’s biggest shopping day. Alibaba used AI to generate 400 million customized banner advertisements in the month leading up to the shopping day. It also used chatbots, to answer 3.5 million simple questions a day over the pre-sale period, such as “Where’s my package?”

And on its Taobao e-commerce platform, users can search by image using deep learning, a technique designed to emulate the way a human brain works, to find a matching or similar item. This enables shoppers, for example, to find a dress worn by a celebrity to order it… an ability that does not exist on Amazon today.
Fellow Chinese tech titans 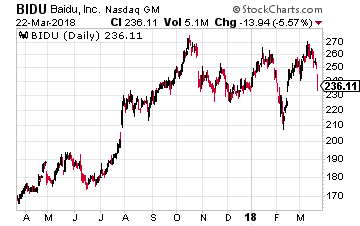 Examples of what Tencent is doing include using AI to detect diseases like lung cancer an early stage and having its FineArt AI program easily defeat China’s human Go (a board game). But the Chinese push into AI is broader than these three companies. 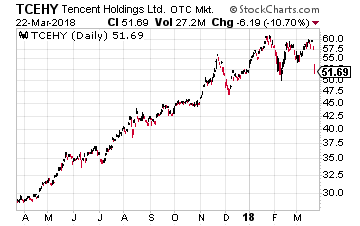 One key reason behind China’s rapid growth in AI is sheer numbers. You see, the machine-learning techniques behind the current AI boom are extremely data hungry. To recognize human faces, translate languages, make medical diagnoses, pilot autonomous vehicles, and numerous other tasks requires huge quantities of “training data”, which is the fuel for machine learning algorithms that we generate every time we go online or use our smartphones.

With a population larger than the U.S. and Europe combined (and limited privacy laws), Chinese companies like Alibaba, Tencent and Baidu have a huge advantage over U.S. firms in terms of access to all sorts of data.

If you want to get an idea of how fast China is closing the AI gap with the U.S. just look at the recent annual meeting for the Association for the Advancement of AI. The first meeting in 1980 was an all-U.S. affair. But at the February 2018 meeting, China submitted about a quarter more papers than the U.S. (1242 to 934). And more importantly, it lagged the U.S. in papers accepted by just three.

There are a few reasons behind this rise to prominence in AI by China. The first is backing from the central government, which has a specific target for becoming an AI leader within a decade.

The second reason is that China is overtaking the U.S. in terms of AI start-up funding. Technology research firm CB Insights says that in 2017, 48% of the record global investment ($15.2 billion) into AI start-ups went to China. That is a huge jump from just 11.3% in 2016.

And forget about the old thought about China just being copycats… that hasn’t applied in decades. China has beaten the U.S. in AI-related intellectual property as well. Chinese patent publications with the terms “artificial intelligence” or “deep learning” in the title or abstract surged from 549 in 2016 to 1,293 in 2017. This compares with just 135 and 231, respectively, in the U.S., according to CB Insights.

It’s not a straightforward victory for China though. In terms of the volume of individual deals, the country still accounts for only 9% of the total, while the U.S. leads still in both the total number of AI startups and total funding overall. The bottom line is that China is ahead when it comes to the dollar value of AI startup funding, which CB Insights says shows the country is “aggressively executing a thoroughly-designed vision for AI.” 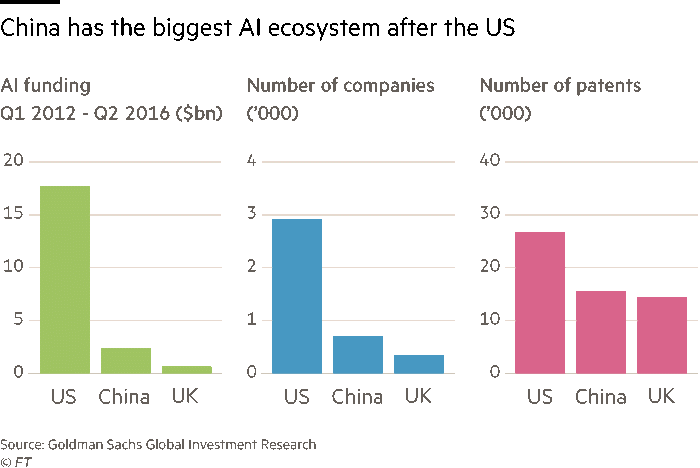 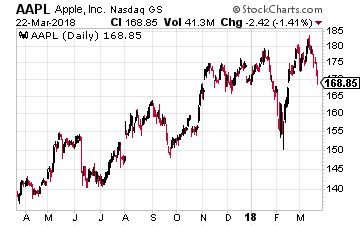 China has a vision because it realizes how important AI will be in the future. The former chief scientist for Baidu, Andrew NG, said in 2017 that AI is the “new electricity”, and that “just as electricity transformed many industries roughly 100 years ago, AI will also now change nearly every major industry”. I totally agree. Now the question remains whether the U.S. or China will be the main ‘generator’ of an AI future.

A good way for you to ‘hedge’ on that outcome is to first own the well-known AI leaders in the U.S. – the aforementioned Microsoft as well as other companies that have been snapping up AI start-ups, Apple (Nasdaq: AAPL) and Alphabet (Nasdaq: GOOG). Since 2012, Google has bought 14 AI start-ups while Apple has acquired 13 AI start-ups. 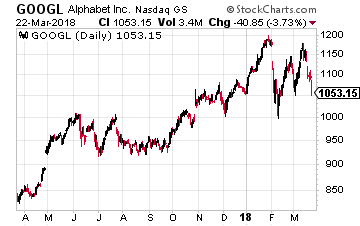 But then you must also own the leaders in China as well. While many AI companies trade only in mainland China, the so-called BAT stocks (Baidu, Alibaba, Tencent) are easily available to you here in U.S. markets.