It seems like most U.S. financial media cannot quit gushing about the new tax laws. The coverage is universally positive – I’m waiting to hear that the tax cut will cure the common cold.

However, the media ignores the fact that some companies will end up paying higher tax bills. All thanks to the provision in the law that limits deductions on interest payments.

This is a major negative for any companies with a heavy debt load.

As David Fann, CEO of the private equity advisory firm Torrey Cove Capital Partners LLC, told Reuters, “It [the new tax law] is a deviation from what has been allowed in the last 50 years. This is a radical change.”

The new restrictions on interest deductibility will mean that companies that have EBITDA less than double their interest payments will see “little or no benefit” from the tax reform package, according to Standard & Poor’s, the credit rating agency.

And some firms will suffer under the new rules. S&P Global Ratings estimates that about 70% of companies whose debt amounts to more than five times EBITDA would be negatively affected by the interest deductibility cap.

Prime among the companies affected will be those shaped by private equity, which loves to saddle companies with lots of debt. According to Moody’s around a third of all leveraged buyouts will be worse off under the new tax system.

The changes in tax law could mean that a company like Toy “R” Us may be less able to come out of bankruptcy proceedings. It also puts into question the future of companies such as WebMD Health that was bought by private equity firm KKR. Dell Technologies will now have to shoulder more of the burden of its $2 billion in annual interest payments from its $60 billion merger with EMC Corporation in 2016.

As far as sectors go, there are leveraged companies in just about every sector. Although Moody’s says that the sectors with the most buyout activity are technology, healthcare and aerospace. The trade finance firm Greensill Capital says it feels that these industries should be watched for companies with a lot of debt: oil and gas, coal mining, casinos and trucking.

Greensill said that, based on 2016 earnings in the exploration and segment of the oil industry, firms would have been unable to claim tax relief on 39% of their interest payments, and for 2022 onwards, they would be unable to claim relief on 97% of those payments. Of course, with higher oil prices now
the calculations would not be quite as severe.

Bottom line – there really isn’t just one sector you should avoid. You must look at individual companies on a case-by-case basis. Here are just a few companies on the must avoid list. 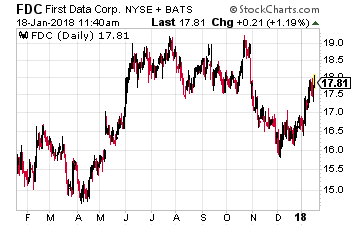 This company was bought by KKR in 2007, at the height of the leveraged buyout boom, for $29 billion. KKR then brought First Data back as a public company, via an IPO, in October 2015.  As of a recent 2016 filing, First Data is still burdened with a whopping $18.5 billion in junk-rated debt, which generated the company nearly $1 billion in interest expense over the past year.

The limiting of interest deductibility will mean a lowering of its net income going forward. I doubt that the stock will perform as well over the next year as it did over the past year (up 15%). 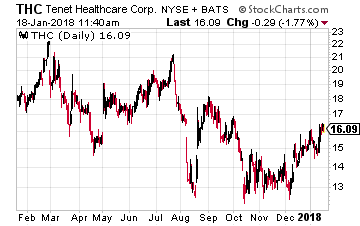 Tenet Healthcare (NYSE: THC) owns and operates hospitals and other healthcare facilities. It is one of the largest investor-owned healthcare delivery systems in the United States.

However, it had problems even before the passage of the new tax law. Its revenues have actually declined over the past two quarters. And its debt has been on the rise, climbing in 2016 by 5% year-over-year to $14.4 billion.

And even though its debt declined slightly in 2017, its interest expense rose 6.2% over the first nine months of the year. It already deploys much of its existing cash flow toward the payment of the interest on its debt. No wonder its stock is down 14% over the past year. And now it’s likely to get worse. 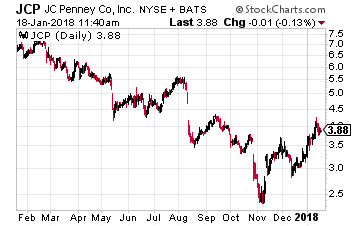 JC Penney (NYSE: JCP) is a well-known department store chain with still 875 stores across the U.S. It is almost a poster child for being Amazoned. Adding to all the woes it faces on the competitive front is its heavy debt burden in excess of $4 billion.

At the end of the latest quarter, JCP had a debt-to-capitalization ratio of nearly 79%. In its SEC filing in November, the company said that disallowing tax deductions on interest “could have a material adverse effect on our results of operations and liquidity.”

The company, which has experienced a pickup in its business recently, has said that its goal is to reduce the net debt to EBITDA ratio to less than three times. The change in the tax law has made that goal even more of a priority. If it does not succeed, the stock – down over 43% during the past year – will continue on the slippery slope toward zero.

What does the change in the tax law mean to your portfolio?

It should be mainly good. But I would check to see if you own any highly-leveraged companies. Especially check any that may have been IPO’d by a private equity firm. If you do own any of these type of companies, it may be time to sell them. The tax law changes mean tougher times ahead for these financially-engineered firms.

The companies above and others with high debt levels may start feeling the squeeze but most firms welcomed the corporate tax rate changes that have effectively cut taxes for most corporations by around 40%. That’s a big deal and no bigger than for domestic companies tied directly into the coming revolution called The Singularity. In fact, it’s already here all around us transforming industry, government, education, jobs, transportation, and communication. Every aspect of our modern society is being affected. It’s been estimated that all told, The Singularity represents of $100 trillion (not a typo) in wealth creation of the next seven years. The question is whether you’ll get your share of that $100 trillion. Check out my new FREE report, “The Industrial Singularity”, for details on how to get started. Click HERE.