The cut in the U.S. corporate tax rate from 35% to 21% is supposed to do everything from juicing the U.S. economy to levels not seen in decades to enriching both shareholders and consumers alike. But the reality is likely to be quite different.

The first thing it will bring is a muddied fourth quarter earnings season for investors. A one-time tax on accumulated offshore earnings and revaluations of deferred taxes, based on the new rate, means a lot of potential charges and writeoffs for multinational companies. For firms that report only GAAP earnings, the headline impact on earnings could be quite large.

Investors should look through these one-off charges and focus on what the long-term effects will be on the companies they are invested in.

While many on Wall Street make proclamations about the benefits of the corporate tax cut for banks, I believe the sector still faces too many headwinds (like continuing low interest rates) for me to be interested in investing into banks. Instead, I’d rather focus on three other sectors – with still relatively low valuations – that should benefit from the changes in the tax law regarding U.S. corporations.

One of the biggest beneficiaries of the tax cut is the U.S. airline industry. Since most of their income is taxed domestically, the lowering of the tax rate to 21% from mostly in the mid-30s%, is a big deal. 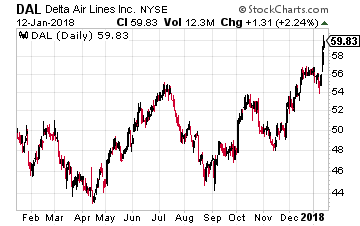 Take Delta Air Lines (NYSE: DAL), for example. Just last week it said that the tax cut will boost its earnings by about $800 million a year. That translates to about $1 per share in increased earnings for 2018. Delta management raised their earnings per share guidance for 2018 to a range of $6.35 to $6.70, up 20% to 30% from the year earlier level.

Delta, like many U.S. airlines, pays no cash taxes. However, Delta expects it will become a cash taxpayer in 2019 and 2020, so the lower rate will be a boon.

The tax cut is a bit of icing on the cake for Delta, which is doing very well currently. In the latest quarter, it reported an 8.3% revenue rise to $10.2 billion, which beat market expectations. Passenger unit revenue (PRASM) increased 4.2% in the quarter as Delta regained some of its pricing power following a nasty airfare war.

That’s the danger for the airline industry and the tax cut. Will the airlines just use the windfall to launch into another round of airfare wars? The industry has squandered windfalls in the past, such as from plunging oil prices.

Speaking of oil, the oil industry should be another beneficiary of the changes in tax law. According to Bloomberg, it pays the second-highest effective tax rate of any sector – 37%. So a drop to 21% is an obvious boost.

Other tax perks for the industry were left in place. For instance, the century-old tax treatment of allowing oil companies to expense intangible drilling costs was retained. As was another century-old treatment that affects small independent companies and royalty owners – the percentage depletion deduction.

A new provision allowing businesses to expense the full cost of new investments in certain plant and equipment for the next five years will give a boost to many in this capital-intensive industry. Giants like Chevron have an $18.3 billion capital and exploration budget in 2018 and ExxonMobil has an even bigger $22 billion budget. 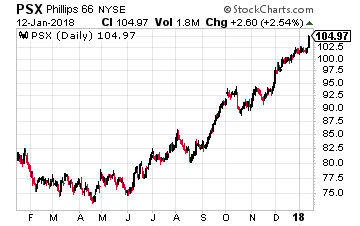 And it’s not just the big oil firms to benefit. The oil refining segment should really get a major boost. The largest company in the segment, by market capitalization, Phillips 66 (NYSE: PSX), will receive a 16% boost to 2018 earnings according to an estimate from Piper Jaffray’s Simmons & Company energy investment bank unit.

Phillips 66 is a leading player in each of the segments it operates in: refining, chemicals and midstream.  The company will invest $2-$3 billion in capital investments this year. Yet, it still increases payouts to shareholders on a regular basis.

The third sector to look for benefits from the tax cut is retail. The tax cuts should give them a respite from being Amazoned out of existence, thanks to a soon-to-be increased cash flow. This holds true for the vast majority of retailers whose operations are domestically based. Wall Street analysts believe the average retailer will get a 15% earnings boost from the changes in the tax law. 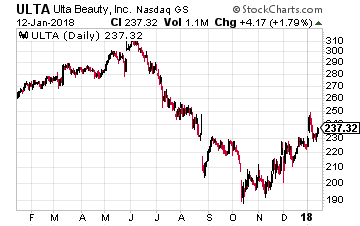 One of my favorites in the sector is Ulta Beauty (Nasdaq: ULTA), which operates 1,058 stores and generated $4.8 billion in revenues in 2016. It should get a double boost – not only from the tax cut itself, but from consumers with a little extra in their pocket spending on simple luxuries like makeup, lip gloss, etc. Perhaps that’s why the stock is already up over 6% year-to-date.

Hopefully, the tax cuts will reinvigorate this once ultra-high growth company. Especially since parts of the company are still growing fast… e-commerce sales in its latest quarter did soar by nearly 63%. Management has forecast sales growth for 2018 in the 10% to 11% range.

Bottom line for you – the number one item to remember regarding the tax cut is that, like all three companies I spoke about in the article, it will boost domestically-focused companies much more than it does multinational companies. Of course, multinationals have other things going for them, such as a weak U.S. dollar.

Here are other important points to keep in mind regarding the tax cut: Even for companies within a sector that will generally receive a boost from the tax cut, some companies will benefit more than its competitors. So before investing, make sure to do your due diligence to see whether a company will really get a big bump from the change in corporate taxes.

The corporate tax rate changes have effectively cut taxes for most corporations by around 40%. That’s a big deal and no bigger than for domestic companies tied directly into the coming revolution called The Singularity. In fact, it’s already here all around us transforming industry, government, education, jobs, transportation, and communication. Every aspect of our modern society is being affected. It’s been estimated that all told, The Singularity represents $100 trillion (not a typo) in wealth creation of the next seven years. The question is whether you’ll get your share of that. Check out my new FREE report, “The Industrial Singularity”, for details on how to get started. Click HERE.