The latest buzzword on Wall Street is blockchain. There is a logic to the interest since the research firm Markets & Markets forecast that the market for blockchain-related products and services will reach $7.7 billion in 2022. The market for such products was a mere $242 million in 2016.

That has led investors to jumping on anything and everything even remotely connected to blockchain technology. That can be seen in the soaring stock prices for companies that have said they are “investing” into blockchain and therefore have added blockchain to their name.

A prime example of this is Riot Blockchain (Nasdaq: RIOT), which used to be known as BiOptix Diagnostics, a small supplier of diagnostic equipment for the biotech industry. 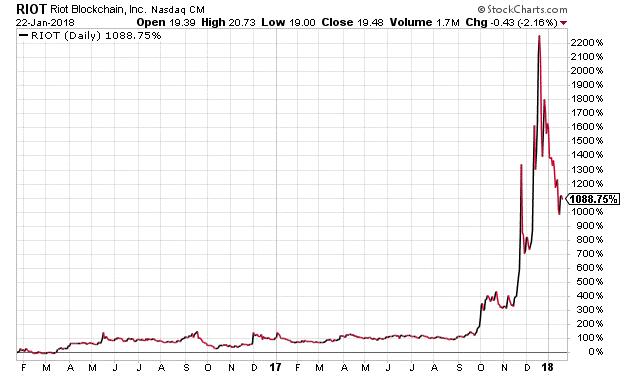 (Can you spot when Blockchain was added to the name?)

Another example is the former seller of hard ice tea – Long Island Iced Tea, which changed its name to Long Blockchain (Nasdaq: LBCC). 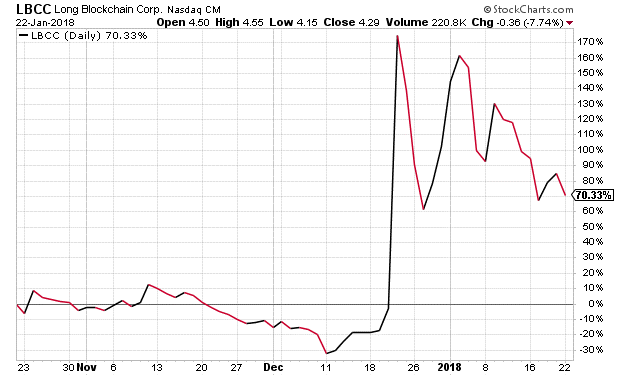 I shouldn’t have to tell you this, but I will anyway… do not buy any of these companies – one of the biggest red flags you will ever see surrounding companies in the stock market is waving now! Instead, look at companies that have legitimate blockchain businesses. Or that at least are legitimately pursuing practical applications of blockchain technology.

Related: Buy These 3 Stocks to Ride the Bitcoin Boom

For a hint about what companies you should be looking at, see what firms have either applied for, or have already received patents on blockchain technology. Not surprisingly (since blockchain can make transactions faster and more efficient), banks are among the leaders here.

Number one on the list – according to a study from EnvisionIP, a law firm specializing in analyses of intellectual property – is Bank of America (NYSE: BAC), which has applied for or received 43 patents for blockchain. 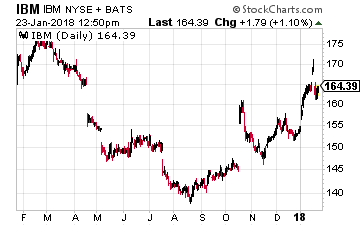 Tied for second on the list are Mastercard (NYSE: MA) and International Business Machines (NYSE: IBM). The latter was one of the very first big companies to see the promise of blockchain, contributing code to an open-source effort and encouraging start-ups to try the technology on its cloud for free. What really caught my eye regarding IBM’s blockchain efforts was a recent announcement.

Why Blockchain Is Appealing

Before I give you the details on the announcement, I want to fill you in why blockchain technology appeals to nearly every company.

The blockchain enables companies doing business with each other to record transactions securely. Its main strength lies in its trustworthiness. In other words, it’s tough to change what has been recorded. The blockchain can also hold many more documents and data than traditional database storage, and it can hold embedded contracts, such as a car lease, whose virtual key could be transferred to a bank in the event of a default.

That’s why, according to a survey done late last year by Juniper Research, 6 in 10 large corporations are considering using blockchain. Companies like Walmart are already testing blockchain technology in the hopes of streamlining their supply chain as well as speeding up payments.

A Practical Application for Blockchain 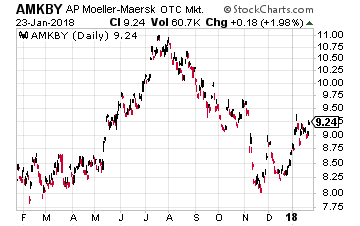 The words supply chain bring me to what I consider to be a major announcement last week from IBM and the world’s largest shipping company, AP Moller Maersk A/S (OTC: AMKBY). The two firms are setting up a joint venture to use blockchain technology in order to help make the companies’ supply chains more efficient.

The two companies estimate that businesses spend up a fifth of the cost to transport goods around the world on processing documents and related administrative costs. No wonder then that major corporations such as General Motors and Procter & Gamble are interested in joining Maersk as the first companies using the platform.

I fully expect other large corporations will join the platform. Beginning in June 2016, a pilot of this program saw companies including DuPont and Dow Chemical participate as well as the ports of Houston and Rotterdam and the U.S. and Dutch custom services.

Obviously, the hope of IBM and Maersk is that their system will set the standard for the digitalization of supply chains around the globe. Bridget van Kralingen, head of solutions and blockchain for IBM Global Industries, said to the Financial Times “There’s a lot of write-up about blockchain. But what we see is that the thing that is going to help the world is blockchain as a distributed ledger. The significance of that is huge for any transaction that has multiple parties.”

I totally agree – this is a practical usage for blockchain. Companies at different stages of the supply chain will be able to see all of the information they need about each transaction easily. Not to mention the automation and digitalization of the paperwork involved.

The proposed joint venture should be up and running within six months, with the blockchain software developed running on the IBM cloud. When it has its initial start, the venture will be tracking 18% of containerized, sea-going global trade.

Despite this important development, investors still ignore IBM as a blockchain pioneer. Maybe it should change its name to International Blockchain Machines?

For a more detailed look at the intricacies of what blockchain is and what it does, stay tuned for a special report from me in the near future.

All would’ve transformed your portfolio. Now, let me show you the next ‘blue chip of tomorrow’ about to skyrocket thanks to a coming opportunity. They’ll be needed to solve the “#1 biggest threat to our planet” according to the World Economic Forum.