With much of the U.S having just gone through what has been described by some media outlets as the coldest temperatures EVER in the Midwest, let’s talk about something on everyone’s mind, air conditioning. No, I’m not crazy. The World Economic Forum, in the midst of this major cold snap in the U.S., just published a piece on one of the predicted major drivers of energy demand growth in coming years. Yes, it’s air conditioning.

Of course, air conditioning itself isn’t suddenly en vogue when it wasn’t before. It’s a byproduct of economic growth and a rising global standard of living. While 90% of homes in the U.S. and Japan have air conditioning, that number drops to a staggering 8% for people who live in some of the hottest regions of the world. The number of air conditioners, driven mainly by populations in China, India, and Indonesia, is expected to increase over 250% in the next 30 years, to something around 5.6 billion.

Now, my use of the predicted rise in demand for air conditioning, in the midst of a major cold snap in the U.S., is somewhat tongue in cheek. But, the global rise in energy demand, which the IEA puts at between 30 and 40% by 2040, is real. And, the need to address this rising demand, be it for air conditioners, data centers, increased usage of electronic devices, or simply a rise in the standard of living, has companies and governments turning to renewable energy to solve some of the problem.

Related: How to Make Money The Cooling Way

The result, the renewable energy market is growing. Driven by both this rising demand, and fairly recent advances in technology, which have renewable energy sources rapidly approaching the cost of old school fossil fuels. Companies are increasingly profitable and projecting long-term growth in this area. Here are a few of the names I like, and recommend you take a look at, in the renewable energy sector. 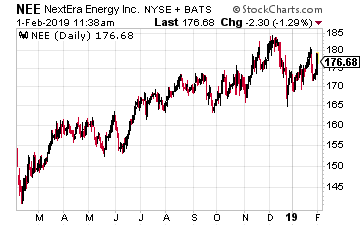 When you think of NextEra it’s highly unlikely you think of renewable energy. Most investors who know NextEra recognize them as the owner of Florida Power and Light (FPL) and one of the largest regulated utilities in the U.S. But they are much more than your average utility company.

NextEra Energy Resources, the renewable energy arm of NextEra, counts solar, wind, natural gas, and nuclear properties among its holdings. The company is rapidly moving forward on the renewable energy front, and CEO James Robo believes the cost of solar and wind generated energy will be the same as that of power generated by coal, and oil and gas fired power generation units very soon.

Robo has said that combining new energy production technology in wind and solar, combined with new technology being developed in power storage, will drive prices of renewables to the point that they will “…be massively disruptive to the nation’s generation fleet and create significant opportunities for renewable growth well into the next decade.”

NextEra has done a great job of moving from a staid electrical utility to quickly becoming the face of renewable energy on a large scale, while at the same time maintaining profitability for its shareholders.

Robo points out that by NextEra executing well on its business operations, “…FPL’s typical residential bill is more than 30% below the national average, the lowest of all 54 electric providers in the State of Florida and nearly 10% below the level it was in 2006.” And, this has been achieved, while bringing record amounts of renewable energy online in both 2017 and 2018. One of the main reasons I like the company here.

Since 2005 NextEra has delivered compounded annual growth in earnings of over 8.5%. It is expected to grow earnings this year 18.5% and pays a dividend just over 2.5%. The company’s profit margins are just over 50%, and it has a PE of just over 13.5. The company looks well positioned among the major utilities to continue expanding profitably into the renewable energy space for years to come. 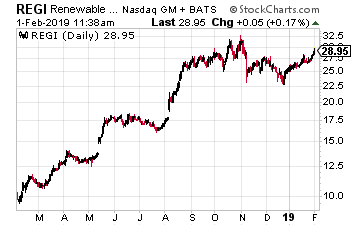 Renewable Energy Group is focused on turning your fast food remains, specifically the oil used to cook that food, into energy and profits. Using its proprietary BioSynfining technology, in the first 9 months of 2018, REGI prevented 2.9 million metric tons of carbon dioxide from release into the atmosphere. That is akin to removing 600,000 cars from U.S. highways for one year.

Renewable Energy has 14 refineries that turn vegetable oil, greases and sugars into biomass-based diesel fuel. One reason I like the company is the possibility of a new joint venture with Phillips 66 (NYSE: PSX) in which the two companies will build a large west coast biodiesel refining facility. California is one of REGI’s major customer states, and a new facility, currently planned for Washington state, alongside a Phillips 66 facility, would add valuable capacity to the Renewable Energy biodiesel offering.

Demand for biodiesel has risen 30% over the past two years, and REGI has been increasing production numbers to keep pace. They produced 11% more biodiesel in the first nine months of 2018 than 2017, and have increased production by 16% in the third quarter of 2018 alone.

REGI is also operating in a favorable regulatory environment. Despite tweets from the Commander-in-Chief negatively referencing global warming, that may have you thinking otherwise, the EPA is set to release updated regulations on biomass-diesel that would increase demand for the product. As Renewable Energy CEO Randolph Howard states, the new rules should “…ensure meaningful growth in both the biomass-based diesel and advanced biofuels category.”

In addition to these rules, and one of the reasons the company should be bought now, is a pending long term extension of the Biofuel Tax Credit (BTC). Howard says, “We’re pleased that participants across the various industries associated with biomass-based diesel remain united in the desire for a long-term extension of the BTC. This support is broad-based from feedstock suppliers, including farmers and ranchers, to producers, to blenders and, ultimately, to the end users represented largely by the trucking industry.”

REGI is projected to grow earnings 15% annually over the next five years, and has profit margins just north of 19%. Renewable Energy is well positioned as the major player in an industry that is seeing increasing demand, favorable tax and regulatory treatment, and a growing desire on the part of major players in the space to be seen as environmentally friendly. The company should continue to be the top player in biodiesel for the foreseeable future. 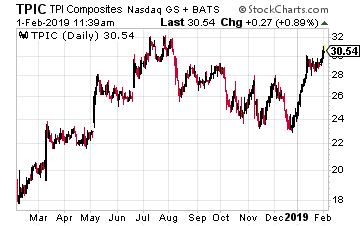 With origins in building sailboats, TPI Composites is a manufacturer of composite wind blades for wind power generation. The company has manufacturing facilities in the U.S., four cities in China, Denmark, India, Mexico and Turkey. The wind power generation business is projected to reach $100 billion by 2025, with much of that growth coming from China, where TPI has a strong footprint.

2018 was an investment and transitioning year for the company, as they invested in a large number of start-up blade lines and moved a large amount of production to larger blades. The company is on track to complete, and begin reaping the benefits of, this investment in 2019. This is one reason I believe now is a good time to buy TPIC.

Management is already seeing an above projection interest in its new lines, and CEO Steve Lockard addressed the transition year in their latest conference call stating, “While we’ve had some execution challenges and delays relating to both start-ups and transitions this year, we’re getting better with our customer support at both start-ups and transitions making them happen faster and therefore, less costly.”

It appears the company has learned from this process and is projecting more incremental changes to its products moving forward. This should reduce cost, while still improving the efficiency of its blades. Management also believes the size of current blades is close to the maximum size practicable, and that future blades will be more modular in nature, which should point to increasing profit margins at TPIC.

TPI Composites has averaged 49% earnings growth the past 5 years and is projected to grow earnings 35% annually over the next 5 years. And with this growth profile, the company trades at a PE multiple of only 11. I would like to see a higher profit margin than the current 2%, but I believe the end of the transition period in 2018, along with a move to more modular products, will address that issue.

The demand for renewable energy is rising. Whether in the form of a large utility like NextEra, a biodiesel play like Renewable Energy, or a global wind energy company like TPI Composites, you should take advantage of this rising tide, and place a renewable energy stock in your portfolio.