First though, let’s look at some of the raw numbers on renewable energy investment worldwide.

Clean energy investment globally actually declined 8% in 2018, according to Bloomberg New Energy Finance, to reach $332.1 billion, because of two factors – a Chinese crackdown on solar subsidies and the falling cost of wind and solar projects.

This latest data from BloombergNEF, considered to be the most definitive account of clean energy spending worldwide, shows that the biggest drop came in China, where renewable energy investment fell by a third after a new government policy slashed subsidies for solar projects beginning in June.

However, this is a case where a cursory glance at the raw numbers does not give a valid picture of what is going on in the renewable energy space. Actual additions globally of new wind and solar projects still increased year on year despite the decline in investment, because the costs of solar and wind energy projects have seen steep falls.

Angus McCrone, chief editor of BNEF, explained: “It’s not really a slowdown at all. Every year investment in clean energy has to run faster to stand still, because of the reduction in costs.” Renewable energy investment will fall again in 2019, he predicts, even though the amount of new capacity added will increase slightly because the reduction in costs will continue.

There is no doubt that the costs of renewables — led by solar and wind power — are now materially cheaper than they ever have been. These costs have fallen to the point at which the International Energy Agency, in its latest short term outlook, sees prices falling to between $20 and $50 per megawatt hour. That means wind and solar can compete with other fuels, even if some of the costs of providing back up to cover the intermittency of renewable supplies are included. In a growing number of markets, neither subsidies nor protected market shares will be necessary. 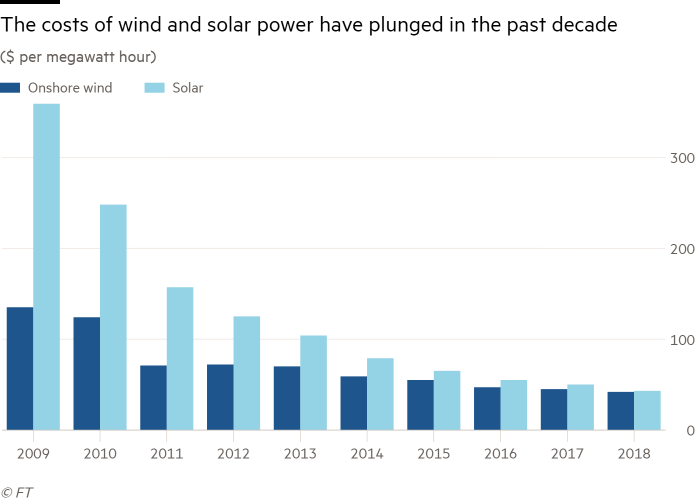 Even here in the U.S., the cost of new wind and solar power generation has fallen below the cost of running existing coal-fired plants in many parts of the country. New estimates published in November by the investment bank Lazard show that it can often be profitable for U.S. utilities to shut working coal plants and replace their output with wind and solar power.

According to Lazard, the all-in cost of electricity from a new wind farm in the U.S. is $29-$56 per megawatt hour (MWh) before any subsidies — such as the federal Production Tax Credit, which is being phased out by 2024. The marginal cost of operating a coal plant is $27-$45 per MWh.

So there are times and places where building a wind farm, even without any subsidy, would make sense. Add in the PTC, which can cut the cost of wind power to as little as $14 per MWh, and the case becomes even stronger. This turns into a win-win situation, with higher returns for the utility companies and lower bills for their customers.

Here in the U.S., the outlook for wind power is brighter than that for solar power at the moment because of tariffs placed on solar panels by the Trump Administration.

Installations of new solar power capacity in the U.S. slowed in the third quarter of 2018 to the weakest rate since 2015. The projects most affected were the large utility-scale projects, which are much more sensitive to the cost of solar panels.

These tariffs came into effect last February at an initial rate of 30% with the intent of protecting domestic panel manufacturers. But the Solar Energy Industries Association, which represents developers and installers as well as manufacturers, said the tariffs had put a brake on investment and had cost more than 20,000 jobs.

It is this apparent anti-renewable energy sentiment from the Trump Administration that has me looking to Europe for the best-performing companies and stocks in the sector. I particularly like the wind power-related companies in Europe. Here are just three of them…

Three European Wind Power Stocks You Can Buy Here in the U.S.

Europe is home to some of the world’s best wind turbine companies, which is good news since the prospects for the wind business remain sound. Installations worldwide are expected to reach 72 gigawatts per year by 2025 – a 5% compound annual growth rate. My two favorite are: 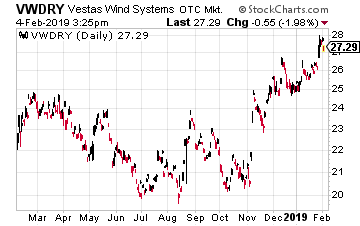 Gamesa was an independent Spanish wind company that combined its wind assets with Germany’s industrial powerhouse Siemens to form a top-notch company.

In its recently reported quarter, results were much better than expected, sending the stock soaring from a beaten-down low (there were doubters as to the wisdom of the merger). Revenue increased in the quarter by 6% year-on-year, to 2.26 billion euros, driven by the offshore wind business and by its services business. Wind turbine volume increased by 7%, to 2,129 megawatts of energy, due to the strong contribution by the offshore segment, which sold 609 megawatts (+76% year-on-year).

Net profit amounted to 18 million euros, contrasting with the 35 million euro loss reported in the same period of the previous fiscal year.

The order book stands at 23 billion euros (+8% year-on-year), of which 15.7 billion euros worth are orders to be filled after the 2019 fiscal year. This lends greater visibility to its future growth and covers 92% of the revenue target for the current year. The offshore wind business is projected to attain 27% annual growth, from 2 gigawatts of installations in 2018 to 12 gigawatts in 2025.

Vestas will announce earnings on February 7th, but it has already pre-announced good news. Based on preliminary reporting, Vestas upgraded its expectations for 2018 free cash flow to approximately 400 million euros. That compares to its prior expectation of a minimum of 100 million euros.

The company said the marked improvement was primarily driven by a strong order intake and indeed the company’s order book is at a record high, with over 10 gigawatts of orders in 2018. One example of a major order it won here in the U.S. was announced in December to supply 100 of its V120-2.2 megawatt turbines for a wind project.

Another major wind power-related company is Denmark’s Orsted A/S (OTC: DNNGY), which has transformed itself from a hydrocarbon energy company into a renewable energy company.

It last earnings report, in November, blew away analysts estimates (pardon the pun) with a 31% rise in earnings from offshore wind generation. And the company raised its guidance for 2019.

Orsted also said its green energy generation had increased substantially, with renewables now accounting for 71% of its heat and power output, up from 60% in the year ago period. It recently expanded its reach into onshore wind in the U.S. with the purchase of Lincoln Clean Energy and it also bought a U.S. offshore wind developer, Deepwater Wind.

Most of these stocks have done well, despite 2018 being a very poor year for stocks. The returns over the past year for these three companies’ ADRs are: Siemens Gamesa – 1%, Vestas – 25% and Orsted – 25%. The only laggard has been Gamesa, but it is up 35% over the past three months.

I expect the outperformance from these stocks to continue in 2019.

The No. 1 Stock to Profit From a $100 TRILLION Tech-Megatrend

A new wave of breakthrough technology has already sent stocks soaring 618%, 834%, even 2,500%. And yet Wall Street is completely oblivious to it.

Today I reveal the No. 1 stock to profit from it.