Last week the Federal Reserve Board announced another interest rate hike. The Fed increased its target short term interest rate by 0.25% to a range of 1.25% to 1.5%. The new Fed Funds rate is up from 0.50% a year ago, after three quarter point increases this year.

While many investor fears concerning higher interest rates and dividend stock values are unfounded, there are certain high yield stocks that will be negatively affected by rising interest rates. To determine whether one of your high-yield stocks is at risk of a big dividend cut, you need to determine if the company is “pitching” or “catching” when interest rates change.

A company is “pitching” in the interest rate game if when interest rates go up, the business generates higher revenues or profits. For example, over the last few years the commercial mortgage REITs and several business development companies (BDCs) have only originated adjustable rate loans. If these loans are held in the company’s portfolio –as is typical– rising interest rates will result in the growth of interest income. If the company has done a good job with its own debt by locking in interest rates, rising rates will lead to growing profits.

If a company is “catching” an interest rate increase, it has variable rate debt which will require higher interest payments due to the Fed Funds rate increase. For the period from 2009 through 2015, short term rates were very low, near zero percent for a high-quality borrower. If a company took on variable rate debt, it was like getting free capital to invest to generate revenue. However, those short-term interest rates are now increasing, which means interest expense will be increasing and profit margins could be squeezed.

The type of company that is most at risk is one which has a fixed rate revenue stream and variable rate debt. The residential mortgage backed securities (MBS) owning REITs are a good example of this type of company. These REITs are the opposite of the commercial mortgage REITs. The residential MBS REITs own pools of fixed-rate, government agency backed, mortgage backed securities. These AAA quality bonds pay fixed interest rates with current yields below 3%. To turn those low yields into double digit dividend yields, an MBS REIT borrows large amounts of short term debt to leverage up the interest rate. When short term interest rates are low this strategy produces a large amount of free cash flow. However, as short-term rates start to rise, the rate margin gets squeezed between the owned MBS bonds rates and the cost of the money borrowed to buy those bonds.

Related: When Do You Sell Good Dividend Paying Stocks?

The Fed Funds rate stood at 0.50% near the close of 2016. The rate has been increased three times since last year and is now at 1.25%. With this last Fed rate increase, short term rates will have a floor of 1.25%. Long term rates have not been increased and the 10-year Treasury yield is about 2.4% and slightly lower than where it was a year ago. The 10-year minus the 2-year Treasury rate is a common way to view the spread between short term and long-term rates. Here is the 10 minus 2-year yield chart since last December 1.

You can see the rate spread has shrunk from over 1.3% in December to less than 0.6%. For a business model based on capturing the long minus short interest rate spread, that does not leave a lot of room for profits. Especially after spending money to hedge against rising interest rates and paying business expenses. Do not believe management comments that they have hedged to protect from rising rates. Hedging only works for a short time against a portion of the interest rate change. It will not protect from a serious profit squeeze.

Here are three high yield stocks with significant variable rate debt leading to a high probability of a dividend reduction: 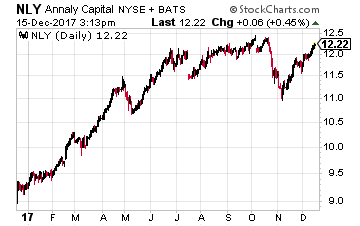 Annaly Capital Management, Inc. (NYSE: NLY) is a high-yield, agency MBS owning REIT. In its 2017 third quarter earnings report the company owned $86 billion worth of agency MBS. The company owns $10 billion of other assets, including $5 billion of commercial property mortgages. This large pile of assets is held aloft by a total of $77 billion of debt.

In the quarter, Annaly reported an average asset yield of 2.79% and an interest cost of 1.47% leaving a net spread of 0.97%. This spread was almost half of the 2.28% spread reported in the first quarter of 2016 when the Fed got serious about rate increases. The most recent 0.25% rate increase could reduce NLY’s profit margins by up to 25%. 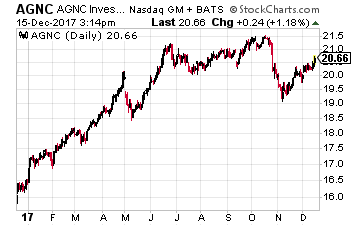 AGNC Investment Corp (Nasdaq: AGNC) is another agency MBS REIT. NLY and AGNC are the two largest companies in this REIT sector. As of the third quarter AGNC owned $52.3 billion of agency MBS. The company had $45.5 billion of debt. This works out to 8.0 times leverage of the company’s equity. Reported net interest spread was 1.41%. The company report net interest income of $0.74 per share and paid dividends of $0.54 per share.

AGNC has some cushion against higher short-term rates, but that is because the company has reduced the dividend by 10% in each of the last two years to stay ahead of fallen net interest income. You can expect another dividend cut after this or the next Fed rate increase. 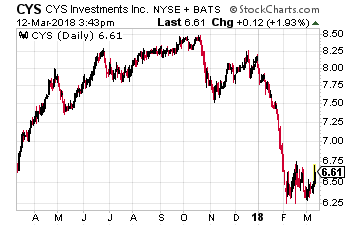 CYS Investments Inc (NYSE: CYS) is a small cap residential MBS REIT. As of the 2017 third quarter, the company own $12.7 billion of mortgage backed securities. The portfolio was leveraged to seven times the company’s equity. Reported interest margin was 1.32%. For the quarter, earnings were $0.24 per share and the company just declared a $0.25 per share dividend. With the 0.25% Fed Funds rate increase a steep dividend cut in the first or second quarter of 2018 appears inevitable.

Pay Your Bills for LIFE with These Dividend Stocks

Get your hands on my most comprehensive, step-by-step dividend plan yet. In just a few minutes, you will have a 36-month road map that could generate $4,804 (or more!) per month for life. It’s the perfect supplement to Social Security and works even if the stock market tanks. Over 6,000 retirement investors have already followed the recommendations I’ve laid out. Click here for complete details to start your plan today.