The main takeaway I got from the annual Consumer Electronics Show (CES) in Las Vegas was that enthusiasm for autonomous (driverless) vehicles among the world’s auto makers has really cooled.

Just a year or two ago, car and some tech companies could hardly restrain their excitement over the next revolution in mobility – driverless vehicles. But now, as the next step in driving automation comes closer to reality, some auto industry executives seem keen to back away from implementation and move directly on to the next step. Let me explain…

First, let me fill you in on the levels of autonomy for a vehicle as set by the standards organization, the Society of Automotive Engineers International. There are six levels of autonomy, from zero for absolutely no autonomy to Level 5, which would be complete autonomy. In other words, completely controlled by computers. This technology is probably a decade away.

Here are brief descriptions of the other levels of autonomy:

Level One: Driver Assistance: At this level, the automobile includes some built-in capabilities to operate the vehicle. The vehicle may assist the driver with tasks like steering, braking or acceleration. For several years now cars have been manufactured with controls on the steering column that allow the driver to maintain a constant speed or gradually increase or decrease speed. These functions are enacted by the driver and not automatically performed by the automobile. Most modern cars fit into this level. If your vehicle has adaptive cruise control or lane-keeping technology, it’s probably at level one.

Level Two: Partial Automation: At this level of automation, two or more automated functions work together to relieve the driver of control. An example is a system with both adaptive cruise control and automatic emergency braking. This is referred to as an advanced driver assistance system (ADAS). Examples of level two include Tesla Autopilot, the Mercedes-Benz Distronic Plus and the General Motors Super Cruise.

Level Three: Conditional Automation: This level is marked by both the execution of steering and acceleration/deceleration and the monitoring of the driving environment. In levels zero through two, the driver does all the monitoring. At level three, the driver is still required, but the automobile can perform all aspects of the driving task under some circumstances. Levels three and higher qualify as automated driving systems (ADS). There’s a big jump in capability between levels two and three. The driver still has to keep his eyes on the road, ready to take over at a moment’s notice. But a level three vehicle can handle certain parts of the trip on its own – mainly highway driving.

Level Four: High Automation: Level four vehicles don’t need a human driver. The vehicle can do all the driving, but the driver can intervene and take control as needed. This level of automation means that the car can perform all driving functions “under certain conditions.” The test vehicles currently on the road would fall under this category. Google’s Waymo is testing level four vehicles.

However, many auto companies are reluctant to even move to Level 3 autonomy. And it’s easy to see why – that’s the first point at which full responsibility — and legal liability — shifts from the driver to the car. Both automakers and regulators are wary about whether transferring control between car and driver can work effectively in an emergency.

That could lead to a legal nightmare when accidents do occur. And it’s why Audi has never turned on its Level 3 software on its vehicles sold here in the U.S.

The idea of a driverless car that can hand back control to a human with little warning has always divided the auto industry. Carmakers such as Toyota, Volvo and Ford, as well as Waymo have always been skeptical about the idea of Level 3 vehicles. These companies believe it is safer to wait longer for more advanced forms of automation that require no human intervention.

Daimler Trucks, the world’s biggest maker of commercial vehicles, also turned its back on Level 3 recently. It said that the technology sent a confusing message to drivers: they are encouraged to switch their attention to something other than the road, but expected to be ready to retake control at a moment’s notice. Other car companies, such as BMW, are moving ahead – its iNext vehicle in 2021 will feature Level 3 technology enabling hands-free, pedal-free driving.

So what companies seem best poised to benefit from the move toward greater autonomy for vehicles? 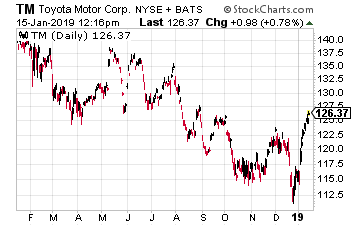 I do like Toyota Motors (NYSE: TM) because it seems to be moving on its own independent path, separate from the other automakers with regard to new technologies. I like their skepticism toward Level 3 vehicles.

And their skepticism toward electric vehicles is interesting. Instead, it is concentrating its efforts on both solid state batteries and fuel cell vehicles. I will be discussing Toyota’s and Japan’s move toward a hydrogen economy in a future article.

I find solid state batteries fascinating. They are capable of holding more electricity and recharging more quickly than their lithium-ion counterparts. These batteries could do to lithium-ion power cells what transistors did to vacuum tubes: render them obsolete. 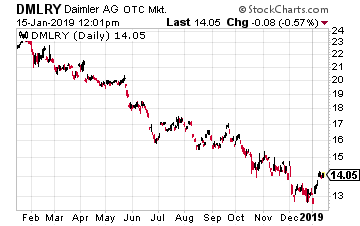 I also like Daimler AG (OTC: DMLRY). Its Freightliner Cascadia will go on sale this year and be the first truck in North America to feature partially-automated driver assistance.

And Daimler is heading straight from level two to level four, in which a truck can operate without user intervention on specific routes because the company says level three “does not offer truck customers a substantial advantage”. Unlike Tesla, it considers Level 3 to be a dead end since it would have to rely on human attention during the crucial 1% of the time after telling the driver not to pay attention 99% of the time. With truckers on long haul routes, I see sleep and Level 3 not being compatible. 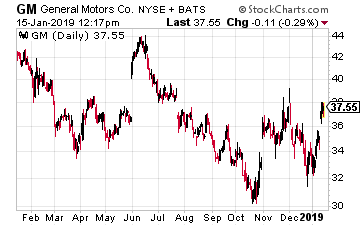 Finally, if I must go with a company that is pursuing Level 3 automation, I’ll go with General Motors (NYSE: GM) instead of the cult stock known as Tesla.

Its Level 3 system is better than Tesla’s. If the driver still doesn’t take control after several prompts, the system will gradually bring the vehicle to a complete stop, activate the hazard warning flashers, and call for help (using GM’s OnStar system.) GM also built a slew of additional safeguards into Super Cruise to try to ensure that it’s only used in circumstances it can safely handle. For example, if the vehicle isn’t on a highway, the road’s lane markings aren’t clearly visible, or the system thinks that the driver isn’t fully attentive – it won’t even switch on.

And GM is challenging Tesla in the electric car space. It is re-casting its luxury Cadillac brand as an electric brand. GM says the premium marque would be the company’s “lead electric vehicle brand and will introduce the first model from the company’s all-new battery electric vehicle architecture”. Tesla has long dominated sales of premium electric vehicles, but it faces fresh challenges, not only from the upcoming electric Cadillac, but also from European premium nameplates.

GM is making a lot of right moves, from cost cutting to getting major investments from Honda and Softbank. That led it to recently forecast higher than expected 2018 profits. It also said earnings will rise further in 2019, despite flat or declining car sales in both the U.S. and China, its two primary profit drivers. The automaker expects adjusted earnings per share for 2018 to exceed the guidance given in October of $5.80 to $6.20, and 2019 EPS to rise to $6.50 to $7.00 per share, above market estimates.

Stay tuned to this space though, the race for autonomous vehicles is just getting interesting.