It pays sometimes to listen what comes out of the annual meeting of the world’s elite at Davos, Switzerland. This year was a prime example.

Satya Nadella, the CEO of Microsoft (Nasdaq: MSFT), gave the stark warning that the world is rapidly “running out of computing capacity”. He added that Moore’s Law – the maxim that the power of computer chips doubles every two years – is “rapidly running out of steam.”

Nadella said the problems the world faces today need superfast quantum computers to solve them. As the head of the company’s quantum computing team, Todd Holmdahl, said to the Financial Times, “We have an opportunity to solve a set of problems that couldn’t be solved before. On a classical computer, they would take the life of the universe to solve.”

This is breakthrough technology that will change our world, making quantum computing (a subject I’ve touched on previously) a topic worth revisiting.

Related: Here’s Where to Invest in The Promise of Quantum Computers

Building a quantum computer has stumped scientists and engineers for about 35 years due to the complicated physics involved.

Qubits – the basic units of quantum information – are highly susceptible to ‘noise’ and therefore error. For qubits to be useful, they must achieve both quantum superposition (a property something like being in two physical states [0 and 1 in computing] simultaneously) and entanglement (a phenomenon where pairs of qubits are linked so that what happens to one can instantly affect the other, even when they’re physically separated). These delicate conditions are easily upset by the slightest disturbance, like a slight vibration or a fluctuating electric field.

Quantum computers will be particularly suited to factoring large numbers (making it easy to crack many of today’s encryption techniques and probably providing uncrackable replacements), solving complex optimization problems, and executing machine-learning algorithms. And there will be other applications no one has yet even thought about.

The cracking of encryption techniques may even push current blockchain technologies to the dustbin of history quickly. More on that later. 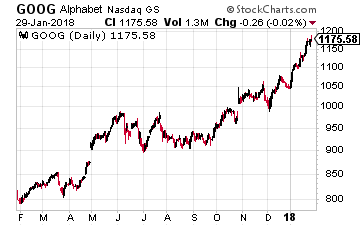 Until now, scientists have only been able to build fully programmable five-qubit computers and more fragile 10- to 20-qubit test systems. Neither kind of machine is capable of much. But the head of the quantum computing effort at Alphabet (Nasdaq: GOOG), Harmut Neven, says his team is on target to build a 49-qubit system perhaps within a year.

That would be close to the minimum target set by scientists of around 50 qubits. This 50 qubit target isn’t an arbitrary one. It’s a threshold, known as quantum supremacy, beyond which no current supercomputer would be capable of handling the exponential growth in memory and communications bandwidth needed to simulate its quantum counterpart. In other words, the top supercomputer systems can currently do all the same things that five- to 20-qubit quantum computers can do, but at around 50 qubits this becomes physically impossible.

The Threat to Blockchain

Before I tell you about some of the breakthroughs in quantum computing coming from the likes of Microsoft, let me first fill you in on the greatest threat to blockchain out there. It’s not regulations, it’s quantum computers. Let me explain…

Much of the allure of blockchain comes from its security benefits. The technology allows a ledger of transactions to be distributed between a large network of computers. No single user can break into and change the ledger, making it both public and secure.

Even if today’s supercomputers tried to figure out what the private key is, it would take it an estimated 785 million times longer than the age of the universe. In other words, it’s impossible. But with quantum computers possibly 100 million times faster than classical computers, they could possibly break today’s public key cryptography, rendering the blockchain technology that relies open to hacking and obsolete.

So naturally research into quantum-resistant cryptographic systems has already begun at places like the National Security Agency (NSA). But I doubt these systems will be available before the advent of quantum computers.

Breakthroughs Around the Corner 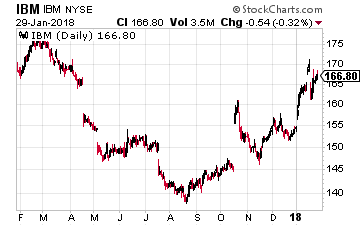 That is thanks to efforts from companies like International Business Machines (NYSE: IBM), Google and Microsoft, which make quantum computers likely and commercially viable within several years. Previous estimates were that quantum computing was still decades away.

But two impending milestones – from Microsoft and Google – will show that the frontiers of theoretical physics are quickly being turned into practical reality. Google’s revelation involves that aforementioned machine that will be the first demonstration of quantum computer solving a problem that is at the very limit of what is possible for a classical computer.

IBM has been a pioneer in the field and actually achieved a working qubit in 1998. It announced in December a long list of partners to help it develop practical applications for the technology. The partners include a number of universities, government research institutions and major companies, such as JPMorgan.

I would say that IBM is ahead of Google in that it has already programmed a supercomputer to simulate a quantum machine with more than 50 qubits. A feat, I might add, most did not think was possible.

Both Microsoft and IBM are offering simulations of quantum computers that run on today’s “classical” machines, while IBM is also giving its partners access to a rudimentary quantum system.

Now let’s focus on Microsoft, which began working on producing a working qubit (quantum bit) 12 years ago. And now finally, it is “imminently close” to announcing that it has reached that goal.

I find Microsoft the most interesting of the three leaders in quantum computing because of the unique approach it is taking. It apparently has developed a type of qubit that effectively fragments electrons. That means the same piece of information is held in multiple places at the same time. If one part of the qubit goes through quantum decoherence, the information it contained is not lost.

This will likely lead to a more stable system than its competitors’ systems. Microsoft will likely need only one qubit compared to 1,000 or 10,000 (mainly unstable) qubits.

For me, if Microsoft does indeed reveal that working qubit, it will place them ahead in the race for quantum computing supremacy. It would be my choice as a major future beneficiary of quantum computing.

But don’t forget about Google and IBM, as well as Intel and the Canadian private firm, D-Wave Systems. All are working on developing the leading computing technology.